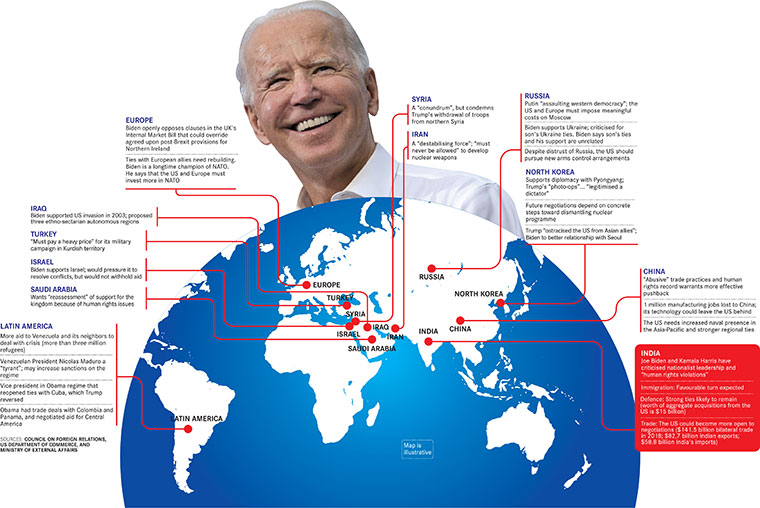 As US president, Joe Biden cannot pick up from where president Barack Obama left off: there is neither a United States of America nor a Pax Americana.

Swinging across the globe like a wrecking ball, President Donald Trump demolished national unity and US-led international solidarity. With Biden at the helm, says foreign policy expert Anne-Marie Slaughter, “the chaos, at least, is over”. “Would US foreign policy actually change? In action, substantially but not completely. In style, dramatically,” she says. 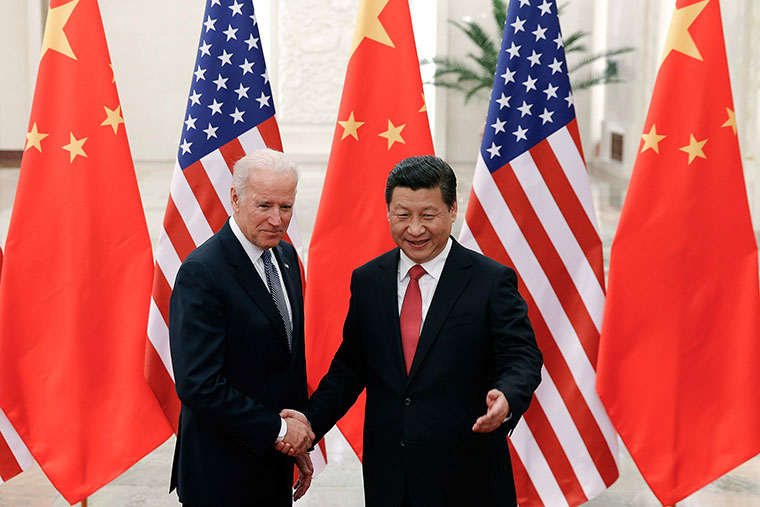 In style, decency and diplomacy will replace Trump’s slurs and erratic confrontations, which like the coronavirus, aggravated underlying conditions. Biden is no vaccine, but he will calm the global infection of feverish rhetoric and politics. “We have to prove to the world that the United States is prepared to lead again—not just with the example of our power, but also with the power of our example,” said Biden. Obama-style action is distant, but the lofty rhetoric is back.

Biden and his running mate, Kamala Harris, have a lot of repairing to do first. The Biden-Harris administration’s focus is grounded in its two campaign slogans: “Build back better” and “Battle for the soul of the nation”. Biden was inspired by Pulitzer prize-winning author Jon Meacham’s book and documentary The Soul of America, which explains: “Soul is the essence of who we are. It is the constant struggle between our better angels and our worst instincts. Do we build walls or build bridges?”

Trump built walls, while building bridges comes naturally to Biden, whose personality strengthens America’s soft power. Empathy, his strong point, comes from personal suffering. Throughout childhood, Biden was tormented for his stutter, which caused many “gaffes”. He lived with mean nicknames. He has mastered the neurological defect, but still occasionally suffers word blocks, which critics cruelly attribute to senility or stupidity. When he got stuck on Obama’s name, he sidestepped to say, “my boss”, but was taunted for forgetting his boss’s name. Biden once said, “Stuttering gave me an insight into other people’s pain.” Like all American presidents, Biden will be hard-headed, but he also understands the shame of a stutterer and the anguish that comes from losing family members horrifically to car crash and brain cancer.

Affable and folksy, Biden sees the need to put America together, which is like a house ripped apart after Trump’s visitation. Editorialised The New York Times: “Trump has intensified the worst tendencies in American politics. Under his leadership, the nation has grown more polarised, more paranoid and meaner.”

Experts agree that foreign policy derives legitimacy from domestic reform. “Biden’s foreign policy stands on three Ds—domestic [politics], deterrence and democracy,” said Slaughter. His domestic priority is to unite the country, heal racial divisions, revive the economy, reduce inequality, and repair the broken state, society and infrastructure. Creating jobs is a priority, to be achieved by transitioning to green energy, opting for fair not free trade, prioritising American over foreign workers and keeping industrial supply chains in or near America. “Our policies at home and abroad are deeply connected,” says Biden.

The second D is a 21st century version of deterrence. Not a la Soviet Union, but deterring disparate nations—Russia, China, Iran and North Korea—from trespassing nuclear limits, encroaching on American hegemony or targeting nations with disinformation.

The third D is democracy, which has been on the backfoot globally. Historically, the pendulum shifts from left- to right-wingers and back. Biden intends to push back far-right forces while bolstering liberals. He will convene a global summit for democracy. Together, says Biden, democracies “must confront the rise of populists, nationalists, and demagogues. By presiding over the most corrupt administration in modern American history, Trump has given licence to kleptocrats everywhere.”

Europe will be happy if Biden did nothing more than roll back Trump’s policies and replace the current loose cannons with professional ambassadors. Biden will roll back, but not everything. He is not expected to return Israel’s capital to Tel Aviv. Nor will he ease pressure on Europe to increase its defence expenditure—pressure first applied by Obama. 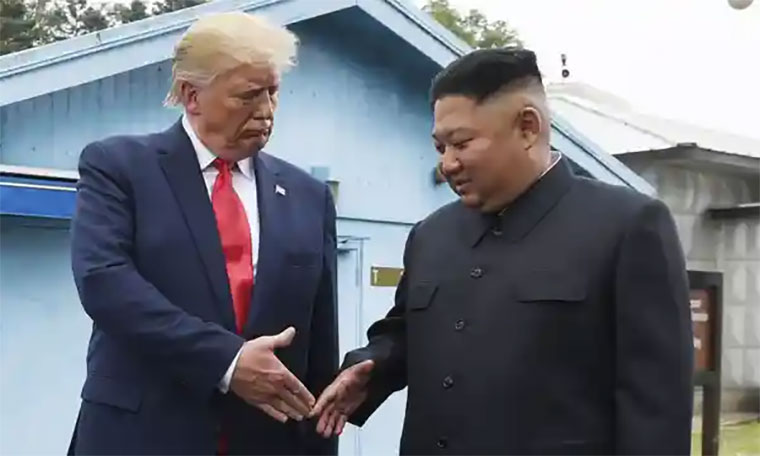 But to Europe’s relief, Biden will re-embrace multilateralism to unitedly tackle international problems—from pandemic to rogue states, climate change to Big Tech. There will be international coordination on security challenges, from North Korea, Iran and Syria to Afghanistan and Venezuela. The US will return to the Paris Agreement, though a return to the Iran deal will not happen without hard-nosed diplomacy.

Biden will end the “forever wars” in Afghanistan and the Middle East, and bring troops back home gradually. He promises to end American support to the unconscionable Saudi-led war in Yemen, which the UN labels a “humanitarian catastrophe”.

China remains crucial for American foreign policy. The Chinese jokingly referred to Trump as “jianguo” (he who builds up China). They must find a new name for Biden, who will likely be coherently tougher on China mainly because there is bipartisan support for this in the US Congress. Unlike Trump’s solo wrecking-ball excursions, Biden will lead a concert of democracies to “confront China’s abusive behaviour. When we join other democracies, our strength more than doubles. China can’t afford to ignore more than half the global economy.”

Using diplomacy and not tweets, the coalition of democracies will squeeze China on issues ranging from cyber-raids to state subsidies to industries. As defence secretary candidate Michèle Flournoy said, the US must “re-establish credible deterrence of China”.

Harris lends weight to pressure China on issues ranging from erosion of democracy in Hong Kong to human rights abuses, especially the Uyghur prison camps in Xinjiang. Though her identity is transformational, Harris’s foreign policy positions are conventional. Of China she said, “It’s a complicated relationship. China steals our products, including our intellectual property. They dump substandard products into our economy. They need to be held accountable. We also need to partner with China, on climate change, non-proliferation, global health and North Korea.”

China’s state-run Global Times expects Harris to be “harsh” on China, escalating the “who-is-the-toughest-on-China competition”. Like the devil quoting the scripture, Global Times echoes Trump referring to Harris as the “meanest” US senator.

How mean a defeated Trump gets will be revealed by how he handles the 77-day transition period before leaving office on January 20. “People who have worked with Trump compare him to a mafia boss,” said historian Garrett Graff. “The Trump transition might be the start of the wildest chapter of an already controversial presidency.”

Previous presidents have pardoned activists and friends. Trump could pardon himself (as a shield to creditors, court cases and investigations), his family, friends, cronies, convicted felons and media accomplices. He can also sabotage the incoming administration by mass-firing of top officials, destroying records, signing decrees, settling political scores, initiating covert operations, or launching unilateral military strikes—actions that prove there is neither a Pax Americana nor a United States of America. The grand finale of his presidency could see Trump succumbing to his worst instincts. That makes it harder, but more urgent, for Biden to fight for America’s soul.

Previous presidents have pardoned activists and friends. Trump could pardon himself (as a shield to creditors, court cases and investigations),
his family, friends, cronies, convicted felons and media accomplices.