With its entry into the DCOC, India gets a toehold in China’s glowing pearl, Djibouti 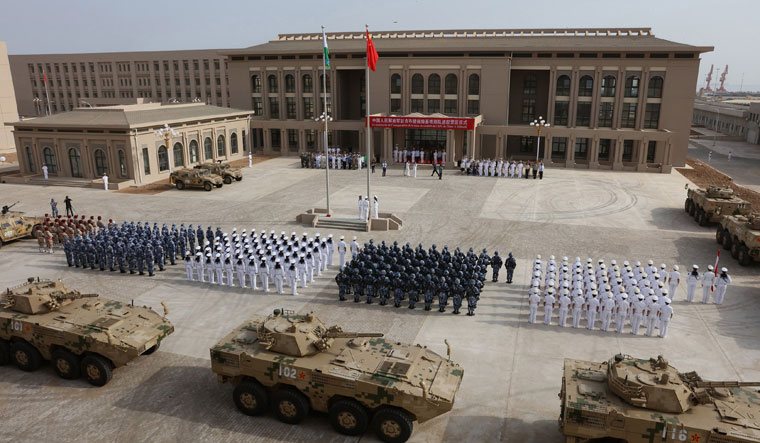 Power move: The inauguration of China's military base in Djibouti in 2017 | AFP

Last month, India got observer status in the Djibouti Code of Conduct/Jeddah Amendment (DCOC/JA). It is a little-known multilateral grouping that hinges around a country the size of Manipur and a population of less than 10 lakh. Djibouti has risen to importance because of its strategic location in the Horn of Africa, at the chokepoint of the Gulf of Aden and the Red Sea. This part-membership gives India a toehold into a country where China stole a march against almost the entire world by making Djibouti one of the most important baubles in its grand String of Pearls.

The DCOC is a grouping on maritime matters, comprising 18 nations adjoining the Red Sea, Gulf of Aden, east coast of Africa and island nations of the Indian Ocean Region (IOR). It was established in 2009 to repress piracy and armed robbery against ships. The Jeddah Amendment 2017 enhanced its scope to include repression of illicit maritime activity, including maritime terrorism and illegal, unreported and unregulated fishing. Along with India, the UK, US, Japan and Norway have observer status, too. According to the ministry of external affairs, the position does not have a fixed term.

Djibouti’s importance has been rising over many years, given the volume of international trade that passes into the Indian Ocean via the Red Sea. But in 2015, the world snapped into attention as China began building a military base there. The three big choke points for Chinese maritime traffic are the Strait of Hormuz, the Strait of Malacca and the Gulf of Aden, said vice admiral Shekhar Sinha (retired). With Gwadar in Pakistan, and a few long-lease islands from Malaysia, China has secured the first two points. Djibouti takes care of the third.

Djibouti was yet another missed opportunity for India that China took advantage of. In 2002, Djibouti, with which India has good ties, was in need of developmental assistance. “The India Navy was in favour of accepting this offer for developing Djibouti, as it would help us secure the sea lanes of commerce,” said Sinha. “[But] back then, India was not outward-looking. We suffered from what the Americans call ‘sea blindness’.” 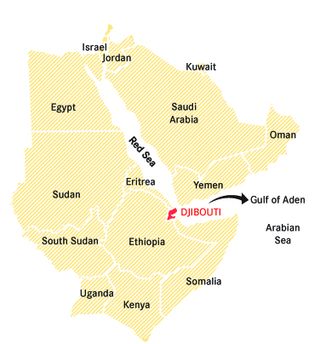 Map is for illustrative purposes only

China, meanwhile, began steadily investing in various infrastructure projects in Djibouti. It now controls the Djibouti International Free Trade Zone, Dolareh Container Terminal and Djibouti Port, and thus, the country’s economy. The Chinese military base is around 60.7 hectares, with facilities to house 200 marines, wrote rear admiral Monty Khanna (retired) in a paper for Observer Research Foundation. The facilities are constantly evolving. A notable development is the construction of a jetty which, when ready, would cater for a deep-water military berthing facility, a huge fillip to China’s capabilities there.

India is not a significant adversary in China’s global plan. Its String of Pearls and Belt and Road Initiative are gamechangers in challenging the US’s global influence. However, for India, the IOR is a very important space as it is the biggest country in the region. With the current dispensation having given the maritime region some importance, Djibouti is a crucial location for India to beef up its presence.

Prime Minister Narendra Modi’s vision of Security and Growth for all in the Region (SAGAR) has given a boost to India’s maritime outreach. India is engaged in multilateral cooperation with countries in the Indian Ocean Rim Association, Indian Ocean Tuna Commission and Indian Ocean Naval Symposium. Last November, at the East Asia Summit, India proposed the Indo-Pacific Oceans’ Initiative for a safe, secure and stable maritime domain. India wants to enlarge its footprint in waters where Chinese presence is increasing.

In a dynamic global situation, where the seas have regained importance, India is warily joining groupings to keep China under check in regional waters. The Indo-Pacific concept may be one of growth and development with the centrality of ASEAN, according to India, but there can be no ambiguous couching of a grouping like the Quad (US, India, Japan and Australia), which has scaled up to foreign minister-level summits.

India’s recent logistic sharing tie-ups with the US, France, and Japan also gives it access to base facilities at Djibouti, where France and Japan both have a presence. India has been patrolling these waters regularly since 2008, with one warship always on deployment in the western Indian Ocean region. China, too, has maintained the presence of at least three ships in these waters. Such heavy military presence has reduced piracy here; piracy has shifted to the west coast of Africa in recent years.

Observers view the DCOC entry as a positive move. They note that India so far has only access to information on white shipping (commercial), and tie-ups like DCOC which will give India access to grey (military) shipping activities, too.

For India, perhaps, such tie-ups are a better way of information and logistic sharing than expensive development projects whose benefits may not be that forthcoming. The Chabahar project in Iran, for instance, is only a commercial tie-up. Its expansion is under a cloud now with the US-induced tension in India-Iran ties. Chabahar, anyway, was no match for China’s influence in Pakistan’s Gwadar Port. China has now extended finances to Iran for port and infrastructure development. The Bandar-e-Jask project at the northern end of the Strait of Hormuz in Iran is set to be the next pearl in the Chinese necklace.