I fear for Hindus, even in Europe and America 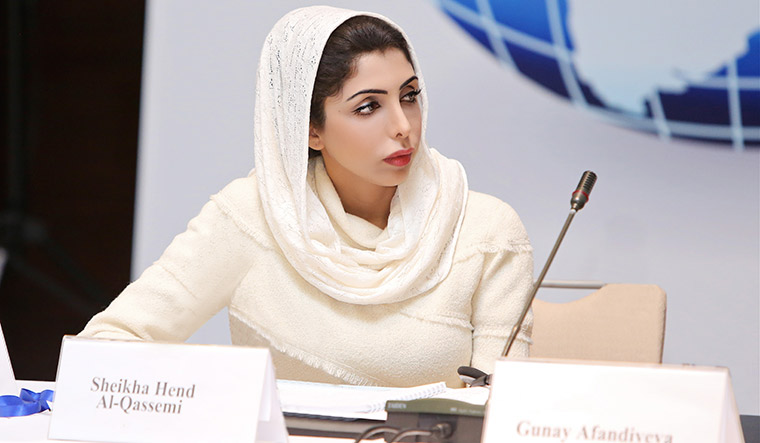 Princess Hend Al Qassimi has become the woman of the moment by taking on Indian entrepreneur Saurabh Upadhyay for his anti-Muslim comments on social media. Al Qassimi, who is a member of the royal family of Sharjah, warned that Upadhyay’s anti-Muslim remarks were not welcome in the UAE. She also wrote an article in a leading Gulf newspaper, criticising the growing “animosity against Muslims in India”. The issue turned quickly into a major diplomatic crisis, forcing India to initiate steps to protect its cherished ties with Gulf states. In an exclusive interview with THE WEEK, the princess said that a Nazi-like situation was emerging in India, which could hurt Indians across the globe.

Q/ Why did you choose to speak out?

A/ What is happening in India is not new. It has been going on for the past few years. Recently, the voice of hate has become louder and now we [see it translate into] action against Muslims, Christians and minorities. A single, select sect of Hinduism has been made the hero and the rest has become untouchable. This is the India that Gandhi tried to abolish. Suddenly, we see this Nazi-like system emerging. There is nothing Indian about it. There is nothing Hindu about what is going on.

I have to admit that certain things that happened in the name of Islam was not very Islamic, like the destruction of temples. Muslim scholars will not like this, but it has to be said. In Islam, it is clear that no temple, church or synagogue can be destroyed, especially during a war. No priest must be hurt. Women and children must not be hurt either. Even a tree must not be cut…. I am talking specifically about the Mughals. But you have to remember that the Mughals were descendants of Genghis Khan, not Prophet Mohammad. Now, 700 years later, the Babri mosque was destroyed. It was wrong, because it was eye for an eye. But I can understand because it was raised on the ruins of a Hindu temple. What I cannot understand is the boycott of Muslims.

A/ People in the UAE are becoming aware of what is happening in India, the way Muslims are treated there. People are shocked and upset. They are waiting for this damage to be undone. I have read that India is building detention camps. In China, there are 1.8 million Uighur Muslims, who are in concentration camps, called labour camps or detention camps. It is disturbing that it is happening in India, which, like the UAE, is a melting pot. We draw inspiration from India.

Indians have always been welcome in the UAE because we have never felt Indians regard us as competition or as the enemy. India and the UAE have strong links and an abiding friendship. I hope this violence and [Islamophobia] stop and India goes back [to its more pluralistic tradition].

Q/ Do you think the Indian government has done enough?

A/ Unfortunately, the Indian government has not [done enough]. I am very disappointed. They think by ignoring it, [it will go away]. But [awareness is growing] not only in the Arab world…. The highest number of Muslims is in Indonesia. Do you think Muslims of Pakistan, Bangladesh and Malaysia will be quiet about this? The repercussions will be felt not only by Hindus in India…. It will have a domino effect.

Q/ So, India has a reason to be concerned.

A/ India does have a reason to be concerned. Even if the leaders are quiet about it, do you think the people will be? They won’t. I fear for Hindus, even in Europe and America. They will be viewed as neo-Nazis. [Islamophobia] will not go [unnoticed].

Q/ Will Indians in the UAE face backlash?

A/ The UAE is a very tolerant country. But now there is distrust towards Hindus. This was not the case before. There has also been a number of cases of Indian businessmen declaring bankruptcy and running away. Indians are hardworking people. They don’t deserve to be labelled as Nazis. India is the only country which has never invaded another country. Look at how China invaded Tibet. Now Buddhist monks are not even allowed to practice their religion. India, however, welcomed the refugees.

Q/ Do you blame the BJP or the sangh parivar?

A/ I don’t know enough about Indian politics. Even when I spoke up [on Twitter], I was [accused] of defending the Tablighi Jamaat. I don’t even know what that is. I know they are Muslims. I was more concerned about this guy [Upadhyay] attacking my religion, my prophet, my country, my livelihood and my ethnicity. I just hope [the anti-Muslim sentiment in India] ends soon. I am sure it can be corrected.

Q/ How difficult was it to speak out?

A/ My mother simply reminded me, “Don’t say anything rude. But you have to speak truthfully.” India is our home. When I went to India, I felt I was with my family, even when I was living in a hotel. It is very heart-warming. All I can do is voice my concern. It breaks my heart when I see news [of discrimination]. I would not like to say that it makes me angry. Because then I will be no better.

Q/ Are you planning another trip to India?

A/ I hope to come soon after the Covid-19 pandemic. My father speaks fluent Hindi. He lived in India for two years.