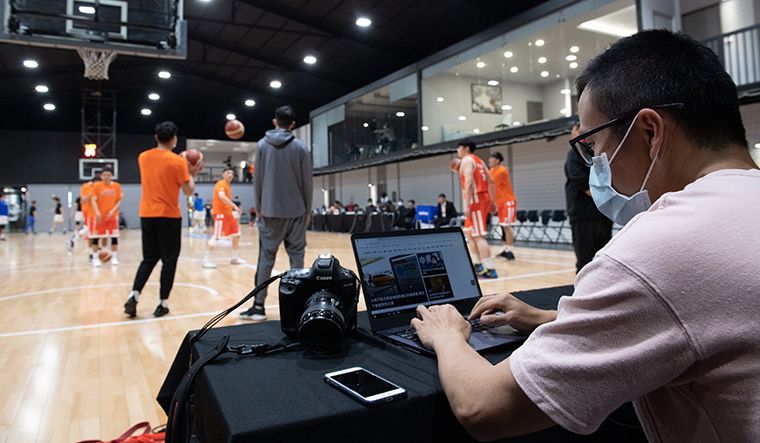 Safety first; A basketball game in progress in New Taipei City on April 14. Only staff and journalists wearing masks were allowed entry into the stadium | Getty Images

Once bitten badly, twice shy. Learning from the past has paid rich dividends for Taiwan in its war on Covid-19. Taiwan is only 130km from China and more than 80,000 people travel between the two countries every month. It was no surprise that Johns Hopkins University predicted that Taiwan would have the world’s second most Covid-19 cases.

But Taiwan has emerged one of the most efficient countries in terms of Covid-19 treatment, with just 425 cases and six deaths among a population of 23.7 million. On April 14, Taiwan’s Central Epidemic Command Center (CECC) announced that for the first time in 36 days there was no new case to report. A few cases have cropped up since then, but still within control.

Taiwan had warned the World Health Organization in late December about Covid-19. But it says the warning was ignored. The WHO does not recognise Taiwan because of objections from China, which says the island is a breakaway province. Taiwan’s already fraught ties with the WHO worsened further with the Covid-19 crisis. WHO director general Tedros Adhanom Ghebreyesus complained recently that Taiwan’s foreign ministry was linked to a hate campaign against him, which included racist attacks and death threats. Tedros, a former Ethiopian health and foreign minister who was elected to the top post with strong support from China, has strongly endorsed the Chinese position on the pandemic. It has led to a geopolitical tussle, with US President Donald Trump repeatedly blaming China for the pandemic. Trump has suspended US funding to WHO and has blamed the world body for ignoring Taiwan’s early warning about Covid-19.

Taiwan, meanwhile, had drawn all the right lessons from its 2003 SARS outbreak experience, so much so that it started preparing for the Covid-19 pandemic even before the official declaration. According to Dr Steve Kuo, former head of Taiwan’s Center for Disease Control (CDC), the SARS outbreak was a wake-up call for Taiwan. Kuo had led the SARS taskforce in 2003 when the epidemic caused hundreds of Taiwanese to fall ill, and more than 70 died—the third-highest tally in the world. Since then, the Taiwanese have kept themselves prepared.

Kuo said that Taiwanese authorities were monitoring social media networks, and towards the end of 2019, they picked up chatter about a strange outbreak being referred to as “atypical pneumonia”, around China’s Wuhan area. Wasting no time, Taiwan sent two CDC doctors to Wuhan to analyse the situation.

Measures were set in place immediately. Every passenger arriving from the mainland was being checked for symptoms of any disease. If they showed any symptoms, there were further tests. Passengers who had travelled to Wuhan in the preceding weeks, too, were subjected to further testing.

On January 20, the government activated the National Health Command Center that was set up during the SARS epidemic. The centre enables the government to communicate among departments, using a range of data. All arriving passengers were asked to register online in the incoming citizens’ database. They would then receive text messages of where to get checked before they crossed immigration control.

From there, the government would monitor those with symptoms. Once a passenger’s belongings had been disinfected, her trip home would be in a government-provided cab all by herself. Once home, she would have to self-isolate for two weeks.

Health authorities would call these home-quarantined travellers twice or thrice a day to check on them. If their symptoms worsened, they would be moved to a hospital; if they were all right, they would be provided with essentials. A big fine was imposed on those who violated quarantine. It was all done at the state’s expense, so there were no complaints. In hospitals, the triage system was followed.

In a flash, the central command centre launched border restrictions, set up local quarantine rules and turned to technology. One phone app helps residents find stores with masks in stock. Another app provides information on all those who are Covid-19 positive, like the places they visited and the history of their cases. The government has also ensured that it has sufficient medical equipment and high-end negative pressure chambers for isolation cases to be put in. The law, amended after the SARS outbreak, requires hospitals to have stockpiles of all medical supplies for at least 30 days. The government took charge of making and distributing masks, even rationing them.

Disinfectants could be found in all public places. Thermal scanners monitored those walking into public buildings. Those with high temperatures were immediately asked to go home and rest. The idea of physical distancing was also taken seriously by the people, which played a big role in containment. The handling of Covid-19 has proven Taiwan’s expertise on international health issues, which in turn has boosted the people’s trust in the government.

The country is lending a hand to others, despite not being a UN member. Taiwan donated 1.6 crore surgical masks to medical workers worldwide, and is working with the US and the EU to develop fast-screening kits and vaccines.

There has been some luck involved as well. Going by the statistics from the ministry of health and welfare, Taiwan does not have the ability to carry out large-scale testing. Currently, the country is expanding its test capacity to 34 centres, with a maximum capacity of 3,800 tests per day.

Much of the preparedness for public health is about having the right infrastructure one could activate during a crisis. In this aspect, the Taiwanese invested wisely.