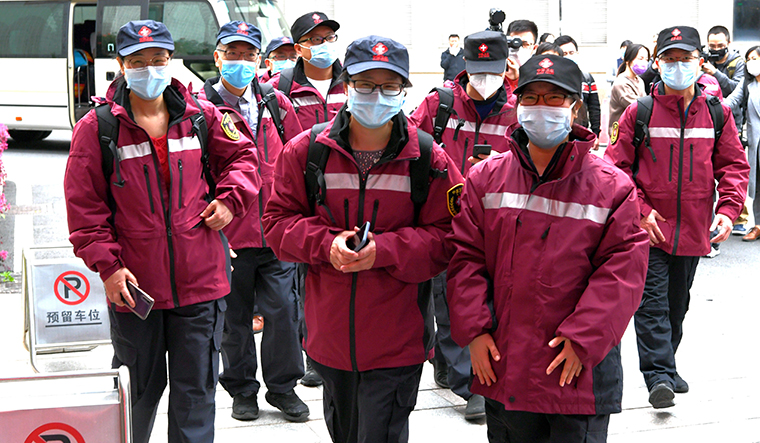 Saviours in red: Members of a Chinese anti-epidemic medical expert team setting out to Italy on March 25 from Fuzhou in Fujian province | Getty Images

The Chinese propaganda machine has been on an overdrive over the past few weeks, trying to justify how the country handling of the Covid-19 crisis. “China’s efforts and sacrifice have bought precious time for the world,’’ tweeted the Chinese foreign ministry spokesperson. “Some people are attempting to make China the scapegoat for their own epidemic response. Mission Impossible.’’

The reference to the Hollywood movie was seen as a message to the United States, which has been leading the campaign to pin the blame on China. President Donald Trump used to refer to Covid-19 as “Chinese virus’’. A recent meeting of the G7 foreign ministers concluded without a joint statement after Secretary of State Mike Pompeo insisted on calling Covid-19 the “Wuhan virus”.

China, meanwhile, has been focusing on ‘mask diplomacy’, flying planeloads of medical supplies to affected countries ranging from Nepal to Italy. The Chinese private sector is also quite active, with Alibaba co-founder Jack Ma joining hands with the government in organising relief supplies.

“Do those speaking ill of China rather want us to stand by while other countries suffer? No. It is our tradition to reciprocate kindness and help those in need...,’’ a Chinese foreign ministry spokesperson tweeted on March 31.

“China has taken to rebutting American accusations,’’ says Alka Acharya, professor of Chinese studies at Jawaharlal Nehru University, New Delhi. “The Chinese point out that the US did not inform the world about the H1N1 outbreak. And, they have launched Covid-19 diplomacy by playing the role of the serious, responsible power in the time of crisis.’’

China even reached out to India as part of its diplomatic initiative. On March 25, Foreign Minister Wang Yi called up Minister of External Affairs S. Jaishankar. In a series of tweets, Chinese Ambassador Sun Weidong praised India’s capability to win the battle against Covid-19. He said Wang criticised naming the virus after China and that Jaishankar agreed. The Indian foreign minister, however, did not completely endorse the Chinese line. “Global challenges require global cooperation,” tweeted Jaishankar after the conversation.

“We do not want to take sides,’’ says Jayadeva Ranade, former additional secretary, cabinet secretariat. “We will take a safe line as we are still in the thick of it. We cannot shut out the sources of gloves, masks and supplies, because we are going to need them.”

As cases began to rise exponentially, even the Americans had to turn to China for help. The first of the 22 planned consignments from China landed in New York on March 29. The shipment, which included 1.3 lakh N95 masks, 1.8 million face masks and gowns, 10 million gloves and thousands of thermometers, was the result of a public-private partnership led by Trump’s son-in-law and senior adviser, Jared Kushner.

While China leads the relief measures, there have been complaints about the quality of its supplies. The Slovakian government rejected Chinese test kits worth $16 million, as those could not detect the infection in its early stages. Spain, which purchased 50,000 kits, too, had the same complaint. Turkey says Chinese tests are only 35 per cent accurate. Czech authorities found out that the Chinese tests worked only on cases where the infection was at least five days old. These countries are also angry that China calls the supplies aid, despite charging for them.

“China’s relationship with the west was already worsening,’’ says Jabin Jacob, Chinese expert at Shiv Nadar University. “This pandemic and the Chinese government’s role in letting it spread beyond the country’s borders will make things worse. And not just with the west, but with other countries as well, depending on how affected they are. China might find that its aid diplomacy will not always work.’’

There are also allegations that Covid-19 is a bioweapon developed by China, although most experts have discounted the possibility. “There is no evidence that this is actually a manufactured virus or a bioweapon,’’ says virologist Shahid Jameel, chief executive officer of Wellcome Trust/DBT India Alliance. “If a virus is deliberately modified, there will be signatures which look very different from evolutionary signatures. Evolution is a slow and continuous process; modification is abrupt. Multiple experts have done that sort of analysis and found that this was not a modified virus.’’

China has launched its own campaign, saying the infection came from American soldiers who visited Wuhan for the Military World Games last October. “It is unlikely that anyone outside China will buy this,’’ says Jacob.

Most observers, however, agree that China kept the news about the infection a secret for at least two months. “The Chinese authorities were covering it up,’’ says Ranade. China allegedly knew about it since November, but it was only by the end of January that it told the world about the person-to-person transmission of Covid-19. The pandemic has also highlighted the failure of the World Health Organisation, which allegedly sought to whitewash China’s role and co-authored with it a report on the outbreak. “WHO knows who controls the purse-strings,’’ says Acharya. Even the UN Security Council, caught in the US-China spat, has failed to respond effectively to the pandemic. China’s presidency of the 15-nation Security Council ended on March 31. Does that spell hope? “Unlikely,’’ says Jacob.

Jameel, meanwhile, says Covid-19 is unlikely to be the last pandemic. “We should be prepared for the next one. We can do that only with knowledge and technology, for which research is crucial.”