Elizabeth Warren is fighting for all Americans, says her son-in-law from Uttar Pradesh village 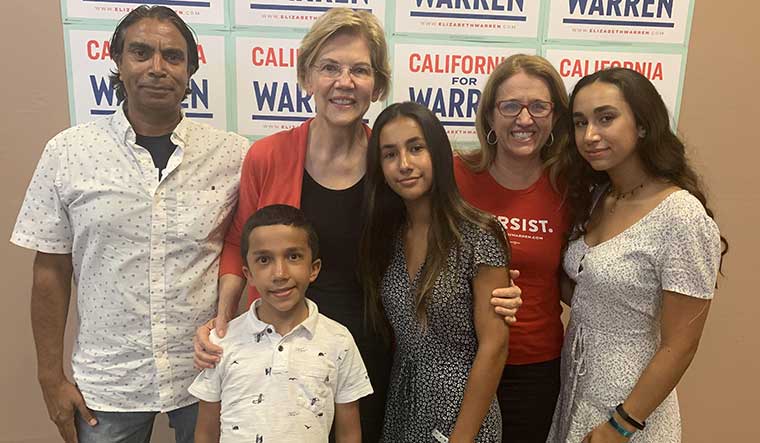 United front: Sushil Tyagi, his wife, Amelia, and their children with Elizabeth Warren at a town hall event in Los Angeles.

Two of the Democratic contenders in the 2020 US presidential elections have strong ties with India: while Senator Kamala Harris from California had an Indian mother, Massachusetts Senator Elizabeth Warren’s daughter, Amelia, is married to Indian American entrepreneur Sushil Tyagi. Along with former vice president Joe Biden, Warren leads the list of Democratic hopefuls.

Tyagi was born in Khatauli* village that is on a rural path off the main road that goes between Deoband and Saharanpur. He never had a settled childhood as his father, who was a policeman, was transferred frequently. But Tyagi was a bright student and he went on to study civil engineering at IIT Delhi. He completed his studies at the University of California, Berkeley and the Wharton School in Philadelphia. He now serves as president of Berkeley Marine Robotics, an ocean exploration and conservation company. He has also dabbled in film production and was involved with movies such as Hari Om (2004) and Samsara (2011).

In an exclusive interview with THE WEEK, Tyagi opens up for the first time about Warren, calling her a fighter who knows exactly what families go through every day in America. He hopes to assist his mother-in-law in overturning the Trumpian model of American political life. Indian Americans are getting involved in the Warren campaign through the recently-launched Warren India Network (WIN) whose lead supporter is California lawyer Navneet Chugh. Excerpts:

Q/ Can you tell us about your early life?

A/ I am originally from a north UP village, which is so small and unknown that it still does not have a post office or a bus service. Like most children of smallholder farmers, I grew up taking the cattle to the ponds and sugarcane carts to the crushers. My mother never went to school and could not read or write.

Since there was very little farmland, my father joined the UP Police as a constable. He was initially posted in such remote places where there were no schools or where he could not afford to keep a family. So I was sent to our relatives’ villages to continue at local schools.

As was the norm in the state police, my father was transferred every few months to various small towns. I lived most of my childhood near those police stations and constantly shifted to new schools. Sometimes, I was even left behind with a teacher’s family to finish a year’s class. It was after more than 12 different schools that I completed final grades and that just happened to be in Dehradun. A decade later, I helped my parents build a house there and adopted it as my hometown although, as you can see, I do not really have one.

Q/ You studied at IIT Delhi. Why did you decide to move to the US? 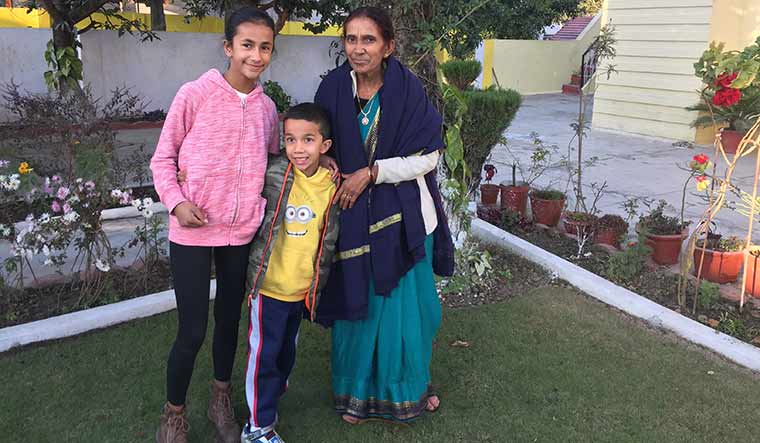 A/ As no one in my extended family had gone to college, and no one around me even knew of IIT back then, it was quite a lonely path for a Hindi medium kid to embark on JEE (Joint Entrance Examination) preparation, although it was under the relative luxury of a gas lantern.

Once selected for IIT, I was grateful for a UP Police scholarship that helped ease the cost burden for my parents. While at IIT, I was drawn to topics that were esoteric and remote, perhaps echoing my yearning and unlikely journey up to that point. I did my senior thesis on the designs of artificial islands, which, at the time, was quite an outlandish topic. Even though I had never seen an ocean in my real life, I was fascinated by its stochastic nature, and applied to the postgraduate programme in ocean engineering at the University of California, Berkeley. There I published research and developed software for simulation of large-scale floating offshore structures, which, back then, seemed like a futuristic concept.

Q/ How important have science and technology been to you in your professional life?

A/ After an MBA in finance from Wharton, much of my work as a management consultant has been in strategic planning and financial feasibility of new ventures. I still continue to examine scientific and technological advancements, but with a view to assessing their competitive and economic viability. When there is an opportunity to help shape a concept or technology into a new startup, it is really exciting for me as an entrepreneur to work hard at the ground level—to shape the business model and to find a feasible path to bring it to market.

Q/ What about your experience with movies?

A/ During my job as a management consultant in the media/entertainment strategy group of PricewaterhouseCoopers in Los Angeles, I had worked for top executives of Hollywood studios on their strategic plans and financial models. There I also learned to analyse the business and process of film finance and distribution. With that industry experience, I was fortunate to be able to help talented filmmakers produce some India-based films and documentaries that showcased uplifting positive images from the culture and history of India. These were fairly short projects and I soon returned to my main focus in management consulting.

Q/ Tell us about your work in robotics.

A/ My latest venture stems from my prior engineering work on marine structures at UC Berkeley. Our goal is to build robotic systems for ocean exploration and conservation. Traditional radio signals, such as GPS and Wi-Fi, do not travel in fluids, making it difficult to explore marine life or to inspect underwater equipment. Current options of piloted submarines or remote-operated vehicles are quite limited and expensive for wide-scale deployments. Therefore, we are developing innovative, low-cost autonomous swarm robotic solutions that will enable remote navigation and communication in deep waters for research and industry.

Q/ How and where did you meet your wife, Amelia?

A/ I met Amelia at Wharton, where we were both first-year MBA students. Soon, I got to know that her parents were teachers and that she also had to move with them to their various university appointments. Like me, she, too, had gone to nearly 10 schools before college. So we started off on the shared stories of being the new kid in town every year and then having to do well in each new school right away.

Q/ Your thoughts on being part of the Warren family?

A/ When I married the daughter of two college professors 20 years ago, we had an instant common bond in the value of education. Her parents grew up on the edges of middle class and had found higher education as their path forward in life. Even though I came from a totally different part of the world, I identified with their life story, and I think they identified with mine in some way.

My family is multicultural just like many, many families across America. We celebrate Diwali lights as well as Christmas lights. We are an American family and as much as I like to teach my kids about Hindu epics, I, too, have much to learn from our local church’s hymn books.

Q/ Do you think Warren will make the best president?

A/ Elizabeth Warren stands to fight for all Americans. She grew up in the heartland of this country and knows exactly what families go through every day. All her brothers were in the military and she knows their concerns and their hopes. She has also studied family economics at the highest levels and has worked for decades to advocate for policies to help protect middle-class families. She has fought for years against predatory banks that also twist the political arms to their whims and thereby hurt all Americans, and in particular people of colour. She envisioned and built the consumer financial protection bureau against the onslaught of corporate lobbyists.

She can fight, and frankly it looks to me that she is the one actually enjoying this fight. Being part of a multicultural family, she has respect for the global communities and the need for thoughtful moderation and respect in our dialogue with all nations.

Q/ What would you and Amelia want to tell Indian-origin voters about Warren as president?

A/ For the Indian/south Asian community in the US, it may be a delight to hear that Elizabeth Warren has a close family connection with India. She has been to India multiple times to participate in our family functions. All three of her grandchildren have this dual heritage. The key for the Indian American community is to not get taken in by the easy pandering or divisive rhetoric coming from partisan voices. The extreme wings in the US do not have best interests of this community at heart despite their opportunistic and selective sloganeering during elections. 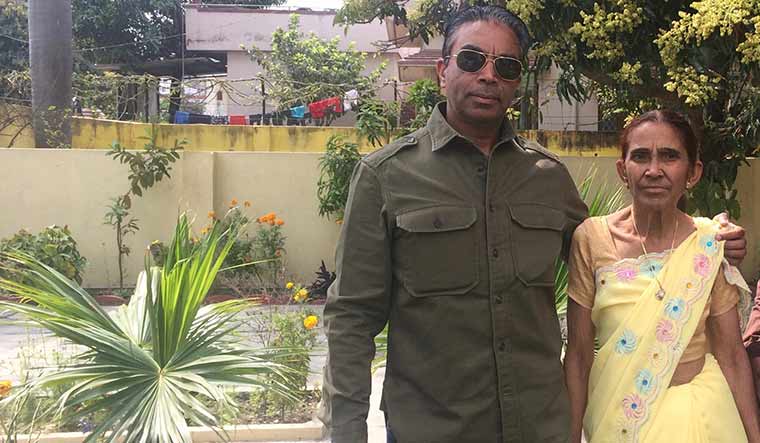 A/ First and foremost, Elizabeth Warren is an amazing grandmother, ‘Gammy’ to the kids. She is the only one who knows how to operate the little sewing machine and whenever she visits us, the kids put all their new clothes out that need to be hemmed or new buttons to be sewed. My daughters like to craft the emoji avatars for their Gammy’s Snapchat and giggle together. And then Gammy gets up and takes serious calls from the senators, teachers and her team. On any given day, she can move through many states in multiple town meetings and after a two-hour rally, she still has energy to stand for four more hours to meet thousands. She will then come over to hang with the grandkids and discuss their homework while heating up some leftover snacks for them.

Q/ Your thoughts on the American dream and the future of the US?

A/ The United States is a unique and great country, and it is made from multicultural families in each generation. Each new culture and new generation has had its challenges but eventually the country embraces them all. My daughters are growing up with a grandmother from a village in India, who cannot even read. Their other grandmother is a Harvard law professor and a US senator and a presidential contender. However, to my daughters, they are both similar in their hardscrabble upbringing, in their love for the grandchildren and in their focus on the family above all.

*also referred to as Khatoli village, in Saharanpur district

Lavina Melwani is a New York-based journalist who blogs at Lassi with Lavina.