President Bolsonaro assumes office, promising to take Brazil to its conservative past 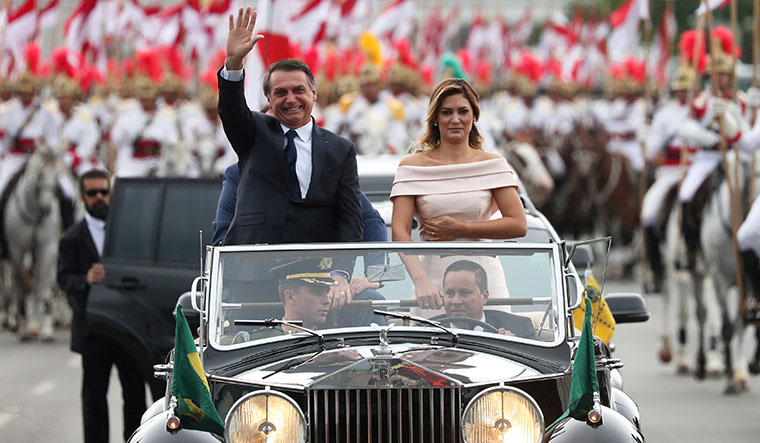 Right-wing's man: bolsonaro waves to supporters before his swearing in | Reuters

WHEN CARDINAL JORGE Mario Bergoglio from Argentina was elevated as Pope Francis six years ago, an Argentine journalist approached Brazilian president Dilma Rousseff for her comments. “The pope might be Argentine, but God is Brazilian,” said Rousseff. With Jair Messias Bolsonaro taking over as president of Brazil on January 1, it seems God has sent his messenger to the country. Bolsonaro, a far right populist, has promised to take Brazil back to the “Jewish-Christian tradition” and place “God above all”. As part of his victory celebrations, Bolsonaro attended a service conducted by the celebrity evangelical pastor Silas Malafia, who declared that God would change the fortune of Brazilians. “Brazil belongs to Lord Jesus,” said Malafia.

Bolsonaro has surrounded himself with a team that shares his core beliefs. Ernesto Araujo, the new foreign minister, wrote in an article after his nomination that God was back in Brazil. “[Former British prime minister] Tony Blair’s spokesman Alastair Campbell famously said of Britain, 'We don’t do God.' Well, in Brazil, now we do,” wrote Araujo. He said his goal was to help Brazil and the world liberate themselves from the globalist ideology, which he felt was anti-Christian and anti-human. He said the ultimate aim of globalisation was to break the link between God and man.

The words of Araujo and Bolsonaro should have been music to the pope's ears. But, they are not. The number of Catholics is dwindling fast in Brazil, the world's largest Catholic country. They now constitute less than 70 per cent of the population as more and more Catholics are drawn to evangelical sects, attracted by prosperity theology. The prosperity theology teaches that God rewards faith with financial blessings.

In return for the divine help, followers of evangelical sects have to contribute a part of their income to the church. It has made many pastors multimillionaires. Edir Macedo, the biggest of them all, is a billionaire, with his own private jet. His Universal Church of the Kingdom of God has over five million members and 13,000 temples across Brazil, as well as presence in several other countries, including the United States. Macedo's church owns the second-largest television station in Brazil and runs newspapers and radio stations in 27 states. Macedo was accused of money laundering and other illegal activities for which he spent a few days in jail.

The evangelical churches are politically active and advise their members to vote for evangelicals and their sympathisers under the slogan “brother votes for brother”. The biblical caucus in the Brazilian parliament is proactive on issues such as abortion and same-sex marriage. Bolsonaro himself has said that he would prefer his son to be dead than be homosexual.

Bolsonaro identifies himself as Catholic, although he has been attending a Baptist church for the past ten years. His wife and son are Baptists. In May 2016, Bolsonaro was baptised in the Jordan river by Pastor Everaldo, a prominent leader of the Assemblies of God church. Bolsonaro came back from the trip full of praise for Israel’s military prowess and achievements. Israeli Prime Minister Benjamin Netanyahu was present at Bolsonaro's inauguration. 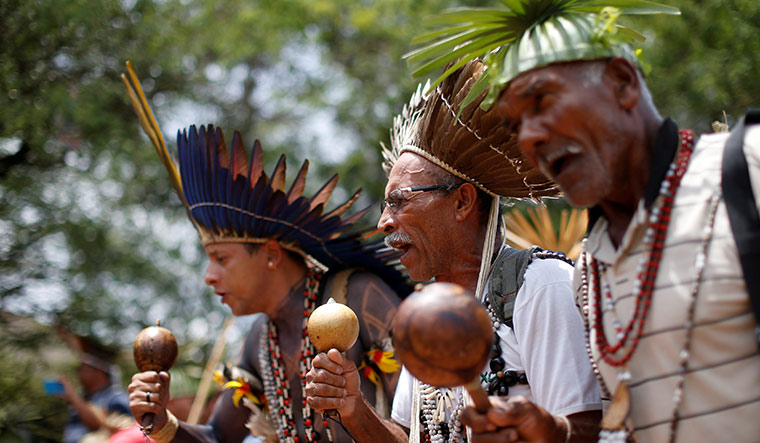 Real concern: indigenous people from various tribes wait to give a petition to Bolsonaro | Reuters

Along with the bible, bullets form another key element of Bolsonaro's politics. “Good citizens deserve the means to defend themselves through gun ownership,” said Bolsonaro at the inaugural speech. His supporters in the parliament responded by pointing their fingers in the shape of a gun. Bolsonaro has inducted seven former military officers into his 22-member cabinet, and a retired general is his vice president. He has plans to further strengthen the armed forces, although Brazil does not face any external threat. Brazil, which shares borders with ten countries, has no territorial disputes and has never faced any aggression from its neighbours. Most of the wars waged by the Brazilian armed forces were against their own citizens. Bolsonaro, however, is proud of the criminal military dictatorships of the past and his only complaint is that not enough people were killed. He now plans to give extra powers to the police to kill. His son, Carlos, who is also his social media manager, circulates video clips that praise police shootings.

Bolsonaro was part of the bullet caucus in the parliament, which lobbied for easy access to guns and privatisation of prisons. The caucus members are mostly former police and military officials, who received major campaign contributions from the Brazilian handgun manufacturing giant Taurus and the Brazilian Cartridge Company, the country's largest ammunition manufacturer. Not surprisingly, the price of Taurus shares has almost doubled after Bolsonaro's victory.

Bolsonaro and his supporters do not believe in climate change. Araujo once said climate change was part of a plot by “cultural Marxists” to stifle western economies and promote China's growth. He said climate science was a dogma which was used to justify increasing regulatory powers of states and the power of international institutions over nation states. Bolsonaro, Araujo and the rest of the team are fervent admirers of US President Donald Trump.

The “God and the Gun” rule of Bolsonaro looks exactly like the “Sword and the Cross” rule of the Portuguese and the Spanish. The colonisers exterminated millions of indigenous people in South America, destroyed their faiths, and converted most of them to Catholicism. Bolsonaro has already launched an assault on the environment, especially the Amazon ecosystem, with an executive order transferring the regulation and creation of new indigenous reserves to the agriculture ministry, which is controlled by the bible, beef and bullet caucus in the parliament. The caucus consists of evangelicals, rich landlords, cattle and meat industry representatives as well as former members of the security forces. The move sparked outcry from indigenous groups, who said it threatened their reserves. The demarcation of the reserves had been controlled by the indigenous agency FUNAI, which was under the justice ministry. It will now be overseen by a new ministry of women, family and human rights, headed by an evangelical pastor. The new health minister, Luiz Henrique Mandetta, has called for spending cuts on health care for indigenous people.

Bolsonaro said in his inaugural speech that he would liberate Brazil from socialism and political correctness. His anti-affirmative action and racist views are a setback to the poor and marginalised black population that number over 80 million. Under the pro-poor policies of the socialist president Lula Inacio Lula da Silva, nearly 40 million people were lifted out of poverty. Bolsonaro, however, is of the view that welfare schemes make the poor lazy.

The new government has dismantled the labour ministry and redistributed its functions to the ministries of justice and public security, economy and citizenship. And, under the neoliberal Finance Minister Paulo Guedes, Brazil, which has one of the highest levels of income inequality in the world, could see further increase in the gap between the rich and the poor.

Bolsonaro has been given a clear mandate by the Brazilians who desperately wanted a change from the hubris and corruption of the politicians of the Workers Party and other establishment parties. The economy, which was in recession in the last two years, is already recovering and the business sector is bullish. The biggest challenge before the new president, however, will be to carry all Brazilians along with his vision of development.