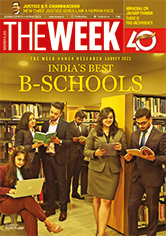 I am glad that b-schools are now looking to train managers who are crisis-ready and can look after multiple functions in their organisations; B-schools, after all, play a pivotal role in grooming the next generation of leaders (‘Moulded for the new world’, November 13).

The fast-changing business environment will demand more flexibility and adaptability. Let us hope the best management programmes are available in India, and let the best brains from across the world come and study here. I wish the very best to students who have joined b-schools this year.

Your cover story on India’s best b-schools was informative. I am happy that the face of business education in India is changing like never before. Business education curriculum should adjust to different market challenges, while also guiding students to be role models in society. There is no denying that b-schools shape the country’s future.

Your cover story will assist me in locating the best b-schools in the country. THE WEEK is committed to the right cause and is at the top of my reading list.

Judge with a difference

Justice D.Y. Chandrachud’s tenure as chief justice of India will be different from that of his predecessors, and, under him, we should expect landmark judgments (‘Robed in hope’, November 13). That he has a long term of two years will also help Chandrachud.

Chandrachud won admirers largely due to his ability to differ from the established ways of working. I was not aware that law students and interns come to Chandrachud’s court to hear him. Known for his astute judgements and dissenting opinions, Chandrachud has not shied away from criticising the government. He has always given importance to the common man’s rights.

There are a lot of expectations from Chandrachud. I agree with Justice Govind Mathur that Chandrachud employed modern thoughts and technical solutions as and when it was required. He will have a major impact on the functioning of the Supreme Court.

Your special report covering the ascendancy of Chandrachud, from a lawyer to the chief justice, was incisive, exhaustive and informative. We are fortunate that Chandrachud, known as the judge who bequeaths a human face to law, is not afraid of dissent.

With a brilliant legal mind, he will uphold the tenets of the Constitution.

Arvind Kejriwal has become an opportunist and is no less than a stuntman (‘Powerdrive’, November 13). Otherwise, how should we assess his demand of printing images of Ganesha and Lakshmi on currency notes? It goes on to prove that Kejriwal would go to any extent to win votes in elections. He is a few notches higher than Prime Minister Narendra Modi on such matters.

Kejriwal has made a fool of himself by requesting the Central government to include the photos of Lakshmi and Ganesha on currency notes. Kejriwal’s hypocrisy is on show. Earlier I refused to believe that the AAP is the b-team of the BJP, but not any longer. He lacks wisdom, and is not straightforward.

Every person needs some privacy and celebrities like Virat Kohli, rightfully, need a little more than that (‘Detour’, November 13).

Let Kohli play his game. And let us enjoy his game.

Shashi Tharoor made a valid point in his column (‘Last word’, November 13). But I feel there is nothing wrong if leaders have autocratic tendencies in them. The country is stronger and powerful when autocrats are at the helm, and decisions are taken faster.

Modi is getting elected again and again because people love him and want him as prime minister. The majority in the country have given him the mandate to rule and bring in bold changes. I pity the opposition leaders who call Modi autocrat, only because they cannot fight him and defeat him.

Your report (‘High and lows’, November 6) on soldiers guarding the Line of Actual Control is a stark reminder of the extreme conditions that our soldiers face on a daily basis. The monotonous and isolated life, coupled with boredom and the constant fear of a creeping enemy, takes a heavy toll on their psyche. The separation from family, and poor means of communication at far-flung posts, lead to loss of trust and sometimes failed marriages, due to the misunderstanding that crop up in such situations. A number of measures have been taken by the forces to tackle this issue, but more needs to be done.

It is the need of the hour to weed out the weaklings during the selection process. To be in the armed forces one has to be mentally strong, as only the toughest wins the war.

The ITBP, which was raised in 1962 to guard the Indo-Tibetan border, is facing physical and mental hardship. Every Indian should appreciate the ITBP’s dedicated service on this sensitive border. The officers and jawans of ITBP are roughing it out in tough terrain and harsh weather at high altitudes against an ever invasive enemy.