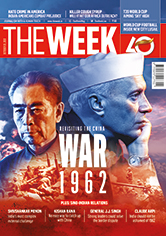 Our 1962 war with China needs to be told, and retold. A crucial lesson learnt was that we must not let our guard down. India, today, is not the India back then. We are one of the largest military powers on the planet.

Also, the Chinese will not dare to do what it did in 1962 (‘A tragedy of errors’, October 23). Any misadventure on the part of the Chinese will be dealt with severely. China should not seek to provoke India in any manner and settle disputes, if any, diplomatically. India lacked the required strength in 1962 and it miscalculated the Chinese side.

I was surprised as to why the Air Force was not used in the war of 1962. With better political management the war could have had a different ending. Jawaharlal Nehru was a learned man and a visionary statesman, but he was not a tough leader. It was easy for world leaders to fool him. I agree with General J.J. Singh (retd) that Tibet is China’s vulnerable underbelly. So, I suggest we should increase our engagement with Tibetans, and also consider a shift in our Taiwan policy.

Your cover story was extremely well written. The Army and the country were let down by both the political leaders and the army hierarchy in 1962. As a veteran and someone who commanded the IV Corps, I can say with confidence that we have come a long way from those unprofessional days.

What was the need to celebrate a war that we lost badly? THE WEEK should focus only on positive things. We were not ready for the 1962 war. It was forced upon us. Nehru completely misread the intention of the Chinese. There were so many faults in decision making back then, which led to the war. The good thing is we did not repeat those mistakes again. Even R&AW was created as a repercussion of the 1962 war.

Mulayam Singh Yadav looked simple, but he was a keen observer with deep understanding of politics (‘Powerdrive’, October 23). Yadav was also an able defence minister who took important decisions. The country needs more astute and able leaders like Yadav. It was knowledge to me that Yadav told journalists not to use the word ‘mutiny’ in context of the armed forces, which is followed till date.

Suryakumar Yadav is the best batsman we have in the country (‘SKY rockets!’, October 23). I find him a better batsman than Virat Kohli and Rohit Sharma. Age is not a factor in Yadav’s case. I am sure he will go on to play for another 10 years, at least. Yadav is not afraid of any bowler, much like how Virender Sehwag and Yuvraj Singh used to be.

What problem does Mani Shankar Aiyar have in Mohan Bhagwat reaching out to Muslims? (‘Manifesto’, October 23)

The good thing is the RSS is reaching out to minorities and putting an effort to bring them to the mainstream. I am sure Hindu fanatics may not like the stand taken by Bhagwat. Today, nobody other than Aiyar is interested in exposing hindutva hypocrisy.

Saris are an essential part of Indian culture, and it dates back to the Vedic period. It was first mentioned in the Rig Veda and there are so many varieties of saris in the country (‘Chic magnet’, October 23).

Sari is the only outfit that will never go out of style. Women look gorgeous in saris during festivals and marriages.

Edward T. Hall, an American anthropologist and cross-cultural researcher, said, “Culture hides more than what it reveals.” The same can be said about saris.

To say that wearing saris woven in different states makes Sonia Gandhi connected to the grassroots is a joke. If that is the case, then all politicians can wear clothes that are woven in a particular state, while they tour that state to seek votes for their party.

I cannot understand the joy that Namrata Zakaria had when she saw Sonia join her son Rahul Gandhi, briefly, in the Bharat Jodo Yatra. It is not uncommon in any part of the world to see family members walk together, be it father and daughter, or mother and son, or all of them together. Zakaria is out of place when she attempts to glorify Sonia with the types of saris she wears.

There is more to the saris than Sonia. And it takes more effort to stay close to the grassroots than by wearing saris.