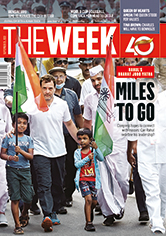 My respect for Rahul Gandhi has increased twofold after he embarked on the Kanyakumari-to-Kashmir Bharat Jodo Yatra. It is such a unique way of campaigning, and sending out a strong message to the people of the country. Rahul looks fit at 52 and is moving with leonine grace (‘Back to the people’, September 25). I am sure he will go on to win many more hearts.

The BJP leaders are worried at the moment. Can Narendra Modi or Amit Shah walk like Rahul through the length and breadth of the country? I doubt so. Modi may not be able to do that as the prime minister, but Shah, who is only six years elder to Rahul, should give it a shot.

I was wondering why Rahul’s coterie of friends did not think of such a plan in 2019. Better late than never.

Rahul’s Bharat Jodo Yatra is not only a self-purification process but also a grassroots level study of people’s lives. The yatra is not just about politics. Let more and more people join Rahul in his yatra.

Many BJP leaders are arrogant and feel the BJP will rule uninterrupted for the next 30 years. They are living in a fool’s paradise.

The yatra will definitely help in re-energising the Congress. Modi and company cannot afford to be complacent.

I appreciate THE WEEK’s comprehensive and impartial coverage of the Bharat Jodo Yatra. Rahul’s yatra has generated massive enthusiasm in the party, and this is commendable. The daily schedule of the yatra surprises me because Rahul gets plenty of time to interact with the party members and local leaders in each place.

She will be remembered

Queen Elizabeth II was well-known for her peaceful reign. She was the longest serving monarch of Britain. Her body will decompose, but the Queen will be remembered for her dignity and commitment by generations to come. May her soul rest in peace (‘Old-world charm’, September 25).

The Queen was popular in the UK and beyond. King Charles III is no match for the Queen. I doubt whether any member of the monarchy of the United Kingdom will remain at the helm for so long. Very few leaders and monarchs have the grace and charm that the Queen had.

Speak up for minorities

Dilip Ghosh said that Prime Minister Narendra Modi’s heart is as gorgeous and broad as the sky and he is grounded’ (‘Point blank’, September 25). But when atrocities are committed against minorities in different parts of the country, almost as a routine affair, Modi does not come forward to condemn them. He does not send a message to the nation that these acts are against our values. In most cases, the perpetrators do not get severe punishment and it results in the recurrence of such inhuman crimes.

I read Mani Shankar Aiyar’s Mani-festo (September 25) three times, as it was quite interesting. The facts about Netaji Subhas Chandra Bose were well narrated. I liked the way Aiyar compared Bose with Modi. I want to salute Aiyar for his rich knowledge.

I consider Mani-festo as the crown of THE WEEK. Aiyar articulates each word with precision and his columns are comprehensive. Today’s young people need Aiyar’s knowledge and wisdom.

I wish to disagree with Barkha Dutt (‘Last word’, September 25). She argued that India should leave the Commonwealth of which she has been a member since independence as it reminds one of colonial times. My view is that we should not make out a case for our prime minister who is otherwise keen on erasing anything and everything of the British era, right from renaming places with names of historical significance. And, if a section of eminent people come out in support of such a move, he might as well accept that viewpoint and quit the Commonwealth.

No other country in the world embraces extraordinary mixture of diverse religions and cultural practices the way India does (‘Harmony in diversity’, September 18). I was astounded by the collection of articles in your cover story—from Ganesh in a mosque, to Muslim cousins in Madhya Pradesh donating land for renovation of an abandoned temple.

Reading your cover story is going to be such a relief for people amidst the rising voices of extremists and religious fanatics. In reality, every religion seeks the same God in different ways. Religions are meant to unite humans, and not divide them.

I wonder why other news publications are not giving the same coverage for religious harmony like THE WEEK is doing.

Your team has done a great job by presenting stories of interfaith worship from across the country. It is a truth that the common man in India lives in peaceful oneness.

I want to thank your team for such a good cover package.

I was mesmerised after reading your cover story. I did not know that Indians embrace each other’s religions in such a manner. It forces me to ask a perturbable question: Is my country wholly secular?