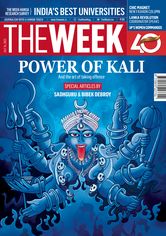 Thanks to the vitriolic tongues of our politicians, the level of discourse in India continues to slide. By criticising gods and certain religions, our elected representatives are not doing anything good; they have mastered the art of denouncing religions in the meanest possible terms (‘The art of taking offence’, July 24)

We need to be more careful the next time we choose our MPs or MLAs. Spewing venom in this manner should not be tolerated. We need to be vigilant and teach people with loose tongues a lesson or two in moral propriety.

Kali is worshipped by Hindus across the world. The controversy over the Kaali poster was created after filmmaker Leena Manimekalai showed a woman dressed as the goddess smoking, and MP Mahua Moitra reacted to the poster. This is unacceptable to the majority of Hindus. It has become a habit of sorts for artists, celebrities, intellectuals and others to portray the Hindu deities in a poor or negative form. Who can forget artist M.F. Hussain depicting Goddess Saraswati in the nude. Many such incidents have happened over the years. Jocular comments about Hindu deities by many celebrities have become so common.

People like Manimekalai want to gain overnight fame by hurting the religious sentiments of some people. This is an inhuman and uncultured way of portraying things in the name of artistic freedom. Laws of the land should be such that anyone found offending or playing with the sentiments of any religion should be punished heavily.

The way Manimekalai depicted Kali was despicable, and sheer madness. Who is she trying to convince by quoting the great Tamil poet Subramania Bharathiyar’s lines, ‘yaathumaagi nindrai’, which means Kali is there in all objects? It is an unpardonable sin to compare the legendary poet’s verses with the filmmaker’s abhorrent act. This is clearly an obnoxious attempt to propagate religious faithlessness.

I agree that Manimekalai had to struggle a lot to get approval for her documentary films. But she has hurt the sentiments of Hindus by projecting Kali in an uncivilised way. She ought to apologise to the nation. Controversy will not make anyone famous.

No matter how many awards Manimekalai is going to get by belittling Kali, I will not count her as a success story.

I was happy that THE WEEK brought out a reliable survey report on India’s best universities (‘Ready for the new’, July 24). I found it very helpful. Abhinav Singh’s opening article was enriching. The opinions of veterans in the field were the highlight of the package. Most of our universities have to foster a culture of research. In the recent years private players have contributed a lot to the country’s education sector. Yet, our top-notch universities are not listed in world university rankings. The National Education Policy has many hurdles in its implementation. Let us hope that the NEP will enable our universities to take a leap forward.

Rueful lamentations of Shashi Tharoor, expecting radical change in Indian polity, provided for a fascinating reading with a sense of self pity (‘Last Word’, July 24). Hope my people’s representatives read this article and learn a lesson or two. I hope they will make our country proud and prove Tharoor wrong.

To portray the best Indian woman cricketer on screen and live up to the expectations of the people must have been a challenging task, considering real and reel life are contrary to popular belief. Hats off to Taapsee Pannu (‘Becoming Mithali’, July 17). Nonetheless, after putting so much labour, time and dedication to come to terms with reality, it remains to be seen whether Shabaash Mithu connects well with the public.

What sets Mithali Raj apart is that she struggled and achieved remarkable feats at a time when women’s cricket was ebbing away and was lacking mass appeal. Her self belief, unflinching devotion to the game, consistency and confidence took her to unsurmountable heights and dismantled the shackles of geographical boundaries.

Raj’s remarkable journey of success was the result of years of struggle against patriarchy. It is her never-say-die attitude and her legacy that will continue to inspire budding youngsters.

I appreciate THE WEEK for keeping us informed, every other week, through the range of articles published. You are directly, or indirectly, helping so many. Here is a magazine that is energetic, powerful and inspirational. Let me sincerely congratulate everyone at THE WEEK.