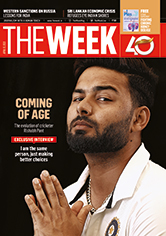 Rishabh Pant has certainly come of age and has matured; he is humble, unlike most cricketers today (‘He’s a keeper!’, April 10). I find an uncanny resemblance between Pant and Sachin Tendulkar—they are of the same built, and walk and talk in the same manner.

Pant is an important player in the Indian team today, and, at 24, he has a long way to go. I am sure he will play all formats for a long time to come.

Cricket, today, needs smart cricketers with a fabulous mind, and those who can come up with unconventional shots and techniques.

Your cover story on Pant made for an interesting read. He is at the start of his career and has miles to go. There are many talented cricketers today, but many of them just fade away. Two of the key requirements for a cricketer are good temperament and consistency.

Doing their best when required separates the men from the boys. Though Pant has shown the right temperament, it is early to judge him. His contemporaries—Ishan Kishan and Sanju Samson—are equally good and can easily fit into Pant’s gloves. But only time will tell if Pant is a worthy successor to M.S. Dhoni.

Pant stands tall among the high-quality newcomers. He is going to be sensation who will follow in the footsteps of Sunil Gavaskar, Kapil Dev and Tendulkar.

It is only fitting that THE WEEK chose to honour Pant with a comprehensive cover story and interview. At 24, Pant bats like a king, with gay abandon even against the finest bowlers in the world. Behind the stumps, he has improved a lot and plays with the highest level of precision. There is never a dull moment when Pant is in action, on either side of the stumps.

Pant’s utmost reverence to his father and coach speaks of his sobriety. His dedication was more explicit when he rushed back to join his team soon after attending his father’s funeral.

The upcoming batter-cum-wicket-keeper has a bright career ahead of him. THE WEEK has duly honoured the young cricketer with a good cover image and a detailed cover story.

Although I love cricket and have played the game in school and college, I am saddened and satiated by the relentless glorification of cricketers at the cost of deserving people.

The quote by Union Minister Nitin Gadkari that a resurgence of the Congress is essential in Indian political context is statesmanlike (‘Point blank’, April 10). Gadkari’s apprehension over a debilitated Congress giving way to smaller regional parties and creating a void is not unfounded.

A strong opposition is the soul of democracy. It keeps the ruling party updated with the mood, temper and aspirations at the ground level.

Regionalism is a threat to the unity of the country and it is unfortunate that regional parties are taking the place of the Congress.

Sri Lanka in the south, and Myanmar and Bangladesh in the east have always been the source of the refugee influx into India.

The considerate and humane approach towards entertaining refugees by India has invited troubles many times.

‘Mother of all sanctions, Madeline’ by R. Prasannan (‘PMO Beat’, April 10) was timely and informative. I want to thank Prasannan for his rich contributions in the magazine.

I have wondered what will happen if India goes into a full-fledged war with China or Pakistan; how will the west react; will these nations wage an economic war on us (‘Killing me softly’, April 10). It is a fact that our global integration is very high, and India cannot afford to be vulnerable by depending on certain countries for certain materials. The government should explore internationalising the rupee and should make the country and its citizens self-reliant.

I did not care about Kashmir Files until I saw the film (‘Bollywood is run by immature ones’, April 10). It is a must watch. To say that the Pandits had to suffer a lot in Jammu and Kashmir in the late 1980s and early 1990s is not an exaggeration.

Having said that, vote bank politics is what has hurt the nation always, and it is sad that the BJP is also engaging in vote-bank politics by using the Pandits as a vote bank. There was no need at all for the saffron party to promote the film. If it is a good film, it would have anyhow done well.

In the story ‘Aid, to our aid’ (April 3), Union [Commerce and Industry] Minister Piyush Goyal was wrongly mentioned as finance minister.

We regret the error.