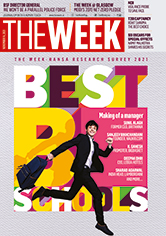 THE WEEK-Hansa research survey 2021 was quite insightful. I am glad that b-schools are aware of the shifts in the global business environment and have changed accordingly (‘Young and wise’, November 14). Fresh thinking in management education is the need of the hour.

I thought your story on educational loans was quite useful. A vast majority of students borrow for higher studies as they are unable to meet the cost. Banks have expanded their ambit and are funding courses that have industry demand. But the interest rate for educational loans is high; it should come down a bit.

I gather that the selection of the best b-schools was done on the basis of a scientific survey. This will prove quite helpful to parents and aspirants to choose b-schools of their choices.

I congratulate THE WEEK for coming up with such an informative package for b-school aspirants. It will help them a lot.

I must appreciate everyone at THE WEEK for the untiring work you have put in for the b-school package. To be frank, I was keen to know how many good b-schools are there in my home state.

I was moved by statements of some of the alumni of various top b-schools. I liked the mantra of P.C. Musthafa: ‘Make mistakes and learn from them’.

We need to recognise that by waging war against climate, we will be harming ourselves indirectly, since we are one of the species on the planet (‘The south remembers’, November 14). In the coming years we may witness the disappearance of several species. Let us act now before the situation becomes irreversible.

Climate justice is essential for climate equity. The issue has been delayed, but it should not be denied.

All wives should learn from Kranti Redkar and support their husbands when they go through a rough patch (‘Detour’, November 14). They should know their husbands inside out, and should lift them up physically and mentally.

If not for Mrs Wankhede, the allegations against Sameer Wankhede would have been even more. So many were speaking up for Wankhede, but nobody was openly supporting him in the manner that Mrs Wankhede did (‘Detour’, November 14).

By coming out in Sameer Wankhede’s defence, Kranti saved the day for him. But it seems she, herself, is not aware of the complete truth. Kranti, too, should await a fair probe in the case.

Rohit Sharma, Virat Kohli and K.L. Rahul are very good cricketers, but none of them take pride in playing for the country like how greats like Sachin Tendulkar, Rahul Dravid, Sourav Ganguly and Virender Sehwag did (‘Hit man to helm?’, November 14).

The Indian Premier League (IPL) has spoiled them all; it seems like they want to earn even more money. There is no stopping these cricketers from doing that, which is a shame.

Nobody should keep aside national loyalties for a franchise-based team. Sharma, Kohli, Rahul, Jasprit Bumrah and others should leave IPL for a few years and focus on their national career.

Shashi Tharoor has joined other Congress leaders in criticising the Central Vista project (‘Last word’, November 14). I do not understand why the Congress should have an issue on the new Central Vista, which has been envisioned with the future expansion of Parliament and increased activities of government.

Everyone knows well that the present Parliament is fast deteriorating and its maintenance cost is high. It may also pose safety issues. In fact, the UPA government was aware of these difficulties, but did not have a solution. If the Narendra Modi government has come up with a plan, all should welcome it, instead of criticising it.

Tharoor has deliberately mixed up several issues, while disapproving Central Vista scheme. The total cost of Central Vista is $20,000 crore and not $20 lakh crore, as mentioned by Tharoor.The buildings in Lutyens Delhi were built 100 years ago and are inadequate to cater to the needs of a large democracy like India.

Is a democratically elected government not entitled to upgrade the infrastructure required for a parliamentary system?

The budget for Central Vista in the year 2021-22 is less than $1,000 crore. How does this affect the fight against Covid, which India handled better than many advanced countries? Does building new infrastructure not help economy and employment?

I expect Tharoor to be convincing while criticising the Modi government.

I like reading ‘Letter from the Editor’. It is because the editor shares not only interesting stories, but also anecdotes with a certain ethos.

The issue dated November 14 was no different, as is evident from the concluding paragraph about the editor’s father and uncles who studied different subjects at different colleges. I wonder whether he was indirectly giving a clarion call to readers to revisit the golden days of joint families.