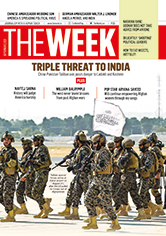 It was a timely cover story on Taliban’s return in Afghanistan (‘Alarming axis’, September 12).

India does not need to talk to Taliban, which assumed power through violence. The triple threat of Taliban, Pakistan and China can do no more than the proverbial ‘barking dogs seldom bite’, and it is tactically perfect that India is unwavering in its stance.

The wily Taliban would be constantly craving for India’s support as they know well that Pakistan and China could turn deceptive any time.

India should just stay a spectator when it comes to Afghanistan. Don’t forget our strategy on Sri Lanka. The R&AW trained LTTE, which backfired on us. Later, we sent the Indian Peace Keeping Force to fight the insurgents and earned a negative image.

We should strengthen our borders and protect ourselves.

Your cover story was a masterpiece. The adage ‘an enemy’s enemy is a friend’ is playing out. In Pakistan, hundreds of Shias have lost their lives in the Shia-Sunni sectarian animosity. But Pakistan is willing to forget it to help Iran build a rail line from Chabahar in Iran to Gwadar in Pakistan. This is to neutralise India’s advantage in helping Iran build a port at Chabahar.

When it comes to military strategies, there are no permanent enemies.

India had been invaded from the subcontinent’s northwest scores of times since the days of Alexander. India’s concern is no longer the revival of terror, but strategic and military.

Indications are there that all is not lost for India in Afghanistan. Currently Taliban has no capabilities. The possibility of an axis against India between Pakistan, Taliban and China is remote.

Afghanistan remains a graveyard of empires when we consider that no superpower, be it Great Britain, Russia or the US, was able to conquer it.

The cancerous growth of terrorism has to be nipped in the bud, which is possible only if countries shed their animosities and work together to counter the ultras.

China is suspected of playing a wicked role in the spread of Covid-19 (‘Uphold science, oppose political virus’, September 12).

Whatever they say, China has neither assisted other countries nor revealed to the World Health Organization how Covid-19 originated. Let us not forget that the virus was first identified in Wuhan in December 2019.

Weidong Sun, the Chinese ambassador, isn’t bothered about the havoc created by the virus but more concerned with the origins-tracing politics of the US. He asserts there is no need for investigating the origin of the virus.

The ambassador should understand clearly that Indians are free to draw their conclusions.

Sun’s column in THE WEEK will not obliterate the Chinese crime.

Attacking and blaming the US for its own misdeeds will take China nowhere. Its blunt attitude will in turn raise questions on its own denial. China says that a probe should be conducted by scientists and not politicians, but then politicians will report what scientists will say. China should stop blaming the US.

While launching the national monetisation pipeline (NMP), the government claims it is not selling any assets and the ownership will remain with it. And that only the usage part will be with the intending partners (‘Turning on the money tap’, September 12).

Putting the idle land parcels hitherto not generating any revenue into effective use is a better idea to garner resources for the government.

It is not clear whether the Railway Land Development Authority would co-exist during implementation of the NMP. There is a huge risk in parting with the immovable assets. NMP must take care of transfer or re-transfer of assets during and post lease completion.

Merkel is the best

The article on Angela Merkel made a good read (‘The wise chancellor’, September 5).

Merkel’s tenure will go down as the golden period of united Germany.

Her humanitarian gesture can be understood from the manner she supported refugees in Germany.

Your Independence Day Special cover story was a revelation of sorts (‘India, the uprising’, August 22). Many of your young readers would be reading about Attingal Revolt, the Sanyasi Rebellion and the Kakori train robbery for the first time, as these have not been really highlighted in history books.

I saw the picture of Indira Gandhi riding an elephant to reach the Bihar village where a massacre had taken place in 1977. It must have been extremely difficult for Indira to stay put on an elephant’s back like that.

UCC is a necessity

Deriding Uniform Civil Code by invoking religious motive is deplorable and an insult to our wise forefathers who wanted it, but were scuttled by persons with political motives. The UCC is a necessary for our nation (‘Schizo-nation’, August 22).

UCC, education and health care will aid in population control.