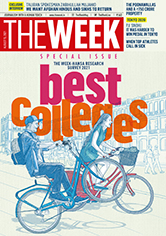 THE WEEK-Hansa best colleges cover story, apprising readers about good colleges in different streams, was really informative (‘Lessons learnt’, August 15). So many students who have completed their 12th standard are eager to seek admissions in good colleges. Your cover story will also be of help to parents, who can guide their children to the best college.

As a professor with over three decades of teaching experience, I can say that your best colleges special issue is something every parent and student would want to possess.

The meticulous, well-structured research methodology, taking into account perceptual and factual score, is highly commendable. It adds more credibility to the rankings.

Congrats to the entire team of THE WEEK for the great work.

Let me join your editor in wishing a better academic year for students.

Congratulations to the Indian contingent, which has brought the highest number of medals in Olympics till date, including the first gold medal in athletics (‘Booster shot’, August 15). However, as a country of 1.3 billion, we should not be complacent and aspire for a much better performance in future Olympics, with a target of 10 golds and a total of 30 medals in the 2028 Olympics.

We should start straightaway, by identifying potential winners from the remotest parts of the county, train them in world-class sports centres, which need to be established in each state. We should get international coaches, support families generously, get private sponsors and increase per capita expenditure on sports.

We should learn from the Chinese on how to encourage and motivate sports and players. We should divert part of the money earned by the BCCI into other sports.

The Taliban’s control over Afghanistan is now complete (‘Tightrope to Kabul’, August 15). Unlike the last time when the outfit asserted supremacy in the country, aided by gruesome atrocities all over, the present faction is talking of peace, though the main agenda is to bring change by force.

India’s reluctance to talk with a non-elected, gun-toting group underlines a fair policy, but diplomatically it offers countries like China and Pakistan a moral victory.

The heart of the matter is that the Taliban still expects Indian intervention, which needs to be done with extreme tact.

Taliban has resurfaced, and it is going to take Afghanistan back to what it was 100 years ago. I do not approve of those who say that India should talk to Taliban. No country should talk to gun-wielding nomads who are on the loose and behave like wild animals.

Stay away from Tamil Nadu

One thing that the BJP conveniently forgets while aspiring to become the ruling party in Tamil Nadu is that it is a state of Dravidian idols like Periyar, Annadurai, Karunanidhi, and, now, M.K. Stalin (‘Changing gear’, August 15). The BJP leaders are making a grave mistake if they think that they can attract Tamils with the hindutva agenda, and thereby gain a sizeable presence in the state.

Though Tamils are quite religious, they are not fanatics, and will never fall into the dangerous hindutva trap of the saffron party.

It was only because the BJP had aligned with the AIADMK in the 2021 elections that the party was able to get four seats. The ascendancy of the DMK, with its charismatic leader Stalin, has doubly sealed the chances of the BJP’s rise in Tamil Nadu.

Your cover story calls for immediate and serious attention (‘Law and behold’, August 8). It is highly deplorable that we still continue to have certain outdated provisions and laws that were left behind by the British, and the relevance of them in present-day India is undoubtedly questionable.

As promised during the 2014 elections, the BJP government repealed 1,200 obsolete and archaic laws, which are redundant. This is appreciable as this certainly disarmed certain people, who, for sheer publicity, filed complaints without substance or relevance. But, of late, sedition cases are causing a lot of concern among general public, and they evoke debates on whether such actions are appropriate and just.

THE WEEK has edified my knowing and thinking capacity because of coverage of different topics, especially the leisure part where I see so many things that electrify me.

You are doing an excellent job. I want to thank the editor and the team for all the benefits that I have received through your magazine.

In Power Point (Aug 22) Ola was wrongly mentioned as Oyo. We regret the error.