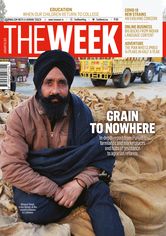 THE WEEK’s in-depth report from Punjab’s farmlands and hubs of opposition to agrarian reforms made for an emotional read. This government’s arrogance should end now.

It was a lapse on the part of the government to have not consulted with farmers’ representatives before the bills were passed in Parliament (‘Dread and defiance’, January 10).

Yes, agriculture has to be modernised. But it should be done in the manner that agriculturists want. The Centre should know that agriculture is a state subject, and it should have consulted all state governments before bulldozing these bills through.

Farmers cannot be left to die in this manner in the harsh winter. The Union government should listen to their demands and fulfil them at the earliest.

The government should continue with the agriculture produce marketing committees (APMCs), while suitably modifying the cooperative marketing society and giving bigger profits to farmers. Outsiders should be prohibited from entering such societies.

Your cover story represents the struggle of peasants who have sufficient grounds to demand for repeal of farm laws. Farmers are the backbone of society, and they provide us access to food. Haven’t they been suffering for too long? Let’s extend them a helping hand.

The new farm laws are discriminatory in nature and a direct attack on the peasantry. The government must be rapped on the knuckles for blocking the lucrative source of income of farmers. Who better than a farmer will know where and how to sell his produce.

The farmers are adamant on repealing the farm laws, and rightly so. The government must bow down to them.

It is really disturbing to see some farmers end their lives over farm bills. The government should not be heartless. What’s the big deal, after all, in repealing these laws? I am happy that the Supreme Court is intervening and is forming a committee to end the deadlock.

The government should withdraw the farm laws without any condition. Farmers should not be left to die.

Modi would go to any extent to please his corporate friends, but he seems less bothered about the plight of the protesting farmers.

Modi has said that he is ready to talk to farmers with folded hands, but he has not even once met them. This is quite strange.

It is wrong to say that the Modi government does not care much for farmers of the country. Even when the national lockdown was announced, farm workers and agriculture companies were exempted from it. It is a fact that the agricultural sector needs urgent reforms for sustainability.

The Union government is talking to farmers who are protesting, and I expect some solution soon. There are some vested interests who are trying to provoke farmers and politicise the whole issue. This should not happen.

The protest by a section of farmers is not justified. They should end it immediately, and solve their problems through talks, instead of demanding scrapping of the law, which actually benefits the whole farming community of the nation.

Ratan Tata is one of the most respected businessmen we have in our country (‘Detour’, January 10). After reading what Shobhaa De had to say, I realised that Tata has equal concern towards humans and animals. Today’s young businessmen should learn from Tata and emulate him. He is a man of principles and has good business ethics. I salute you, Tata.

It seems like for the past 50 years Life Insurance Corporation of India did not know actuarial science and population studies (‘The pandemic has amplified the need of life insurance’, January 10). India’s life expectancy rose from about 41 years, immediately after independence, to about 68 years in 2020. But this has not reflected in the premiums to be paid by the policy-holders. Huge profits are made, but they are not reinvested in the field of public health.

Mamata will fight it out

I do not think the BJP government at the Centre would do anything as foolish as imposing president’s rule in West Bengal, as that will backfire. Also, it would give uncalled-for sympathy to Mamata Banerjee (‘Baying for Bengal’, January 3).

There is no rule of law in West Bengal, and holding free and fair elections is going to be a challenge for the Election Commission. Nevertheless, the best thing to do now is to wait and watch.

I somewhat agree with Sougata Roy that there would not be a mass exodus from the Trinamool Congress. Mamata is a fighter, and she will not give up that easily. Her party will continue to do well, even if it doesn’t come back to power in the upcoming assembly elections.