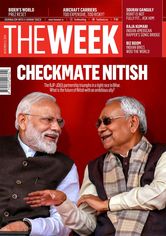 With the return of the NDA, people of Bihar have been spared of the proxy rule of an incarcerated person, whose guilt of corruption has been proved (‘New rules of the game’, November 22).

Although the NDA just scraped through, the political situation in Bihar was extremely favourable for it. An analysis of the voting pattern proves so. Blaming the EVMs and the Election Commission after losing has become an epidemic of sorts for the opposition parties, and this has to be condemned.

Chief Minister Nitish Kumar must be the most worried and depressed person today, as he is at the mercy of the BJP. It is a pity that Nitish, who was once considered a favourite to become the prime minister, stands diminished.

Nitish himself is to blame for the situation that he is in today. It was a wrong decision to align with the BJP without any forethought.

Anyone worth his salt would have firmly declined the chief minister’s post offered by the BJP, which might act smart and exhibit the big brother attitude, and irritate the already wounded Kumar and his party members.

The RJD would also try to take advantage of the situation and work out strategies to topple the government.

The results in Bihar have confirmed our worst fears. That the grand old party of Indian politics is imploding, and will soon face an existential crisis. As a nationalist, who admired the visions of Jawaharlal Nehru and Atal Bihari Vajpayee for a free, liberal, pluralistic India, I feel sad that the Congress is digging its own grave.

The epithets ‘Yuvraj’ and ‘Jungle Raj’ were bandied freely in the Bihar elections. Narendra Modi has never fought shy of lacing his election speeches with sarcasm and malice. In stark contrast, Tejashwi Yadav, who has taken over Lalu Prasad’s political legacy, preferred to concentrate on pressing issues concerning the state.

Although the media, in general, and poll surveys, in particular, went off the mark, the results in Bihar brought a close but decisive win for the NDA. The heroes are Tejashwi, the Election Commission and Modi.

The real takeaway, for me, is the rise of Tejashwi as a political leader who raised the level of electioneering, highlighting the genuine issues affecting the people, while steering clear of casteist and religious tantrums.

It is good that the Election Commission managed to conduct the elections smoothly during the pandemic.

THE WEEK’s coverage of the US elections has piqued my interest in the lives and activities of Indian-origin Americans occupying important political offices in the US (‘Vote of no confidence’, November 15). Apparently, access to political power is an open sesame to prosperity; however, with power, comes responsibility. Political leaders are accountable to their citizens and their country, and therefore cannot afford to turn complacent once elected to office.

How far elected leaders in the US will live up to the expectations, only time will reveal. All their activities, I am sure, will be on the radar of the press and the opposition.

Whether Kamala Harris will upend and metamorphose the existing race, colour and gender dynamics in the US and build a more equitable society will be closely watched by her compatriots and the world. Harris has been waxing eloquent about the rights of the marginalised and the vulnerable. The strength and enthusiasm in her voice are noticeable, but how far she will succeed in translating her motive into action, only time will tell.

The black Americans had recognised long ago that if they do not cast their vote, they simply do not exist. The high point of the elections has been that Americans, especially those marginalised and oppressed, have voted in large numbers to express their outrage against neglect and deprivation.

Yerramatti Raja Rao and his wife, Mangayamma, made history by becoming the oldest parents to twin girls, Rama and Uma, through in-vitro fertilisation (‘Raising hope’, November 15). Under normal circumstances, the twins would have been their great-granddaughters.

Rao and Mangayamma knew well what they wanted. They embarked upon a near impossible journey of parenthood against all the odds.

It was heartening to know that their daughters have today become the pride of the village. They are bound to have a great life ahead.

Mangayamma is a source of inspiration for so many childless women. Here, I must applaud Dr S. Uma Shankar of Ahalya Nursing Home in Guntur, who gave a new lease of life to the couple.

I was deeply moved by your report. Mangayamma’s dream was fulfilled by the grace of God. It is sad that Rao was not lucky to spend some years with his daughters.

Mangayamma’s mother, Tulasiamma, who is in ripe old age of 90, is God’s gift to Mangayamma. Tulasiamma is supporting her daughter by taking good care of her granddaughters.

One cannot help but wonder how these girls, in the absence of their mother and grandmother, would take care of themselves in a world that is increasingly getting unsafe.

As a tribute to all mothers, I have written a book, Life of Awesome Mothers. This book has 50 real stories of incredible mothers.