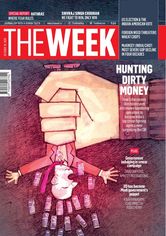 No doubt, warts and all, the Enforcement Directorate has become the nemesis of economic offenders of different hues (‘Right on the money’, October 18). Your cover story highlighted lesser-known details of the ED, and how it has outranked even the CBI, thanks to its inherent jurisdictional strength and functional outreach.

The advantage that a statement made by an accused before the ED is admissible before court makes it more dreadful in the eyes of the offenders.

The general perception is that the CBI, the NIA and the ED are all agencies used for political advantage by the ruling party at the Centre. Tell me, how many cases, which made headlines in the past 10 years, have led to conviction? Most of them have not progressed beyond investigation. What has happened to the Marans, Kanimozhis, Rajas, the Saradha case in West Bengal, the Indian Bank scam, Satyam Computers scandal, the Taj Corridor scam? The list is very long.

It is better that the BJP goes without a chief minister candidate for West Bengal (‘PM for CM’, October 18). If a CM candidate is declared in the state, Mamata Banerjee is sure to take advantage of it. Both Dilip Ghosh and Mukul Roy do not match against Banerjee’s strong image. It has to be someone else. Why not rope in Sourav Ganguly for the post?

I am amused and intrigued by the term “so-called liberals” that columnists like Meenakshi Lekhi liberally uses in her columns. I would like to be enlightened as to who she is referring to. Is it the political opposition, or all the non-votaries of “Hindutva or religious fundamentalism being enmeshed with politics and government”? Or, people who believe in advocating the separation of religion/religious institutions and the state. Is it morally reprehensible to be a liberal? Who is doing the calling in this case?

Lekhi’s columns read more like pro-forma propaganda bulletins issued by the political executive than objective analyses of trends and events.

In contrast, while he can be quite opinionated, Mani Shankar Aiyar’s columns are feisty, analytical and extremely readable.

The Hathras crime is probably the second worst after the 2012 Nirbhaya case, which shook the collective conscience of the country (‘Heartless in Hathras’, October 18). The most condemnable part of the Hathras crime was the manner in which the police cremated the victim’s body, without the permission of the family.

This, and several other incidents that have taken place during the last few years in Uttar Pradesh gives me the impression that there is something inherently wrong with the UP Police. Further, rape incidents in Uttar Pradesh are reported practically every day, even after the widely condemned incident in Hathras, which has been discussed extensively in the media and on other platforms.

Though the government of the day should take responsibility for all such incidents in the state, it has to be seen beyond politics, and all concerned persons should involve themselves in finding a lasting solution to these problems.

One can only hope that the country would not witness any more such atrocious cases.

I was flabbergasted to read about Sir Harold Evans’ journey (‘The Editor of all Times’, October 11). He was not only a crusader of human rights but also an amalgamation of a newspaperman, editor, writer, publisher and an investigative journalist.

It is delightful to know of Evans’ strong association with THE WEEK.

R. Prasannan’s column on Jaswant Singh was a fitting tribute to a squeaky clean politician who firmly believed in value-based politics, and was a rare commodity in the political firmament (‘A minister and a gentleman’, October 11). One of the founders of the BJP, Singh shared a great rapport with leaders like Atal Bihari Vajpayee and L.K. Advani. Vajpayee, as prime minister, entrusted Singh with core portfolios like finance, defence and external affairs, and Singh was never found wanting in discharging his duties. Perhaps, Singh’s most thankless job was escorting the three dreaded terrorists to Kandahar in exchange for the lives of hundreds of passengers on the hijacked IC-814.