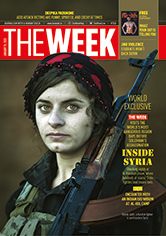 How can God be anything other than a manifestation of light?

JANUARY 6 marked the Feast of the Epiphany aka denaha perunaal, the ritual end of the Christmas season. In traditional homes, Christmas decorations—the star, especially—would have been taken down on that day. In western tradition, the day honours the three Magi and the star that guided them to the cowshed in Bethlehem. While the Magi themselves are variously called the three kings or the three wise men, a constant in the story is that they came from lands to the east of Israel. Every nativity set—from those by Kurt S. Adler to Lego—shows them in turbans and robes. So, many a Christmas story-teller will hint that the Magi journeyed westwards from India.

In grandmothers’ tales in Kerala, you will hear multiple variants of the Magi story, including one that says that they were great astrologers who cast a horoscope and then followed the celestial marker to the baby’s birthplace. Others will tell you that the Magi were not temporal kings, but learned men. Their wealth was their knowledge. And as the east has always venerated knowledge, it is a narrative that we gladly embrace.

Anyway, the Magi would have had a tough time if they were travelling today. If they were setting out from India, they would have had to pass through a tumultuous theatre—Pakistan, Iran, Iraq and into Syria or Saudi Arabia and then into Israel and Palestine. Or, they could have just taken the night flight to Tel Aviv.

COK-TLV is slightly over eight hours; tickets at around Rs50,000.

I am writing this letter to tell you about a trip that THE WEEK took to the region recently, a trip that harks back to an older and more trying time. Special Correspondent Lakshmi Subramanian and Deputy Photo Editor Bhanu Prakash Chandra had been trying for some time now to get into what used to be Islamic State territory in Syria, to visit the camps housing captured IS soldiers and widows. For a long time the project went nowhere and then when it did, it did so rapidly. It was a project with too many moving pieces, most of them out of our control. In addition to the physical risk that is to be expected while travelling in the area, the duo’s health, too, was put to the test. I commend their courage and perseverance to see the project through to the very end. The story of the journey itself, and the accounts of their visit to the camps, form this week’s cover story package.

By the accounts of inmates and administrators, THE WEEK’s journalists are the first Indian media professionals to visit the camps. In keeping with our slogan of Journalism with a Human Touch, what appealed to me most was the interaction with the Indian widow in the Al-Hol camp. She followed her husband on vacation, and how her life changed course! Her story and much more make this package a gripping read.

Let me conclude with some facts that link this conflict-seared region to India. Not many people know that Christianity reached India before it reached Europe. India, by some accounts, is home to the oldest Christian community outside Palestine; the community uses the Syrian rite of worship. It is also a fact that very little remains of that once vibrant community in that region. India’s Syrian Christians celebrate denaha perunaal with the El Payya hymn. God is light, it says. How can God be anything other than a manifestation of light?