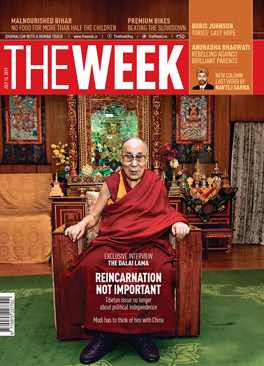 HIS HOLINESS the Dalai Lama turns into a child when he sees a beard. He cannot let luxuriant facial hair pass. He must tug at it. Must. There are numerous instances when he has done this, and on the receiving end have been rabbis, imams, monks and everyone from our own Baba Ramdev to English comedian Russell Brand. In Kerala, it was a cause for much laughter when the Dalai Lama reached for the beard of His Holiness Baselios Mar Thoma Paulose II, the Catholicos of the East. A widely circulated photograph showed them seated on a stage and in deep conversation, and the Dalai Lama playing with the metropolitan’s full, silver beard.

His playfulness and humour are often mistaken these days, when political correctness is the first rule. His comment in 2018 that refugees in Europe must be educated and encouraged to return to their homelands attracted a lot of heat. He later clarified that most immigrants, including the Tibetans, consider the country they left behind as home. So, when conditions improve, they should return to rebuild their homeland. Asylum is always a short-term solution.

When he appeared on MasterChef Australia in July 2011, the Dalai Lama quietly reminded everyone of who he actually was. Contestants on the show were given only two restrictions: vegetarian food, and it must come from the heart. The Dalai Lama ate everything put in front of him, but refused to rate the food. “Whatever I get I accept,” he said. “As a Buddhist monk it is not right to prefer this food or that food.”

Despite being a much sought-after speaker, he has stated clearly on his website that he does not accept speaking fees. This when everyone from new age gurus to former US presidents make a small fortune from the lecture circuit. The last big headline about Barack Obama was about him being paid $4,00,000 for one speech in 2017.

I had the honour of hosting the Dalai Lama at the International Press Institute’s World Congress in New Delhi in 2001. I found him to be warm and humorous, kind and humble. So, it gives me great pleasure that he chose to speak to Senior Special Correspondent Namrata Biji Ahuja on the 60th anniversary of his arrival in India. Interestingly, our last cover on him will turn 25, come this September. That interview was by Deputy Bureau Chief Vijaya Pushkarna, and he spoke about the growing appeal of Buddhism in the west.

Let me also take this opportunity to introduce our new columnist, Navtej Sarna. Some introductions are unnecessary, as in this case. But, do bear with me. An author, translator and former diplomat, Sarna was India’s ambassador to the US and Israel, and high commissioner to the Court of St James’s. He will be writing a monthly Last World column. Please join me in welcoming him into our pages.

Have the rains reached you, dear reader? The dark clouds are eluding me and my city. I am waiting for it. For dusk at high noon. For a million racing feet on my roof. For liquid silver to fall from the heavens. The only unpleasant part, perhaps, is the arrival of the mosquitos. Which brings me back to the Dalai Lama. “Do you think you are too small to make a difference?” he asks. “Try sleeping in a room with a single mosquito.”