Netflix's Wednesday offers a rollicking ride which might get derailed

The show is wholly dependent on the cynicism of its protagonist 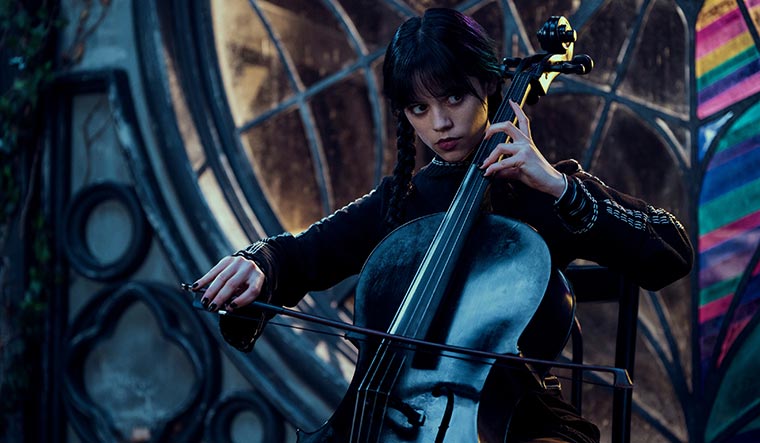 A still from Wednesday

Lonely, cynical geniuses like Sherlock Holmes, Sheldon Cooper and Dr Gregory House have become quite the thing in Western television. But they usually come tall, male and unhinged. A pig-tailed waif with the gutter talk of a mafia boss and a cold-bloodedness that would impress Hannibal Lecter is a novelty. Enter Wednesday, the teenaged daughter of Morticia and Gomez Addams of the famous―or infamous―Addams Family. Wednesday just gave evil an elite makeover. Some might say she is the Devil’s own highly entertaining spawn.

Strictly speaking, Wednesday did not initially have much of a presence in the Addams Family. In Charles Addams’ original New Yorker cartoons of the family, Wednesday was the silent and harmlessly sullen daughter of her vibrant and lethally cheerful mother. It was with the 1960s television version of The Addams Family that Wednesday started coming into her own. Prime-time television lapped up the girl who had the whiplash of a tongue. She was the best thing to happen to America since sliced bread and Marlon Brando. Although one of her withering comebacks would be enough to mortally wound Brando.

Cut to 2022, and the Wednesday of Tim Burton (yes, the same lonely and cynical genius behind Sleepy Hollow and Edward Scissorhands) has lost none of her sassiness. Burton is the executive producer of Wednesday, the horror-thriller named after television’s most beloved goth goddess, and has directed four of the eight episodes. Goodness, after all, can have only one predictable ending. Superman saves the world. End of story. Badness is redolent with possibilities. Not to mention punchlines, which are Wednesday’s specialty. Her take on social media (“I find social media to be a soul-sucking void of meaningless affirmation”); the French philosopher Jean-Paul Sartre (“Sartre said, ‘Hell is other people.’ He was my first crush”); and her classmates’ botched attempt to kidnap her (“It’s amateurs like you who give kidnapping a bad name”) is gallows humour at its best.

Good girls go to heaven. Bad girls go everywhere else. In Wednesday’s case, it is Nevermore Academy, the school for outcasts in a place ironically named Jericho. It is where her parents met and fell in love, and where she has been exiled for flinging piranhas into a swimming pool full of the bullies who tortured her brother. She does not expect to stay there for long, but an encounter with a dead ancestor, increasingly morbid psychic visions, an unsolved murder mystery, a serial killer on the loose and a bloodthirsty monster is just about enough gore to keep her mildly entertained.

The show does offer a rollicking ride, but there are times you fear it might get derailed any minute. Like when it takes a stab at resurrecting the dead, which is more comical than credible. Resurrecting the dead is a tricky affair. Great fanfare, a lot of smoke and perhaps an earthquake or two are a must. Wednesday perfects the bark without the bite. Then there is the glorification of violence. Throwing piranhas into a pool is one thing, but being proud of it is another. Remorse is a dish best served warm. But getting warmth from Wednesday is like getting a Christmas card from Voldemort. Her stare is so arctic that it can stop global warming.

Jenna Ortega owns the role of Wednesday. It is her show through and through. And it is impossible to end this without mentioning the fabulous Catherine Zeta-Jones as Wednesday’s mother. She matches her daughter’s contempt, step by scornful step, with her own brand of oiliness. We wish we could hear more of her “Darrrrlinggggg”, purred to perfection. In short, America’s most dysfunctional family has made a seamless transition into the 21st century. Cheers to that.