The Crown review: Starting to feel like a soap opera 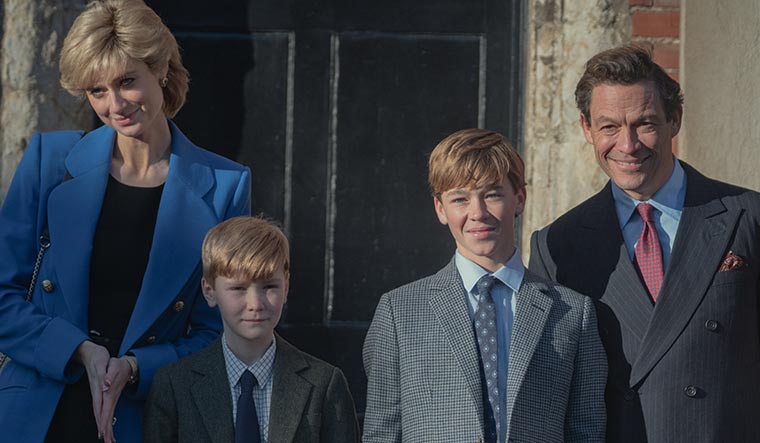 A still from The Crown 5

Have the royal jewels lost their shine? Well, yes and no. Season five of The Crown begins with a younger Queen Elizabeth II remembering her grandmother remarking how the monarchy answers not to the British public, but to God himself. “To give ordinary people an ideal to strive toward,” says Queen Mary. Elizabeth II at the time is seen inaugurating Britannia, the royal yacht.

Season five begins like its predecessors―a bit slow. As it catches on, one cannot help but wonder if the series has begun to lose its sheen. The saving grace is the acting prowess of Elizabeth Debicki as Diana and Dominic West as Prince Charles. Special mention needs to be made of Senan West, who plays a young Prince William worried about his mother. He showcases well the anxiety of a child whose parents are getting divorced.

The season sure has enough meat. With the Prince and Princess of Wales airing their dirty laundry in public, Diana’s famous revenge dress and a peek into the royal family’s connection to the Romanovs, there is just enough to keep the ball rolling. Otherwise, there is much airing of first-world problems. A poor prince trying to find a footing in the stifling family, an extra-marital affair, a woman gaslighting her daughter-in-law and a house on fire. Coupled with that there were the failed marriages of two more of the matriarch’s children, and it was indeed annus horribilis for Queen Elizabeth II. The season even features the infamous and explicit conversation between the now Queen Consort Camilla and King Charles III, where Camilla suggests that the king could come back as a box of tampax to be close to her. Then there is the questionably acquired interview of BBC’s Martin Bashir with the Princess of Wales.

Art and fashion-wise, one won’t be disappointed. Princess Diana’s outfits are a treat for sore eyes. From her understated skirt suits and neutral ensembles to the sexy black number and the memorable powder blue gown, costume designer Amy Roberts has done a thorough job of getting the fashion right. The cinematography, too, is great, having captured the highs and lows of the series quite skilfully. The music is suitably melancholic. While there is much attention to detail in the day-to-day lives of the royals, the series is now starting to feel like a soap opera. The editing certainly could have been crisper; there seems to be a certain lag in the plot line. In fact, one could go further down the road and ask what is the point of a fifth season? If ending it gracefully is what the makers aim at, then it would be wise to leave it here.