She got her first break in 2018, with an ad for Salman Khan's brand, Being Human 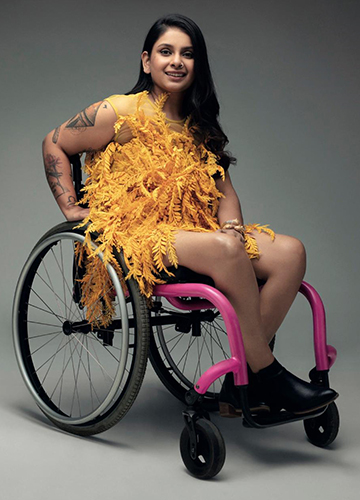 Virali Modi was declared dead for seven minutes. It all began when she caught malaria at the age of 14, when she was returning home to Pennsylvania in the US after a trip to Mumbai. The doctors prescribed paracetamol for her high fever and sent her home. The next day, she was not able to walk properly or urinate. She was rushed to the hospital where the doctors performed a lumbar puncture after an MRI revealed a shadow in the cervical region of her spine. As they tried to extract the fluid surrounding the spinal cord, she went into a seizure and threw up; half the vomit went into her lungs. She could not breathe and went into cardiac arrest. After being declared dead for seven minutes, she stayed in a coma for 20 days.

On September 21, 2006, the doctors told her parents that pulling the plug would be the best option, as there was not much hope of her waking up. Her mother requested that she be kept alive for another eight days as, on September 29, she would turn 15. The doctors agreed. After seeking permission from the dean of medicine, her family and friends threw her a birthday party. “As soon as the cake was cut, I opened my eyes,” says Modi, 31. “It was a miracle!”

However, she soon found that she was paralysed neck down. Although she tried to remain positive, her resolve flagged when friends started ostracising her for being a “vegetable”. “I attempted suicide twice after this,” she says. “After the second time, I was sitting on the floor of my room and crying when my mom walked in. She caressed me for a while. Then she asked, ‘Ho gaya tera natak?’ (‘Done with your drama?’) She gave me tough love.”

It was Modi’s mother who encouraged her to work on herself. A motivated Modi decided to take up an old and dusty dream of hers―modelling. It had been after watching Shah Rukh Khan’s Kuch Kuch Hota Hai (1998) that she had wanted to join the glamour industry. In 2014, Modi competed in the Miss Wheelchair India pageant, and was the first runner up. Afterwards though, she struggled to get assignments. After every audition, she was told, “You are pretty and talented, but you cannot walk, right?”

She got her first break in 2018, with an ad for Salman Khan’s brand, Being Human. “I had got an email about applying to model for the brand,” she says. “So I sent in some pictures. I got a call after two months with the news that I had been selected. I was ecstatic. I had not known that I would shoot the ad with Salman. There were hoardings of us at several places in Mumbai. Salman is very down-to-earth, professional and understanding. I had a wonderful experience.” 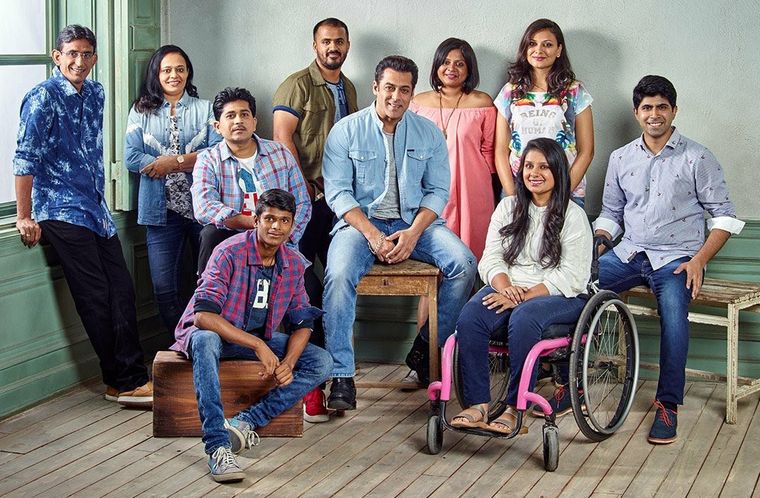 Virali and Salman Khan with other change makers at an ad campaign.

Her first project on the ramp was with the brand Ethnicity, later in 2018. She was a nervous wreck then. But she soon learned the art of projecting confidence, and assignments started pouring in―with Tailor and Circus, Nykaa, Earth Rhythm, KAY Beauty and WeWork, a workspace solutions company. She has also worked with brands like JPMorgan Chase, Unilever, Accenture, Bank of America and Bank of India. 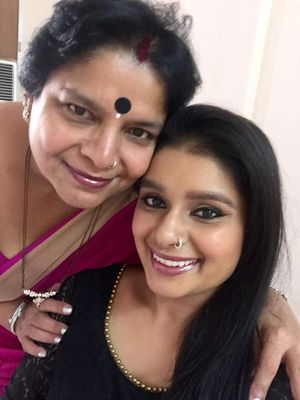 Love conquers: Virali with her mother.

“In 2016, we tested our products with our friends and colleagues who used wheelchairs,” says Abishek Elango, creative director, Tailor and Circus. “When we got an opportunity to work with someone so singular like Virali, we were thrilled. Not only was she able to validate the quality that was fundamental to us, but she also reaffirmed and renewed our commitment to being truly inclusive. We hope her work sets a precedent for people who have been marginalised in an ableist society....”

Modi says she has never faced much discrimination in terms of pay. These days, brands want to be inclusive, so it is a win-win. “My main aim [with modelling] was to create awareness around accessibility,” she says. “Disabled people do not want to be treated differently. They only need to do things differently. At the end of the day, we want the same things as others―to earn, be successful and happy, and do what we love doing.” She adds that despite most photographers and stylists not having worked with anyone with disability, they have been empathetic and accommodating of her needs. She finds it heartwarming that they are willing to help in whatever way possible. In fact, that is one of the things she loves best about modelling―that she is not treated any differently than other models and she gets to express herself the way she wants.

But outside fashion, life has not been easy for her. India is far from a disabled friendly country. In 2012, she shared her story about being molested by a porter at a railway station. “The timing was right as the disability rights act had just been passed, which mandated that ramps be made available and public transport made accessible to disabled persons,” she says. She posted an open letter on social media describing the incident in detail. She also wrote a letter to the PMO and the railway ministry. After receiving a lukewarm response, she started a campaign on social media with the hashtags #MyTrainToo, #RampMyRestaurant and #FlyWithDignity. The campaign went viral and soon, a railway official from Kerala reached out to her, asking for suggestions on how the railways could be made more accessible. “Renovations would not be possible as the central government would need to fund it and it could be a long- winded process,” she says. “So, we came to the conclusion that a ramp with wheels be made available. It would be portable and therefore easily accessible for those who needed it. Now, there are nine stations across the country that are disabled-friendly.”

It was for this feat that she was awarded the Women’s Achievement Award in 2017 by the Delhi Women’s Commission. She also made it to the BBC’s list of 100 most influential women that year. Modi then began her journey as a motivational speaker with a TEDx talk. As she said in her talk, “Today, I am able to do everything that you are able to do. The only difference is that, you take the steps, and I take the ramp.”