The play Shikaar preys on our notions of hunter and hunted

The witches in the play represent different things to different people 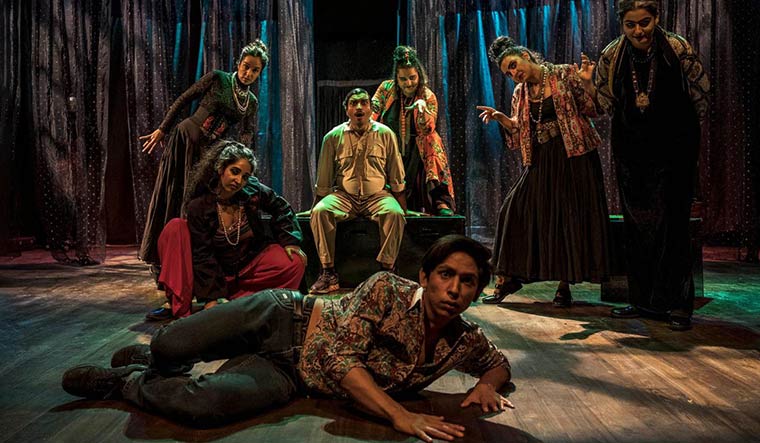 What are witches supposed to look like? It is a question five women in a remote Chudail Gharana (coven) want to know when a government official comes calling with the intention of purging their neighbourhood of witches. The upright official carries a manual from his office, which has enumerated their many recognisable features. He also knows a witchcraft de-addiction centre of sorts.

The women roll their eyes. They cringe, bicker, bark, hiss, fight and cackle as they go into a huddle to get rid of this pesky, persistent official. In one uproarious scene after another, Shikaar unfolds like an allegorical tale on themes we already know and experience—the machinations of the moral brigade, the culture of insinuation, gender and power play, the fear of assertive women. But it does so without missing a beat of exuberance and rollicking fun that Shikaar’s makers—Sheena Khalid and Puja Sarup of The Patchworks Ensemble—are known to inject in their productions.

The beauty and power of Shikaar, which first premiered in 2019 at Mumbai’s Prithvi Theatre, lies in the fact that it can be about so many deeper, uncomfortable things or just another romp by a group of wild, wayward women getting ready to feast on their prized hunt.

“It is not like the witches represent modern Indian women. We were very clear that we don’t have any specific message to give. Who are we to come on stage and tell audiences how they should be living their lives? The witches represent different things to different people. And that is how we like to keep it,” said Khalid, co-director of Shikaar with Sarup. The two thespians started The Patchworks Ensemble theatre company in 2014 and have gone on to create some of the liveliest, most entertaining plays on Indian stage in recent years, including the acclaimed Gentlemen’s Club aka Tape, on the many drag kings who perform in the underground club scene of Mumbai.

Shikaar is set in one of the oldest Chudail Gharanas on a very special evening when it’s the birthday of Dyana, one of the witches. Hence a shikaar (prey) is mandatory for a chudail (witch) and the rest of the family is getting ready to celebrate their lives of sisterhood and hunting-in-subterfuge. This hotly anticipated evening of fun is suddenly interrupted when the government official suddenly pops up with a strange mandate. Seeds of doubt, accusations, and misinformation are sowed as the witches end up going on a witch-hunt themselves.

Shikaar was the opening play of the ongoing India Habitat Centre Theatre Festival, which returned after a gap of two years in the capital. In Shikaar, whose story was conceptualised by author Shubhangi Swarup, each of the actors stand out for their own idiosyncrasies and foibles and sustain their defiance with pitch-perfect comic timing, especially Rytasha Rathore as the witch with an accent and a makeup company. “Our process of writing and creating the play is very complicated. But it is also very organic. So much of what you see, the actors are making it their own,” said Khalid, who trained in physical theatre at the London International School of Performing Arts (LISPA) “We want to try and get our actors to reach a certain state. A state of heightened performance where, while improvising, you become very alert and open. But not that state like maata chad gayee (spiritual possession),” said Khalid, laughing.