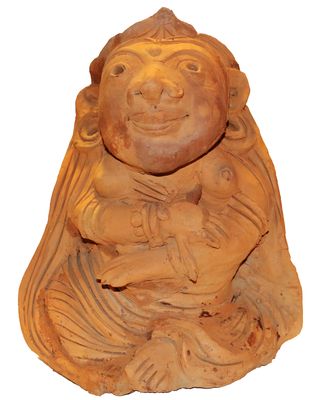 A terracotta work by Rajat Ghosh

The feminine and the feminist are two sides of the same coin in ‘Women and Deities’, an exhibition of 156 artworks, including 10 contemporary ones, currently on at the Bihar Museum. Whether it is the sculpture of a dancing girl belonging to the Mauryan period, or a 6th century stone work of a woman seated with a baby on her left thigh—they exude power and agency. The figurines, mostly in stone, terracotta and bronze, are mesmerising not just as artworks, but as representations of the times these women lived in. It is interesting to see the evolution of art through history, says Dr Alka Pande, renowned art historian and chief curator of the exhibition. The works on display are different and yet similar in many ways. “The difference begins with the material,” says Pande. “The terracotta works were done by hand, while those in bronze are more stylised. Contemporary works portray creative imagination. There is very little realism in those works.”

The museum, set up in 2015, has a rich collection of artefacts and paintings. A bewitching yakshi, believed to be around 2,300 years old, is one of the major attractions. Carved out of a single piece of sandstone, the sculpture was discovered at Didarganj in Patna in 1917. It was half buried in the mud on the banks of the river Ganga, and villagers were using its base as a washing stone. The artefacts span 4 lakh years of human history, says Anjani Kumar Singh, director general of the museum.

The exhibits of ‘Women and Deities’ bear testimony to the prominent space that women have always occupied in society. They did not just exist, they reigned. The exhibition will be on till October 7.