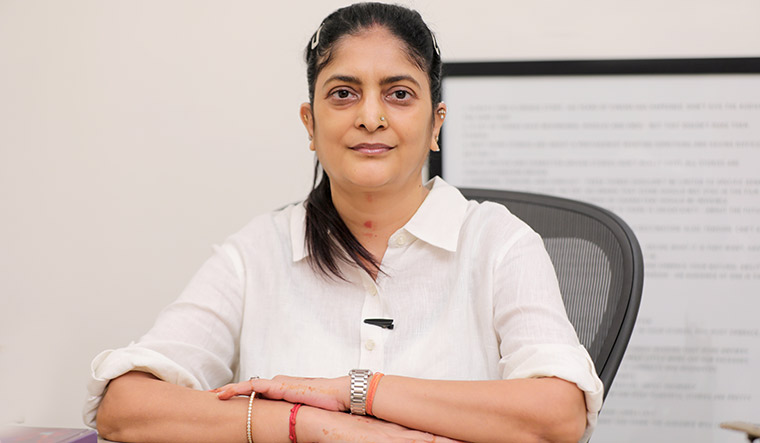 Only a woman can understand a woman’s pain. Whether this axiom is true or not, it was certainly the case with Sudha Kongara as she listened to Bhargavi, the wife of Air Deccan founder, Captain G.R. Gopinath, talk about how they lived without any earnings for over 10 years. “Bhargavi used to tell me about how she would prepare food even when there was nothing in the house,” says Kongara. “And how she ran the show even when life was so difficult.” What she took home was not Bhargavi’s words, but the emotion behind them, which she channelled powerfully into the character Bommi (Aparna Balamurali) in her film, Soorarai Pottru. Kongara gives almost as much importance to Bommi as Captain Gopinath’s character, Maara (Suriya). Their dynamics gives depth to the narrative and makes Soorarai Pottru one of the most emotionally rewarding offerings from Tamil cinema in recent times.

And now, Kongara is on seventh heaven with her film winning five national awards—for best feature film, best actor, best actress, best screenplay and best music director. “Namma Jaichittom, Maara” (We won, Maara), she captioned a photo on Instagram of her cutting a cake with the team.

In a way, Kongara’s journey was as challenging as Bhargavi’s. It took her 12 years as a filmmaker to reach where she has with Soorarai Pottru. Her career in the film industry began as an assistant director under Mani Ratnam for his films like Yuva (2004) and Ayitha Ezhuthu (2004). He did not just teach her filmmaking, but also the “importance of being focused and disciplined”, she tells THE WEEK. He would be there at the shooting site before the day’s work began and double-check each aspect of the logistics. “I learnt this perfection from him and that is what keeps me going,” says Kongara.

Even before she could finish her schedule with Ratnam for Ayitha Ezhuthu, Yuva and Guru (2007), Kongara decided to start out on her own with a sports film on the Women’s World Amateur Boxing Championships hosted by India in 2006. Her debut film, Drohi (2010), however, was on a different subject—about a man and his friend who betrays him. The film bombed at the box office. “Drohi was not that good and I know it very well,” says Kongara. “But I learnt how to do my homework before doing a film.”

Disheartened after the failure of her first film, Kongara would have gotten into organic farming or launched a restaurant if it was not for the encouragement of her friend, filmmaker Bejoy Nambiar. She decided to strike out again with her second film, Irudhi Suttru (2016), about a failed boxing coach who tries to vicariously fulfil his dreams through an amateur boxer whom he trains. After burning her fingers with Drohi, Kongara had learnt her lesson. For Irudhi Suttru, she did extensive research, meeting at least 20 female boxers who lived in Chennai. Speaking with them for many hours, she was surprised to learn that these women looked at boxing as a job and not a passion. When she asked one of them why this was so, the boxer replied that she would call it a passion if someone helped her put food on the table. Kongara filtered this disillusionment into the narrative of Irudhi Suttru, and it immediately touched a chord with the viewers. Suriya and Aparna Balamurali in Soorarai Pottru. Both won national awards for best actor and actress.

Whether it is the character Mathi in Irudhi Suttru or Bommi in Soorarai Pottru, Kongara invests her female characters with nuance and strength. She does not just lend them a voice, but she also brings alive the inner landscape of their lives. She gives them all the privileges of personhood. “It hurts my sensibilities when I see women portrayed as just add-ons,” she says.

One of the great things about Kongara is how she gets her actors to get into the skin of the character. For Soorarai Pottru, she had several long sessions with Captain Gopinath and ensured that Suriya read the book on him, Simply Fly, several times to make him emote the pain that Captain Gopinath underwent. “I told Suriya that he should not be like a star,” says Kongara. “He should be like the ordinary supervisor he used to be in a garment factory.” She also adopts a non-linear approach to the script which she learnt from her mentor, Ratnam, who employed it successfully in his films like Alai Payuthey (2000) and Ayitha Ezhuthu. So the film starts with the pre-climax scene and then travels back to Maara’s past, before cutting to the present. In certain stories, this approach helps to show multiple facets of a character, feels Kongara.

Ask her what she loves to do other than make films and she is quick to answer, “Cooking. I love cooking.” Even after a hard day of shooting, she will not forgo cooking her own dinner. Sometimes, she wakes up at 3am, finishes her chores and cooks before going to the shooting spot. “It is my stress-buster,” she says. So what’s cooking next for this master-chef movie maker? A film with Akshay Kumar, followed by one with Ajith and then, Suriya. She sure has her plate full.