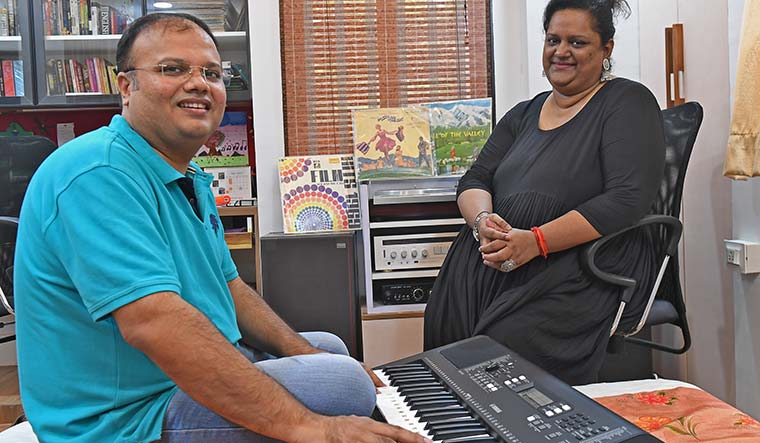 Ear for a bygone era: Kalpana Swamy and Kunal Desai, hosts of Nostalgiaana’s Jukebox that plays Hindi film songs from the 1980s and beyond | Amey Mansabdar

At 10:30pm on Tuesdays and Thursdays, retired bank employee Jamuna Iyer from Jabalpur, Madhya Pradesh, logs in to Nostalgiaana, an online community of music lovers. It is time for its popular show—Jukebox—wherein six select Hindi film songs from the 1980s onwards are played on loop for 30 minutes. Each song inspires a detailed discussion around its making and composition, the singers and lyricists involved, the raag and rhythms used along with lesser-known trivia.

When the title song from Yaadein (2001)—‘Yaadein Yaad Aati Hain’—was played in a session, show hosts Kalpana Swamy and Kunal Desai discussed how the song was the last recorded piece by well-known lyricist Anand Bakshi. A few keywords from the song—nagme, kisse, baatein, yaadien—even made it to the title of the biography written by his son Rakesh. Part of the tune from the original is the introductory score for Sakhi Saheli, a show on Vividh Bharti, even today.

Although there is no dearth of platforms for someone looking to tune in to soul-soothing music, what makes online musical clubs significant is the concept of “guided music appreciation sessions they offer”, says Swamy, a movie buff with a keen ear for “Hindi music, especially Bollywood”. Jukebox recently had its 50th episode, wherein participants could pick and play a song of their liking and present it within one minute, peppering it with anecdotes and trivia.

Desai, an IT consultant by day, and Swamy, a communications professional, picked Bollywood music post the 1980s for Jukebox because “popular perception so far has been critical of Hindi music of the 1980s plus years”. “People feel that Bollywood music became more rhythm-oriented by that time and was far removed from the kind of calming melodies that marked the preceding eras,” says Desai. The Mumbaikar duo prepares scripts over Excel sheets to break down the musical nuances for an audience that comprises people of all ages and from different geographies, tied together with a love for good music. “And once you know more about your favourite songs, the joy of listening to them increases manifold,” says Desai.

That shared joy of listening to good music is what brought Mumbai-based Shankar Iyer and Balaji Ramachandran from Chennai together to start Nostalgiaana two years ago. They would conduct offline shows pre-Covid, but the pandemic mandated that everything be shifted online. And that led to their initial shows in April and May 2020, which continue to this day. More than 250 members meet thrice a week online to listen to Hindi film music.

Members from diverse countries tune in to Jukebox for Rs290 for three months, while Iyer’s Retro Radio Revival (R4) comes at an annual fee of Rs2,500, which includes 12 monthly shows plus 12 repeat shows. The Nostalgiaana R4 team recently played ‘Tera Dil Kahan Hai’, from Chandni Chowk (1954) for filmmaker B.R. Chopra’s birth anniversary in April. “While music lovers are familiar with the variants of ‘Saagar Kinare’ from Saagar (1985) and enthusiastically [recall] the song’s predecessors like ‘Thandi Hawayein’ (Naujawan, 1951) and songs with similar progression like ‘Rahein Na Rahein Hum’ (Mamta, 1966), this lesser heard beauty from Chandni Chowk rarely gets a mention,” says Iyer. He shares an interesting trivia about the song: “Despite five lyricists in this B.R. Chopra film, information on the song’s lyricist is not available [anywhere].”

In its recently concluded monthly theme of non-film songs by popular Hindi film singers, the R4 team showcased a full-blown (2.5 minutes) song done for a Kolynos toothpaste commercial. The duet, sung by Manna Dey and Usha Mangeshkar in a swing rhythm, wowed Nostalgiaana patrons, given its total film song feel. The song features composer Babul and lyricist Akhtar Romani, who is known for songs like ‘Chale The Saath Milke’ and ‘Bekhudi Mein Sanam’ (Haseena Maan Jayegi, 1968).

The concept of coming together of like-minded people to enjoy good music online is not new. Earlier, these would happen on Yahoo Groups and Orkut communities, but the presence of a new platform, be it Facebook or Zoom, that provides the ease of coming together, with both audio and video options, makes it an enticing deal.

In Bengaluru, the RMIM Group (rec.music.indian.misc), an underground music lovers’ community formed in 1992 as an unmoderated Usenet newsgroup, is thriving today on Facebook and WhatsApp. Its members discuss and debate Hindi film music trivia from the 1940s and 1950s, both offline and online.

And, in Panaji, Atul Mishra and his wife, Lata—both retired nuclear scientists and former Bhabha Atomic Research Centre employees—conduct online tribute shows for Bollywood music directors of the “golden era” over Zoom. Atul sings, whistles and plays the guitar; Lata joins him for duets. Atul anchors the shows with tons of background trivia. He captures the theme of their shows in three words—RCB to RDB, that is R.C. Boral to R.D. Burman. “We choose the best 100 songs of great composers like S.D. Burman, Shankar-Jaikishan, Naushad and Madan Mohan and present them to our audience of around 80 participants every week,” says Atul. The show, which lasts for close to an hour, is broadcast live on social media; no more than 10 songs are played per session. At the moment, the couple is dedicating shows to music stalwart O.P. Nayyar and will follow it with Khayyam.

As numerous old Hindi Bollywood songs go on to be rehashed and remixed, the yearning to go back in time and listen to those timeless gems in their original form and discuss them with like-minded people is gaining traction like never before. And, for some like Renuka Arora, a marketing manager from Mumbai, these vintage music clubs are just a way to “feel relaxed and connected”.