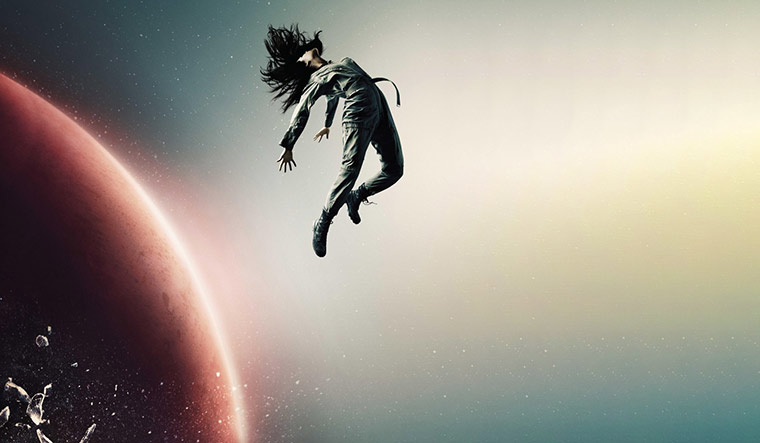 Watch this space: A poster of the Amazon show The Expanse.

Elon Musk of Tesla and Jeff Bezos of Amazon are capitalists, but both of them love the work of the Scottish anarcho-communist Iain M. Banks. An icon of science fiction who died in 2013, Banks wrote the Culture series—a dozen novels and stories centred on The Culture, a highly advanced space society living in artificial habitats across the Milky Way.

The Culture is a post-scarcity economy, which means goods are mass produced with minimal human effort and are available either very cheaply or free of cost. Human beings no longer have to labour, because artificial intelligence runs the civilisation. The Culture is the kind of utopia that Karl Marx dreamed of. Freed from work, human beings enjoy boundless freedoms to realise their potential.

“If you must know, I am a utopian anarchist of the kind best described by Iain Banks,” tweeted Musk in 2018. As homage, Musk has had his aerospace company SpaceX name its three droneships (custom-built ocean platforms where rockets land after they put spacecraft in orbit) as ‘Of Course I Still Love You’, ‘Just Read the Instructions’ and ‘A Shortfall of Gravitas’—all of which refer to sentient spaceships in the Culture series. For his part, Bezos has been trying to bankroll the adaptation of the first book in the series—Consider Phlebas (1987), a “huge personal favourite”—for Amazon Studios.

Banks, however, would have counted both moneybags as bad company. An avowed socialist who opposed union-busting capitalists like Musk and Bezos, Banks once cut up his UK passport and mailed it to 10 Downing Street after lawmakers failed to impeach prime minister Tony Blair after the 2003 Iraq invasion. He said he had first thought of “crashing my Land Rover through the gates of Fife dockyard”, but settled on the passport idea because it was less violent.

Surely, it is not Banks’s ideology that inspires Musk and Bezos; it is perhaps his singular vision of how life would be like after mankind takes to the stars. Both the men believe that mankind’s migration to space is just a matter of time. “We will run out of energy [on earth]. This is just arithmetic. It’s going to happen,” said Bezos in 2019, when he unveiled a moon lander made by Blue Origin, the spaceflight company he founded in 2000 after consulting the science-fiction writer Neal Stephenson. 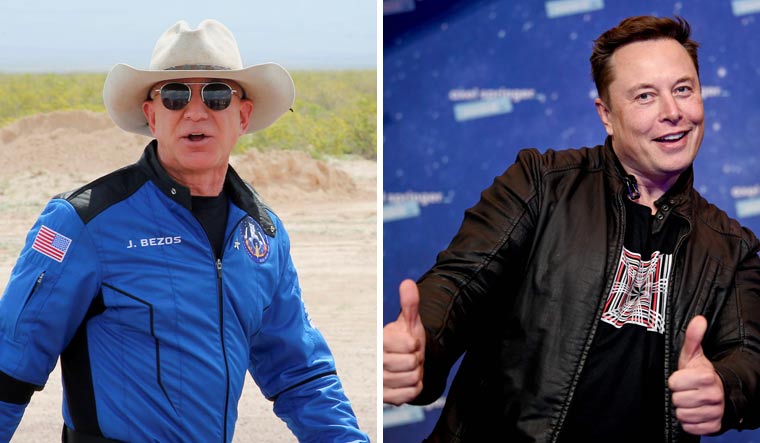 Jeff Bezos and Elon Musk believe that mankind's migration to space is just a matter of time | Reuters, AFP

Musk founded SpaceX in 2002. His guiding philosophy? “It’s pretty simple and mostly influenced by Douglas Adams and Isaac Asimov,” he tweeted in 2018. “Foundation series… [is] fundamental to the creation of SpaceX.” Adams is the author of The Hitchhikers Guide to the Galaxy and Asimov wrote the acclaimed Foundation series. In 2018, SpaceX rockets launched a Tesla Roadster carrying three Foundation books into space. Musk’s idea of paying a fun tribute, apparently.

Having got the wherewithal, Musk and Bezos have been putting science fiction to work. As Musk insists, they are “accumulating resources to help make life interplanetary and extend the light of consciousness to the stars”.

But they do have contrasting visions of mankind’s post-Earth future. Musk is focused on colonising Mars and establishing a super-efficient transportation system whereby settlers move around in giant capsules in underground vacuum tunnels as Banks imagined. With Hyperloop, Musk is already on it, and his first Mars flight carrying humans is set to be launched in 2026.

“He is what Asimov would have called a planetary chauvinist,” said aerospace engineer Rand Simberg. “He thinks people need to be on planets. He wants to be a multi-planet species. That's nice, I guess. But Bezos actually has a more expansive vision.”

Convinced that it would be near-impossible to find a planet as hospitable as earth, Bezos wants to build planet-sized orbiting space stations in the solar system, with weather like “Maui on its best days”. He will call them O’Neill Stations, after American physicist Gerard K. O’Neill, who first proposed workable space habitats for humans.

Bezos is no writer or artist who can clearly illustrate his space dreams, but glimpses of his rather expansive vision can be seen in The Expanse, a science-fiction series that Amazon Prime has been streaming since 2019. The Expanse is based on James S.A. Corey’s series of nine novels set 200 years into a future where mankind has colonised much of the solar system, and Mars and Earth have become economic and military rivals that come together only to exploit the “belters”—working-class population driven to survive in the underdeveloped asteroid belt. It is a world that mirrors our own, but with its own futuristic set of geopolitical, social, economic and cultural conflicts.

Even though The Expanse was critically acclaimed as one of the best science-fiction shows ever created, production was halted in 2018 after just three seasons. A crowdfunded revival campaign brought it to Bezos’s notice, who valiantly arranged for Amazon to take over production duties because he himself was a fan. “Jeff Bezos was getting emails from everyone from George R.R. Martin (Game of Thrones) to every captain of industry, like the founder of Craigslist, and they were all writing, saying, there is this show, it’s so great, you have to see it, you have to buy it and save it,” said Jennifer Salke, chief of Amazon Studios.

The Expanse is into the sixth and apparently final season now. The finale will be released on January 14. Like in the case of the Culture series, Bezos can be accused of not grasping the true depth of The Expanse as well, but no one can blame him for not being inspired by its sheer scale.

“The solar system can easily support a trillion humans,” said Bezos in 2019, the year he delivered a public speech unveiling Blue Origin’s space vision, and the year Amazon began producing The Expanse. “If we had a trillion humans, we would have a thousand Einsteins and a thousand Mozarts and, for all practical purposes, unlimited resources. That’s the world that I want my great-grandchildren’s great-grandchildren to live in.”