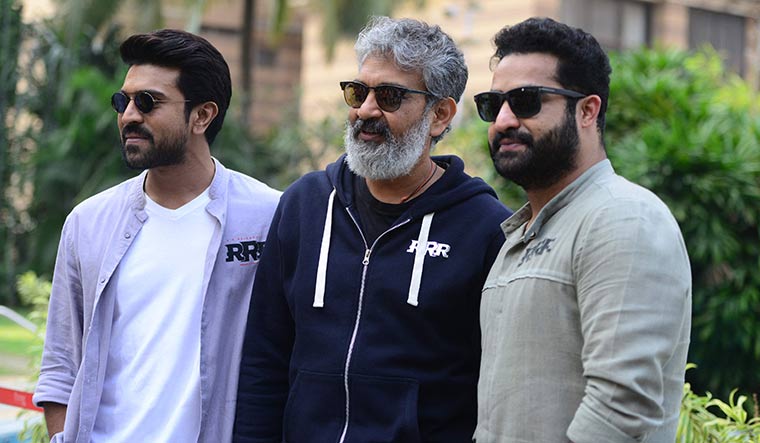 In an interview with THE WEEK, Rajamouli talks about what it takes to make his films universally appealing.

Q/ You have created RRR as an international film in scale and scope. It comes after your ultra-successful Baahubali series. How different will it be this time?

A/ In all my films, I predominantly depend on emotions. People liked Baahubali because of the emotional sequences between the characters; RRR will offer you something very similar. Or, I would say, much more hard-hitting emotions. Budget wise, it exceeds [Baahubali], not just because we spent more on sequences, but because the cost of production has increased multiple times between these three, four years. RRR will be a visual extravaganza. We are promoting it much more than Baahubali.

Q/ How do you get your actors to do what exactly you want them to do?

A/ The knack comes from the writing. When I develop a character, I will dwell upon it for a long time. I would repeatedly think about the details—how I would enhance the scene, what should be the background score in that scene—and I would start enjoying it as an audience. I would be playing out the sequence in the theatre in my mind.

I have good narration skills. So, when I narrate the scenes to my actors, I will take them into my mind-theatre and make them watch that scene along with me. I get them hooked onto the scene and the character in the narration stage itself. On the day of the shoot, it is just making them revisit.

Q/ How did the idea for RRR come up?

A/ I was impressed with the [2004 film] Motorcycle Diaries. At the end of the film, the director suddenly reveals that his protagonist is Che Guevara. Until that point in time, we just know him as Che—a common name. I thought that was brilliant.

We have so many freedom fighters; while writing their story, a similar pattern can be explored—that thought existed in my mind for quite some time, and suddenly I realised that [the stories of] freedom fighters Alluri Sitarama Raju and Komaram Bheem will make for an intriguing plot, as both have certain similarities.

In real life, they never met. But what if they meet now? What if they inspired each other to become what they eventually became in their life? I thought that was a brilliant, exciting, thrilling thought. And then everything fell in place from there.

Q/ Both Ram Charan and Jr NTR are big stars, and it must have been a challenge to give them equal on-screen space. How did you strike the balance?

A/ Yes, it was a huge challenge. But I was never worried about their star power. I was never worried about how many fight shots or close-ups each. If I approach it that way, the failure starts there. But the balancing is very important in terms of how the audience empathises with them. At the end of the film, the audience should feel equally emotionally attached to both the characters. That was very important to me. And, I was careful and precise in writing each scene.

Q/ Alia said she would love to become a household name in south India, too. You casting her in RRR might just be the break she needed.

A/ Hopefully, if it happens, I can take the credit and keep reminding her that I gave her the push. From the days of Baahubali itself, she used to say that she loves my work and wants to work with me. I saw Raazi and was blown away by her performance.

But just because we want to work with each other, we just cannot work together. There should be something of relevance, something that excites her or wants me to cast her. I needed someone who could balance both fire and water to play Sita’s character. This means that we were looking for someone soft and innocent but with a solid inner strength that could rein in two big powers. That was very exciting for me—that kind of characterisation.

Raazi was still in my mind, and when we were writing the character itself, we thought of asking Alia to play it.

Q/ You did not think about anyone from the south industries?

A/ No. Some names did come up, but we were excited about Alia.

Q/ What efforts did you put to ensure that RRR goes beyond the south?

A/ I released the trailer of the film (laughs). What I meant to say is that in the trailer, I tell the entire story of the film. And, I put all my efforts to tell the audience that this is the kind of film I am making. The trailer has to be universal, and it has to be appealing to a diverse range of audiences. That is why it is very important to put all efforts into making an exceptionally intriguing trailer. That is the reason why we have more trailer views in Hindi than in Telugu.

A/ So many aspects—especially the characterisation and the emotional bonding between the characters. The universal theme of friendship. I feel I could release my film even without dialogues, because most of [what the characters want to say] are communicated by the actors’ eyes.