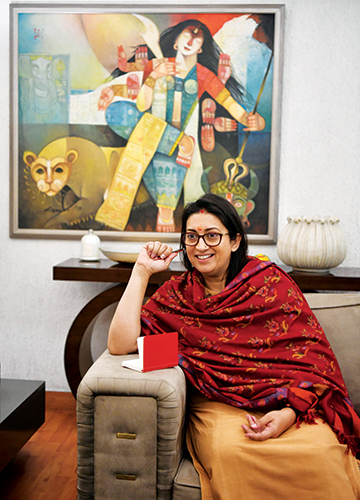 At home, Smriti Irani has plotted a thriller. A pug keeps a wary eye on the office of the Union minister for women and child development at 28, Tughlaq Crescent, New Delhi. Chloe, distinctly unimpressed with new entrants, is sunning herself on a day when the Delhi winter does not seem like a death sentence.

The driveway is dotted with green—date palms, fragrant parijat, a row of champa and sweet lime in full bloom. Sitting under a date palm is the last ring of security, Sheru—black as the nights in Himachal Pradesh, from where he was found on a road and rescued.

Irani’s debut novel, Lal Salaam, is out next week. It is 10:30am on a weekday and Irani, 15kg lighter—“Covid,” she offers as explanation—sits behind her favourite painting, Durga on a tiger. Every conceivable contemporary Indian master’s work—from Jamini Roy’s cat to Anjolie Ela Menon’s jewel—hang on her walls. As do a pantheon of gods that greet visitors at the entrance, with a fresh dot of marigold flower at the base of their portraits.

“I think life came full circle at a very young age. I was barely 36-37 when I became a cabinet minister,” she says. “I think there was a lot of reflection on the fact that there has been nothing that I have put my finger on that I have not managed to do. I was an audacious child. I remember my mother giving me a tight whack when I was around 10. Because, I was absolutely confident that I was going to be somebody. It was at a time when we were struggling financially. She looked at me and said, ‘Just look around you, what makes you say that you will.’ I just said, ‘Don’t worry, I will.’”

And she did. It is this self-assurance, with a little bit of defiance—often too easily mistaken as brash by her opponents—that has become Irani’s signature. Irani, 45, has proven, time and again, that she is a survivor. “I have had a political obituary written about me in 2016,” she says.

A natural storyteller, Irani shares the childhood anecdote within minutes of the interview, ensuring you are hooked and rooting for her. Irani, the politician, is sharp, articulate and combative; Irani, the writer, is disarmingly chatty, sharer of Delhi insider tips on where to find a bargain. Her extended family includes actors Boman Irani and John Abraham, and writer Anosh Irani.

One other politician who dared make the leap into fiction was former prime minister P.V. Narasimha Rao (not while he was in office). The Insider—complete with political treachery and steamy scenes—created more controversy than anything else. It was believed to be loosely modelled on Rao’s political career. There was a sequel, which was never published.

Irani’s is not a thinly disguised version of her life in politics. There will be a few characters that are easy to distinguish, but none of them politicians. Lal Salaam is an all-out thriller, very much in the Bollywood style. Vikram Pratap Singh, a young officer, is posted in the heart of Naxal land and is tasked with avenging the killing of 70 CRPF officers.

Written over two years, Irani’s slim book is a twisty page-turner. So much so that it kept her editor V.K. Karthika’s 80-year-old mother awake at night. “I write as the world sleeps,” says Irani. “The fact that I have insomnia helped.”

The book was born out of a TV debate in 2011—high-octane, emotional and, as always with Irani, immensely quotable. “I was so outraged,” she recalls. “One of the panellists said that security personnel know when they wear their uniforms that they are to die. I was furious. I said, ‘Imagine if somebody who loves them is watching us now. Can you imagine how thankless we seem?’ The fact that the rage sustained over a decade, speaks volumes of how I felt at that moment. I wanted to do it in a very fictional [style] and [with] many characters steeped in satire.”

Irani paints a vivid picture of the Naxal area, offering readers the complexity of the situation—not preachy, but with masala. It is clear who the heroes are, and the villains; but there are shades of grey. There is even a young, fiery, honest journalist.

This may be her first book, but it is not her last. There are two others in the pipeline, completely different from her first. The second is almost halfway done. The book found its way to publishing like everything with Irani, a little unusually. A frequent visitor to Khan Market and BahriSons—booksellers to politicians across the divide—Irani found herself an agent, Anuj Bahri, and the book an editor, Karthika, who has under her belt the last Indian writer to win the Booker Prize, Aravind Adiga. 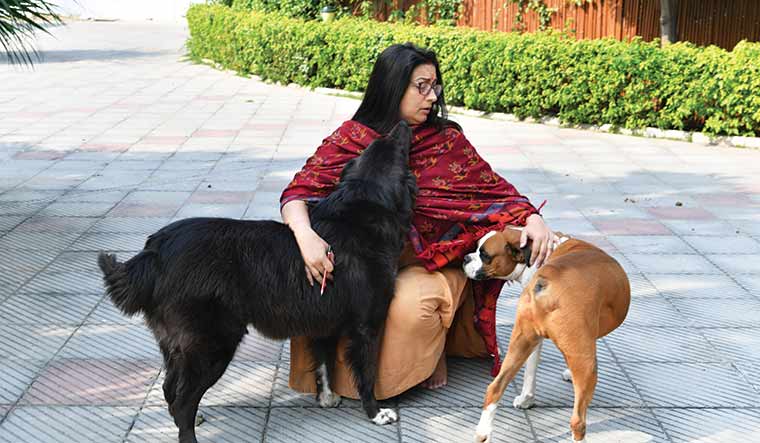 “I love my editor because she would not let a word by just because I am Smriti Irani,” she says. “We are ideologically poles apart. So, for us to come to a conclusion on a book is genuinely a sign of a healthy relationship between an author and editor.”

It is difficult to fit Irani into a stereotype—she always finds a way not to. A beauty contestant aspirant, Irani went on to become one of the biggest names in the television world, playing a traditional bahu in Kyunki Saas Bhi Kabhi Bahu Thi (2000). Tulsi—complete with a vermillion streak—became a phenomenon, an upholder of the Indian family values, and Irani, the highest paid actress.

Yet, it was Irani who chose to “trust Indian families” and took her on-screen son to jail when he raped a woman. It was a scene Irani wrote herself, tearing up what writers had worked on for seven days. “From I am going to die, it just turned around to Tulsi telling her son that there is nothing manly about [rape]; that it makes you a napunsak (impotent). Ekta literally choked,” she says, laughing. “But she let it fly. It became the highest-rated scene.”

As a politician, Irani keeps alive her Tulsi image—a mother of three, the dutiful wife who eats last—but she is not squeamish about ambition. “I don’t have any guilt as a mother,” she says. “I saw what guilt did to my mother—that your whole life is only [about] your relationships…. That I love my family is not disputed. That I do not have an empty nest syndrome is true. That I will not fall apart if everybody leaves is also true. That is just me.”

She ventured into politics very much as an outsider. Very much like her career in acting. Eighteen years later, with many firsts to her name from her career in television and politics, Irani is still very much a loner in politics. But that does not seem to bother her. She works 18 hours a day—a skill she learnt on the set.

She keeps to herself, does not have an entourage—something she is very proud of—grants very few interviews and guards her privacy fiercely. “I think most of the critique of my political being was very personal,” she says. “It was never about a policy decision. I think it is because I would not mollycoddle anyone. I am not somebody who has cultivated journalists.”

This was probably a piece of advice that she was given by Jaswant Singh that she ignored. In 2003, “Jaswant Singh, the legend” called her for a cup of tea. “He said, ‘I want you to understand that you need to be nice to a particular set of journalists for you to be covered well. You have potential, but you need that support,’” she recalls.

“I had that lovely cup of tea. I enjoyed the company of Jaswant Singh. Gawked at him. Asked him everything about geopolitics that I have ever wanted to ask him. And I said a stout no. He said, ‘You know you won’t survive.’ I said, ‘I will.’ I did it when I was in the media business. I did not have a PR agency. I did not have a manager. So, I said, ‘Don’t worry, I will manage in politics just fine.’”

Irani thrives on rising to the challenge, the more impossible the better. “It is one life. You live it,” she says. “You bear the consequences for it. So, the decision of how you want to lead it better be yours. I decided that when I was 17.” Each time her career was written off, she rose to fight another day. She has had the heaviest portfolios—human resource development, and information and broadcasting—where she pulled off a successful International Film Festival of India. While the two portfolios were dropped, the schemes she had initiated continued.

Irani, however, stayed on in the cabinet, with the textiles and the women and child development ministries. Though the textiles portfolio has been dropped, she still is a powerful voice.

But it has not been easy. Her first election was fought in Chandni Chowk in 2004, when she was still very much the favourite bahu. Irani gave it her all, but lost to Congress stalwart Kapil Sibal. In 2014, she was pitted against Rahul Gandhi in Amethi. She lost, but refused to forget. Her team—handpicked and available—worked hard. And, Irani transformed from the bahu to the didi of Amethi to finally become the giant-killer in 2019.

“I don’t have an entourage,” she says. “I don’t walk around with this whole bevy of cars or people. I still remember when I went to fight the Amethi elections, there was this youngster who said, ‘You know, didi, there is a problem with your politics. Aapke paas bhaukal nahi hai.’ I asked, ‘What do you mean by bhaukal (pageantry)?’ He said, ‘When you walk, you should have 50 cars behind you.’

“I said, ‘Can you imagine how reduced an individual I would be if I needed a bevy of cars to resonate with people as a politician.’ People don’t want representatives far removed from them. They want somebody who is empathetic, someone who is approachable.” Irani wants to be just that. It is clear whom the barb is meant for.

Irani’s power is people. Whether it is her audience or voter, she knows, she knows the pulse of the people and just the right pitch. It is no different with her book. 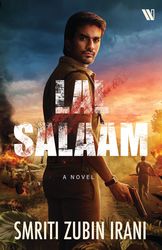