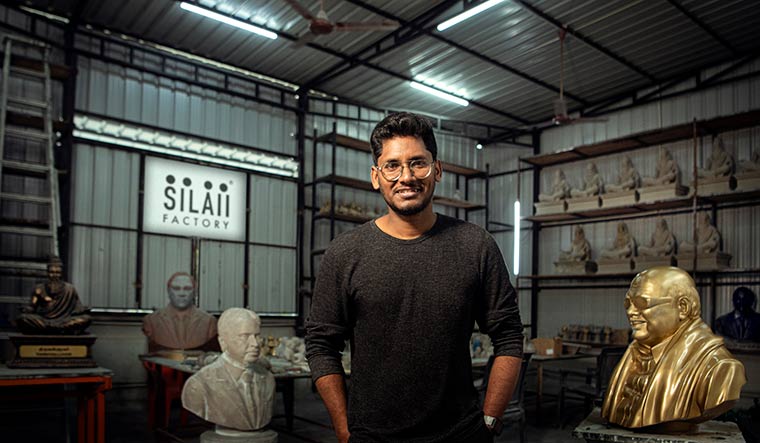 On August 2, President Ramnath Kovind, who was in Chennai for the centenary celebrations of the state assembly, was presented with a miniature model of the assembly building by Chief Minister M.K. Stalin. The moment was not just a matter of pride for Stalin or Kovind, but also for the crew of artists who created the stone sculpture. The model—two feet wide and 10 inches high—was a perfect miniature, capturing the building’s history and heritage.

It was just a week before the event that officials from the chief minister’s office had approached Arun Titan and his firm, Silaii. The six-kilo sculpture turned out to be a game changer for Titan. “Usually, it takes 40 to 45 days to create a sculpture like this. But we did this in seven days,” says Titan, a photographer and visual artist. Silaii has produced several likenesses of politicians and Dravidian icons such as Periyar, M. Karunanidhi, M.G. Ramachandran, J. Jayalalithaa, A.P.J. Abdul Kalam and B.R. Ambedkar.

Titan’s idea is to create a robust collectibles culture here, like in foreign countries, and make movie-specific merchandise. He wants to create sculptures that are rooted in culture, and offer a tactile experience and an emotional connect to society.

Silaii—an attempt to bring together Titan’s creative pursuits and entrepreneurial skills—was founded in 2019. Passionate about photography, Titan bought his first camera with his salary from his first job at the tech company, Zoho. He would walk 15km a day just to click photos. One day, he uploaded his pictures on a photo site, which got him international recognition. This paved the way for him to attend the Angkor photo festival in Cambodia, where he was the only amateur among the 30 chosen photographers. Upon his return, he got a different perspective on photography. But he had to make a living, so when he got an opportunity to work with A.R. Rahman, he became his personal photographer.

Master creator: Arun Titan wants to create sculptures that are rooted in culture.

Titan’s journey with stone began a few years ago, when he felt that photography did not fulfil his creative potential. One day, while on a courtesy visit, his college principal gifted him with a small bust of Periyar. While holding it, Titan could feel something shifting within him. He placed the statue on a table at home and wondered whether he could recreate something like it. That is how Silaii was born.

Mostly busts, each Silaii statue is unique and evokes curiosity. For instance, the statue of Karl Marx sizzles with life. Each crease on his suit is well defined, and his piercing glance makes his every quote on class and capitalism ring in your ears. Made with a combination of stone powder and resin, Titan’s sculptures are extremely durable. 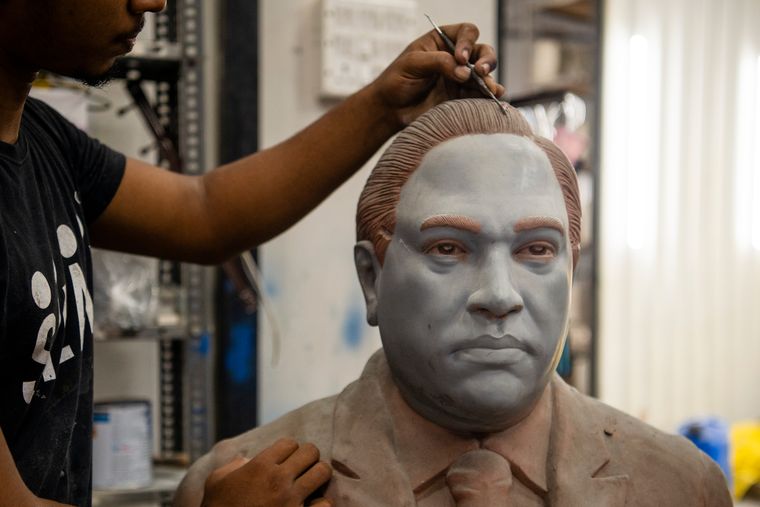 Not just Dravidian and political icons, Silaii entered the merchandise market when it was made the official merchandise partner for the Lokesh Kanagaraj directorial, Master, starring Vijay. The actor’s 2.5ft-tall statuette matches the first look photos from the film. “It was a breakthrough,” says Titan. “We were noticed by everyone.”

Apart from this, Titan makes exclusive sculptures on request. During the pandemic, he got many requests from families to make sculptures of their loved ones who had died of Covid-19. He recalls the time he couriered the statue of Covid victim to his family in Bengaluru. Three days later, he got a call from the man’s 26-year-old daughter. “There was complete silence on the other end,” recalls Titan. “A few seconds later, I heard a female voice sobbing. I was stunned and speechless, as I did not know who it was.” The woman broke down upon seeing her father immortalised in stone. Titan has many stories like this to narrate. 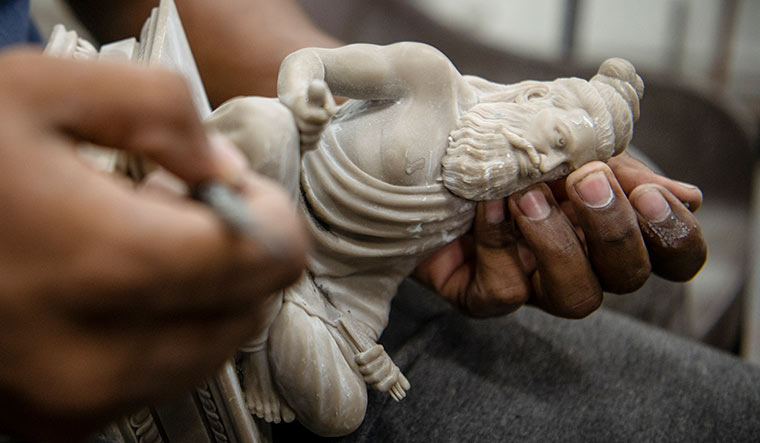 Now, he is looking to expand his business. He gets around 100 requests a day, especially for statues of Dravidian icons. As I walk out of his studio on the second floor of a dusty building at Pallikaranai, the Tamil letter ‘a’, beautifully carved in steel, almost like a mural on the studio wall, stands out as a testament to the creativity of Titan and his team.