How 'Queenpins' became its director couple's ticket to Hollywood 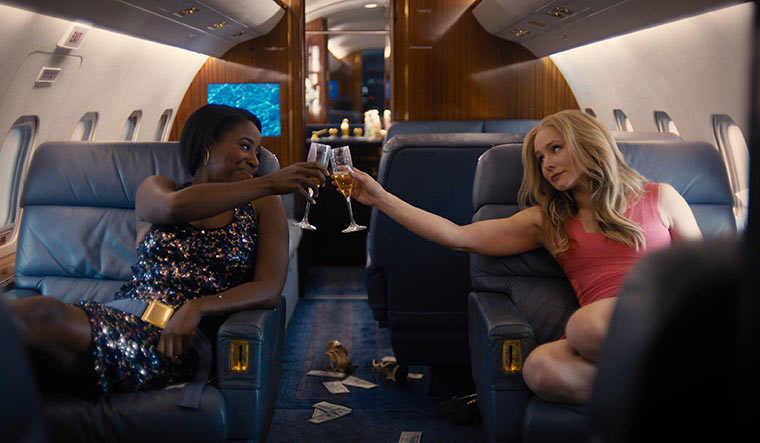 The high life: Kirby Howell-Baptiste and Kristen Bell in a still from Queenpins.

In 2012, an eight-week-long undercover investigation led to the arrest of three women in Arizona in what turned out to be the largest coupon counterfeit scam in US history. The women had created a lucrative scheme around fake grocery coupons worth $40 million.

Almost a decade later, a US-based couple Aron Gaudet and Gita Pullapilly adapted the real-life “shocking and sensational” story into a screenplay for Queenpins, which released in the US on September 10. Written and directed by the duo, it stars Kristen Bell and Kirby Howell-Baptiste (who was Bell’s costar in The Good Place and in the fourth season of Veronica Mars) as two undervalued lower-middle class women, who cheat the system and live the high life for a while before it all comes crashing down.

The release of Queenpins is significant for three reasons: its timing—a theatrical release at a time when the US braces itself for a third wave; the fact that the film’s worldwide rights were bought by STXfilms studio for $21.5 million; and, most of all, it has worked magic for Gaudet and Pullapilly, who have found “value, validation and opportunities” that had been eluding them for the last seven years, when they first moved to Hollywood.

“We were desperately looking for something unique, given that so much is already taken by Brad Pitt’s or George Clooney’s companies that you are always the last in line,” says Gaudet. “Queenpins has a lot to do with how we were feeling as writers and directors in Hollywood. We had spent the last seven years in Hollywood trying to make our movies. We would go in with scripts that financiers and studios would really love, and then we would have a great cast attached to them. But then they would say, ‘You guys do not have any value’, and we would hear that over and over again.” 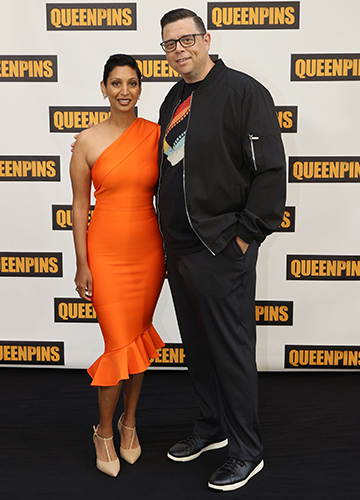 It was their love for filmmaking that brought Gaudet, an American from rural Maine, and Pullapilly, a US resident of Kerala origin, together in matrimony 12 years ago. And, it is that love that keeps them together. During a post-midnight video call with THE WEEK, the love between the two shows. Formally attired, the duo completes each other’s sentences. “We have no children. We have no debt. We do not own a house and live on rent,” says Pullapilly. “All of that just so we can remain true as artistes and don’t have to take work just to sustain ourselves.”

And that is evident in the couple’s filmography—The Way We Get By, a 2009 Emmy-nominated feature documentary on US troop greeters at a tiny airport in Maine; Beneath the Harvest Sky, a 2014 film directed by the duo in a quasi-documentary style using hand-held cameras; and now Queenpins. Each film and the awards and adulation it brought proved to be a stepping stone toz the next one.

But, the dream of “making it big in Hollywood” remained elusive until now. “Hollywood is a brutal business,” says Gaudet. “It makes you suffer. It feels like you are constantly fighting against the studio system to get your movie made and protect your vision, because as more and more people get involved they want to hit your budget and change things. It can be a real struggle.”

Queenpins gave them the much-needed break. Right from the time of ideation, the duo approached the plot with a “twist”, even as they stayed true to the real event. “We looked at making it into a dark comedy and that in a way lent it a more commercial appeal,” says Gaudet. “It also changed our own value in Hollywood as directors.”

The coming on board of stalwarts of comedy such as Bell, “who knows the best way to say a line that can get the extra laugh out” and Howell-Baptiste, whose Why Women Kill remains a work of repute in the genre, added to the “package” appeal.

The couple travelled to Arizona and met with the detective who led the investigation. They, however, decided against meeting the real masterminds of the crime. “We did not want to make this their story,” says Gaudet. “It is only inspired from the crime they committed, but the story remains ours as we created our own characters who have nothing in common with those women outside of the crime they committed.”

Gaudet and Pullapilly do not work in silos; it is truly a team effort. “Our cast and crew look at us as parents and so we cannot play one against the other,” says Pullapilly. Gaudet chips in, “When we are writing, there is not one aspect of the script which is not approved by us jointly. There have been times when we have spent countless hours arguing over the word ‘and’ in a script.”

For Queenpins, the producers felt the script was “perfect” as it was. “It actually felt great because it was like this feather in our cap to know that we actually wrote something that they felt held to their standards,” says Pullapilly. The feedback was all the more special because both Gaudet and Pullapilly were grieving the death of a parent—he, his mother’s, and she, her father’s—while researching the film. They shot the film from October to December 2020 in Los Angeles, at a time when Covid-19 was at its peak in the US. Fortunately, nobody tested positive.

Next on the couple’s to-do list is to find a producer for their script for Crook County. It was the first film script they wrote when they moved to Hollywood in 2014, but it never saw the light of the day despite “a zillion meetings with financers and producers”. Crook County is based on a real-life corruption sting in Chicago of the 1980s. “The reason we made Queenpins was to get enough heft so that Crook County can be made,” says Gaudet. “After all it is a film that needs a bigger budget, a large cast and is a prurient work.”

Though success has come knocking only now, as Pullapilly says, “Aron and I have always bet on ourselves. It has taken the industry a little longer to bet on us. But we realised that when they do, it pays off. Like the studios that bet on Queenpins are now in profit.”