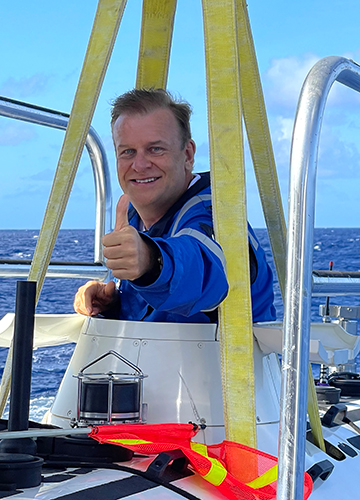 Jubilant moment: Harding emerges from the submersible after his journey | Giles Harding

As we chat over Zoom, Dubai-based explorer and businessman Hamish Harding, chairman of business jet brokerage company Action Aviation, holds up a glass bottle. Inside is a strange shrimp-like creature, with spindly legs and a clear, almost translucent, body. “It is a hadal amphipod,” Harding tells me smilingly. They are creatures you can find only at the bottom of the ocean, where Harding has been recently. More specifically, he was at a small valley called the Challenger Deep at the southern side of the Mariana Trench, 11km under the surface of the ocean.

Before the current more advanced submersible, called the Limiting Factor, was built, only two parties had been to the Challenger Deep—the US Navy vessel Trieste, which went there in 1960 (only seven years after the first ascent of Everest) and Titanic director James Cameron, who did a solo mission in 2012.

“The pressure down there is 1,200 times more than the standard atmospheric pressure at sea level (equivalent to the weight of 8,000 double-decker buses pushing down on the submersible),” says Harding. “These creatures survive by evolving bodies that allow the water to flow through them, to equalise the pressure. Nature cannot create a shell that is strong enough for them to withstand such pressure.” Harding and legendary undersea explorer Victor Vescovo, who together travelled to the Challenger Deep in a one-of-a-kind submersible, brought back a collection of such creatures which they have sent to the Aberdeen University in the UK for analysis.

Harding’s expedition to the Challenger Deep in March has earned him and Vescovo two new Guinness World Records—for the longest distance traversed at the bottom of the ocean (4.6km) and the longest duration spent there (four hours and 15 minutes). The 10-day mission began in Guam, a small Pacific island, from where a mothership, DSSV Pressure Drop—with a 35-member crew, including Harding’s 13-year-old son Giles—made its way to the crescent-shaped Mariana Trench, located in the western Pacific Ocean. Giles was constantly tracking and sharing his father’s progress on social media. Harding and Vescovo began their descent at 3:28am on March 5 and reached the bottom of the ocean in four hours.

“It was truly spectacular down there,” says Harding. “Obviously, it is pitch-black, but we had excellent floodlights. At the actual lowest point of the Challenger Deep, called the Eastern Pool, the floor is very fine silt, finer than sand. We were using thrusters to move around, but if the blast from the thruster hit the surface of the silt, it would cloud our view. So we had to be careful not to disturb the silt.”

There was also the risk of the thrusters getting entangled in the cables in the Mariana Trench, left by the remote-operated vehicles of different countries. But the biggest threat was when they suddenly discovered an unmapped undersea mountain the size of Table Mountain in Cape Town. “We encountered it while heading off in a direction that looked interesting on the sonar map,” he says. “Remember that there is no rain down there to weather down mountains, which tend to stay the way they were created. We did not know the cliff was there, because no one has been to that bit of the trench before.” They ended up damaging one of the thrusters. 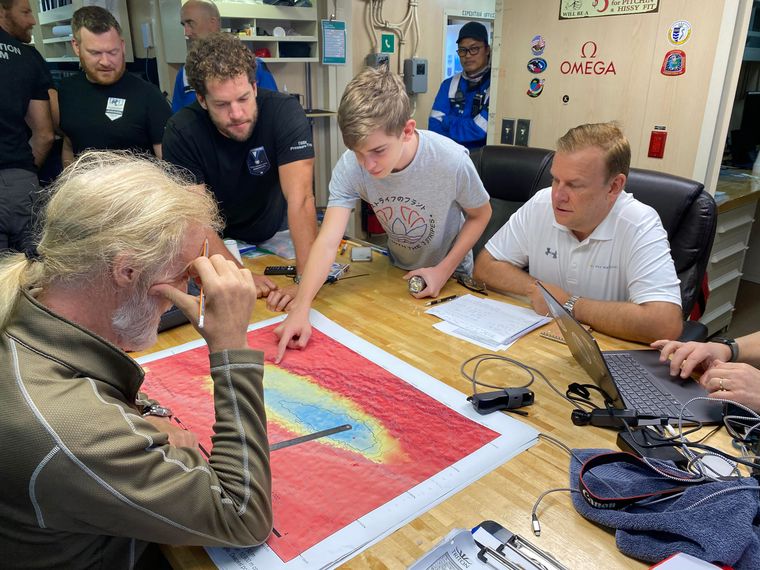 Was he scared? “It was potentially scary, but I was so busy doing so many things—navigating and triangulating my position—that I did not really have time to be scared,” says Harding. “The sub has many safety features, including four days’ reserve of oxygen, water and emergency rations. The only problem is that there is no other sub that is capable of going down there to rescue you. It will take three years to build another one. So, having four days of supply doesn’t make a difference really. If something goes wrong, you are not coming back.”

They were communicating with the mothership all the while using a sonar modem. “Today, we can use a billion bits per second, but under water, you can use only a few thousand bits per second,” he says. “We could communicate through short voice messages, a little like the radio messages you send in an aircraft. But electromagnetic messages don’t work underwater, so we could only send sonar ones, which take seven seconds to reach the surface. I was communicating with my son as well using both text and voice sonar. He jokingly asked me whether there were any megalodons (an extinct pre-historic species of shark believed to be one of the largest predators to have ever lived) down there. I had to disappoint him by letting him know that those existed only in Hollywood, not in the actual Mariana Trench.” 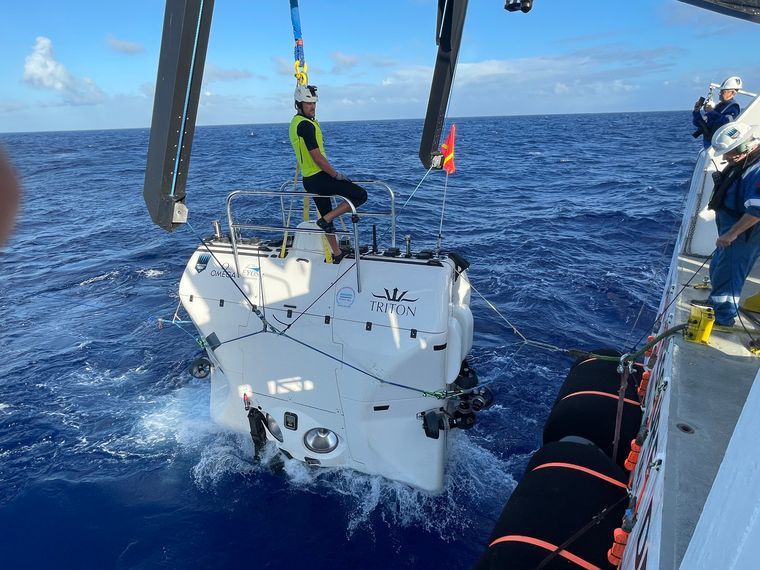 The submersible being lowered from the mothership | Giles Harding

Harding is no stranger to Guinness World Records, having set one in 2019 for the fastest circumnavigation of the earth via North and South Poles in a Gulfstream 650ER business jet. “I used to read the book of Guinness World Records regularly as a child,” he says. “I always wondered how I could get into it. I did not think I could do it. And I didn’t want to do something stupid—like setting a record for the number of ping-pong balls bounced in a day, or something like that.”

Harding also has the distinction of taking the oldest man (US astronaut Buzz Aldrin, at the age of 86) and the youngest (his son Giles, at the age of 12) to the South Pole. “Buzz is an old friend of mine,” says Harding. “We had always talked about going to the South Pole together and we finally did it in 2016. However, Buzz started suffering from a high altitude pulmonary edema right at the South Pole. The walk to the pole in very heavy equipment at -40 degrees and at 9,000 feet elevation proved to be too much for him.” The US military had to send in a C130 transport aircraft on skis which got Buzz out of the pole to an Air Force base on the coast of Antarctica and then on to a hospital in New Zealand. “But you cannot kill one of the biggest icons in the world on your trip,” quips Harding. “Otherwise, nobody would forgive you. Luckily, he survived.”

Harding’s next adventure is climbing Kilimanjaro in Tanzania with Giles. And then, a trip to the North Pole in April 2022. If there is one thing his adventures have taught him, it is that there is absolutely no reason why you cannot follow your passion. “People, especially as they grow older, tend to give up on their dreams,” he says. “When I think of something unusual, I just try to find ways to make it happen.”