I have been lucky to not get boxed, says Taapsee Pannu

On the sets with director Vinil Mathew.

Two individuals with very different personalities are united in an arranged marriage. The outgoing and sociable city girl, and the quiet and reticent small-town boy. They struggle to get along inside a big old haveli. This could have been the clichéd plot of an exhaustive list of Bollywood masala potboilers. Throw in an extramarital affair and a charming diva—who is a grieving widow, an adulteress and a murder suspect—and you get Vinil Mathew’s Haseen Dillruba, a dark and intense drama which released recently on Netflix. Mathew deliberately repackages a clichéd plot by riding on the might of Taapsee Pannu’s blazing Rani Kashyap, who carries the story on her shoulders effortlessly.

When an irritated Rani describes her husband’s performance in bed to her mother as, “Uski ghanti baji, mandir band” (Once his bell rang, the temple was closed for business), her sting is hard to miss. And that is where the challenge lay. It was important for Pannu to bring out Rani’s complexity and layered temperament so that she would resonate with the audiences. But when you yourself do not identify with the character at a personal level, how difficult can it be to do justice to her? “That was the conflict,” Pannu told THE WEEK. “I was trying to portray her in a way that the audience would not hate her. They can dislike her for the things she does, but I did not want them to hate Rani, because then they would get disconnected from the film, as it is wholly from Rani’s perspective.”

Shot over 60 days, mostly inside a quaint haveli, in temperatures as low as 5 °C, the film, which is Pannu’s first with director Vinil Mathew of Hasee Toh Phasee (2014) fame, took an emotional and physical toll on the actor. “There were times when we were shooting at night in extreme cold temperatures and I was wearing just a sari. We were shooting for 18 hours a day,” she says. At the same time, she was preparing for the final part of her film Rashmi Rocket, which required her to train for two hours a day. Fortunately, a big chunk of Haseen Dillruba’s shoot had got over just a few days before the pandemic began last year.

Pannu is not new to carrying a film on her shoulders with her onscreen charm and strong performances. In less than a decade in Bollywood, she has pulled off some of the most memorable roles in films like Saand ki Aankh (2019), Thappad (2020) and Naam Shabana (2017), all of which were female-centric. Experts agree that the one thing which sets Pannu apart in an industry driven by stereotypes is her knack to be equally convincing in the ‘non-conflicting’ roles as when she is playing characters with negative shades—like the dark and scheming girlfriend in Badla (2019). “I have been lucky to not get boxed,” she says. “I have done diverse films, ranging from action to comedy and romance, and also commercial films like Judwaa 2 (2017). I have no complaints about the variety of roles I am offered.” 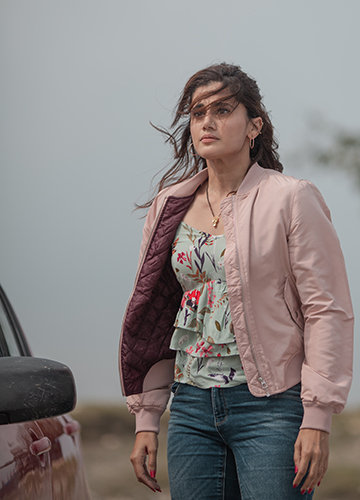 Power packed: Pannu in a still from Haseen Dillruba.

This way she can have the best of both worlds, of mainstream and offbeat cinema. At a time when actors consider it fashionable to pursue one film a year, Pannu has her calendar full with five upcoming releases this year alone. These include the Viacom 18-produced Shabaash Mithu, a biopic on cricketer Mithali Raj, and Woh Ladki Hai Kahaan?, produced by Siddharth Roy Kapur. “People think I do a lot of films, but you should see the number of films I say no to,” she says. “I have very carefully selected my scripts. These are ones I just cannot hand over to someone else on a platter, because I know each is different from the other. The only stereotyping that happens with me is that I will not do frivolous stuff.”

Pannu’s career took off with seven films in three different languages (Malayalam, Tamil and Telugu) in a single year (2011). Her last film, Thappad, failed to score at the box office, barely managing to collect Rs14 crore on its opening weekend. Her first this year, Haseen Dillruba, too, opened to mixed reviews. “Movie reviewing is very subjective,” she says. As she tweeted recently, when the lens is not skewed, criticism of the film and character is welcome as it helps her learn and improve. The actor has always been vocal, especially on issues related to feminism, wage disparity in Bollywood and the growing acceptance of female-driven narratives in Hindi films. This tendency to engage in socio-political issues, some say, was the reason why income tax raids were conducted at her home, even as she was busy shooting for Dobaaraa in Pune. In her uncanny way, Pannu cleared the air over the raids and, to the remark of Kangana Ranaut’s sister Rangoli that she was a “cheap alternative to Kangana”, shot off sarcastically, “Not sasti (cheap) anymore”.

As someone without a godfather in Bollywood or any formal training in acting, Pannu’s entry into the industry was more by chance than by choice. An engineer, she had set her mind on pursuing an MBA when she got flooded with modelling offers. Before she knew it, she had signed her first film, Jhummandi Nadam (2010), and three more films after that. Over time, she has worked with a dozen different directors and producers. Her only remaining wish is to be reckoned as an actor on whom one can bet big.