Everyone called her ‘Nehru’s bride’. She was the one chosen to garland Jawaharlal Nehru, the then prime minister, and place a tikka on his forehead when he visited Jharkhand in 1959 to inaugurate the Panchet Dam built across the Damodar river.

Garlanding Nehru was considered a violation of the Santhal tribe’s traditions. The whispered conversation among the villagers became louder, and the 15-year-old was ostracised from her community. Being ‘Nehru’s wife’ even cost Budhini her job—she used to work for the Damodar Valley Corporation, carrying bricks for the construction of the Panchet Dam.

In her novel Budhini, Malayalam writer Sarah Joseph captures the travails of the Santhal girl. When Joseph set out on a journey to Panchet, little did she know that Budhini was still alive. For her, the trip was a pilgrimage of sorts. All she hoped for was to meet Budhini’s relatives and gather information about how she lived and died. But during a stopover in Dhanbad, she came to know that Budhini lived at the Damodar Valley Corporation Staff Quarters, or the D.V.C. Colony. “I got to meet her and it was amazing. She is now in her seventies. She is my age,” says Joseph.

It was Rajiv Gandhi who reinstated Budhini at the D.V.C after she lost her job. “Budhini now receives a pension from the D.V.C. She lives with her daughter,” adds Joseph who first heard about the tribal woman from Civic Chandran, a poet and political activist.

Budhini epitomises the essence of ostracism. The delightfully-written novel goes beyond depicting the chequered life of a woman. It tells a powerful story of subaltern resistance, which is often weakened by an overwhelming sense of hopelessness and helplessness. Joseph’s writing, in many respects, is reminiscent of that of activist-writer Mahasweta Devi. Like Aalahayude Penmakkal (Daughters of God the Father) that won her the Kendra Sahitya Akademi award, Budhini echoes her deep concern for displaced people.

“While the Panchet dam was being built, several tribal villages got submerged and people were rendered homeless. The Santhals worshipped their rivers and believed that rivers should be allowed to flow freely. Their fight against dams dates back to the colonial era,” says Joseph.

According to her, the Santhals have played a key role in Indian history. “However, their contribution has gone unrecorded. In our history books, there is no mention of Tilka Manjhi, who can rightly be called India’s first freedom fighter. Manjhi, a Santhal tribal leader, put up a brave front against the British in the beginning of the freedom struggle,” she says.

Budhini is told through the perspective of Rupi Murmu, a journalist who sets out on a journey to find out the truth about the tribal woman, along with a freelance photographer friend. “Budhini is a novel based on a news article,” clarifies Joseph. “It is not her life story or a historical novel. I started writing it as a story of Budhini who was dead. While writing it, I took utmost care on how to merge news and fiction.”

The book has been translated into English by Sangeetha Sreenivasan, Joseph’s daughter, a novelist in her own right. Sreenivasan, who lives with Joseph, accompanied her to Panchet. “We went to traditional Santhal villages dotted with tiny houses, with walls plastered with mud and cow dung. On them, the tribals have painted figures of birds, animals and trees, besides hunting scenes or dancing humans. We had tribal food, too,” recalls Sreenivasan.

Budhini is a rare blend of fact and fiction. “One can often find more truth in fiction than in fact,” says Joseph with a smile. 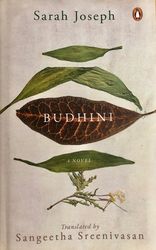