In these deeply fractured days, there is one thing that everyone seems to agree upon—that the media is facing a crisis of credibility. A problem further heightened by television’s vicious 24/7 news cycle and the online warriors with their colourful opinions. The journalistic fraternity has occasionally tried to introspect and find out where it has gone wrong, which has often led to some form of course correction. Veteran journalist Alok Mehta’s new book, Power, Press and Politics, is an attempt to do this.

“Extreme work pressure, time constraints, the competition to survive, and the culture of paid news and advertorials adopted by the media houses for their survival have caused huge damage to the integrity of newspapers,” the author writes. Mehta, who completed 50 years in journalism, provides an insider’s account of the working of the media, particularly print media. He spent most of his career helming Hindi publications like Outlook Hindi, Hindustan, Navbharat, NaiDunia and Dainik Bhaskar, among others.

Mehta has been a witness to some of the epochal events in the country which shaped journalism as we know it today. From this vantage point, he talks about key political personalities and journalists of his time. He speaks highly of editors like Rajendra Mathur, Manohar Shyam Joshi and Vinod Mehta, with whom he worked as they built their publications.

He also throws light on what several other key editors did, providing the current crop of journalists with a historical perspective on what shaped the profession and led to the dilution of the editor’s power due to market pressure. He writes about how newsrooms handled pressure from politicians or the management, and how several veteran editors lost their jobs because a senior politician did not like their stories. That tribe of editors is dying out, being replaced by those who shift their ideological stance in accordance with the governments in power.

Could the story have been different if some prominent media personalities had resisted this pressure? Mehta writes about how the Indian press accepted its lowly fate during the dark days of the Emergency. History remembers those who stood their ground and became beacons for future generations of journalists.

“I&B Minister Vidyacharan Shukla described Emergency as the beginning of a new era. In future, no confrontation would be permitted between the press and the government. Censorship and news management were throughout arbitrary, if not illegal. It was a mafia operation, enforced capriciously,” Mehta writes.

The author served as president of the Editors Guild of India, a body set up after the Emergency to uphold the interests of journalists when pitted against ruling governments. Mehta details some of the work done by the body during his tenure.

Through several chapters, Mehta talks about the stories he broke—like the ones on the godman Chandraswami and the fodder scam—and addresses issues like paid news. The media’s credibility may be under question, yet it remains the most trusted source for news, despite the onslaught of social media. Paradoxically, unlike in the rest of the world, the number of new TV channels and print publications continue to rise in India. In 2019, India added nearly 1,498 new publications, taking the total number of newspapers and periodicals to 1,43,423.

The anecdote-rich book gives a history lesson to the current crop of journalists, media students and practitioners. It will be a valuable source to those interested in understanding Indian media, what ails it and its evolution in the last few decades. 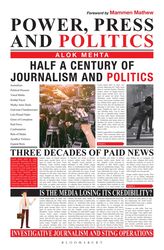