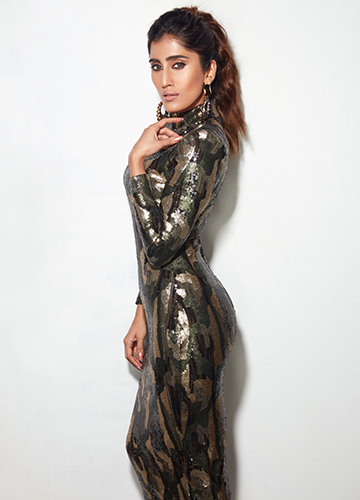 Singer Akasa’s pop single ‘Naagin’ (featuring Vayu, Aastha Gill and Puri) received more than 170 million views on YouTube in less than a year. ‘Dhoondti Firaan’ is her critically acclaimed collaboration with alt-rock band, The Yellow Diary. Her single ‘Naiyyo’, featuring Raftaar, has been #1 on TV since its release, and trended at the fourth spot on YouTube. Her new single ‘Shola’ is a high-energy, desi dance number.

Q\ What was the thought behind ‘Shola’?

A\ Honestly, I have never really had one particular thought behind making a song. [Singer] Charan came up with the hook of this song and asked me to jam on it. If I had to pinpoint the thought behind it, then I would say it is literally about having ‘fun’ and that is what we have done—while writing and composing the song and while shooting it.

Q\ From ‘Nagin’ to ‘Shola’, all your songs have been vastly different.

A\ I have been lucky to be part of such a versatile range of songs. I still have not done a “sad” song and I really want to. My favourite songs would have to be ‘Dhoondti Firaan’ (with The Yellow Diary) and ‘Dil Na Jaaneya’ (with Rochak and Lauv). I feel I am the most connected to music when I sing in this mellow, Sufi style.

Q\ You have collaborated with such varied artistes as Aastha, Raftaar and The Yellow Diary. How do these collaborations come about?

A\ I am very lucky to have a team at Sony Music that is on board with my vision and they have been instrumental in a lot of these collabs. With Raftaar, it was such a huge compliment that he liked and wanted to collaborate on ‘Naiyyo’, a song that I had written and composed myself. Someone suggested jamming with The Yellow Diary because I have always been such a big fan and ‘Dhoondti Firaan’ happened. With Aastha, we were just two girls having fun, clicking pictures… our label picked up on that chemistry and made ‘Naagin’ happen.

Q\ Do you write your lyrics?

A\ I have started writing my own songs. ‘Naiyyo’ was the first one, then ‘Shola’, and there are a couple more in the pipeline. There is no particular thought process as such. It depends on what I am relating to. ‘Naiyyo’ started out as a sad song. It was what I was going through at that point. ‘Shola’ was just fun—it is about a girl who is the epitome of the word “chill”.