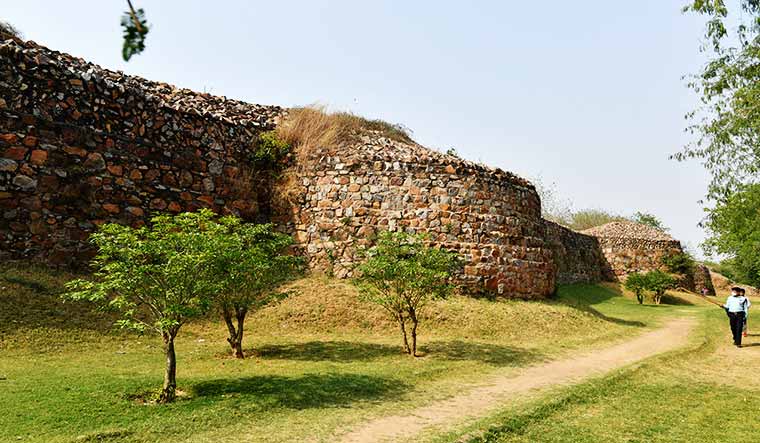 Blast from the past: A restored part of the wall of Lal Kot in Delhi | Arvind Jain

Using a long wooden stick, Hari Singh is tracing a map of “Lal Kot” on a dirt track in Sanjay Van, the rambling city forest in the heart of Delhi. “Here is Qutub Minar, that is the tomb of Adham Khan, and the walls of the fort travel around MB Road in Saket, all the way to the buildings there. Here is part of the wall rising in the middle of the forest,” says Singh, who works with the Archaeological Survey of India’s Qutub Minar Circle. The untamed forest around us is dotted with ancient ruins and ravines. Standing at the foot of a soaring rampart wall, Singh explains how Lal Kot was the original Red Fort of Delhi, built and expanded by the Rajput Tomars and, later, by Prithviraj Chauhan. “What we now call South Delhi should have been Old Delhi. But as history would have it, the Red Fort of Shah Jahan became the purani Dilli (old Delhi) side,” he says.

If the epic Mahabharata is treated as history, then the earliest settlement at Delhi was set up by the Pandava prince Yudhisthir, as the formidable city of Indraprastha. Since then, Delhi has been continually razed and rebuilt by emperors, kings and sultans. When historians talk about the seven cities of Delhi, they are usually referring to a period between 1100 AD and 1947 AD. This includes fortifications from Lal Kot to Lal Qila, and old historical cities like Prithviraj’s Rai Pithora and Siri to Tughlaqabad and Shahjahanabad.

The valour of the Chauhan dynasty is much celebrated in literature and legend. The Chauhans of Ajmer had defeated the Tomar Rajputs in the middle of the 12th century; Prithviraj was later defeated in the Battle of Tarain in 1192 AD, after which the Delhi Sultanate was established. But little is known of the heroic deeds of Tomars, who reigned over parts of present-day Delhi and Haryana between the eighth and 12th centuries. That is now set to be revisited, particularly the legacy of the emperor Anangpal II, popularly known as Anangpal Tomar, who is credited with building Delhi’s first Red Fort in the 11th century.

The Tomar kingdom, which is believed to have laid Delhi’s foundation as an urban settlement from 736 AD onwards, reached its pinnacle with the reign of Anangpal II, who is considered to be the founder of “Dhillika Puri”, which eventually became Delhi. It was during his rule in the 11th century that Lal Kot and Anangtal Baoli (both in South Delhi) were constructed.

And now, the National Monument Authority (NMA), under the Ministry of Culture, wants to declare both as “Monuments of National Importance” in a bid to “correct history”. A committee called the ‘Maharaja Anangpal II Memorial Committee’ has been formed to popularise the legacy of the king. A grand statue of Anangpal II and a museum are envisaged. 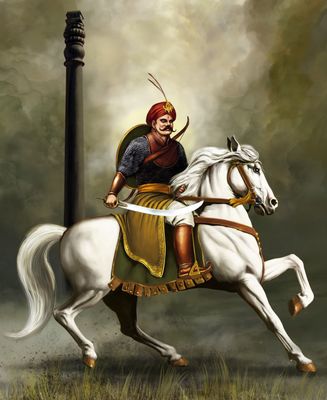 In a national seminar held in February, archaeologist B.B. Lal, who was recently awarded the Padma Vibhushan, insisted on urgent excavations in Anang Pur, a township not very far from Anangtal, for architectural and sculptural relics. “Whatever remains ASI has found show Anangpal as a king who built Dhillika Puri with the passion of a visionary,” says Tarun Vijay, chairman of NMA. “His Anang Pur dam (a national monument under ASI, near Surajkund in Faridabad, Haryana) is a marvel of irrigation technology from a thousand years ago.”

No one really disputes the building prowess of the Tomar Rajputs and the significance of Anangpal II in Delhi’s historicity. Rana Safvi, author and historian, starts her book on Mehrauli by describing Lal Kot. “Anangpal’s legacy can’t be disputed. The oldest surviving monument of Delhi is Surajkund in Faridabad; it was built by Anangpal II. As far as preserving his legacy is concerned, we can definitely highlight Lal Kot and conserve and showcase it better,” says Safvi.

Upinder Singh, historian and author of A History of Ancient and Early Medieval India, says the connection between the Tomar Rajputs in the early medieval period and Delhi is well established and documented from previous Lal Kot excavations. But there is hardly any biographical information on Anangpal II as there were several kings with the same name in that era. “I don’t know of any sources to rebuild his life,” says Singh.

According to noted historian Harbans Mukhia, “Anangpal II had fought and lost battles to Mahmud of Ghazni. Before losing, Anangpal had also offered to help Mahmud to fight his other enemies. But the Ghaznavid did not need his help. After his defeat, Anangpal II is supposed to have submitted to Mahmud fully; they entered into a peace treaty.”

An essay titled New Light on the Tomars of Delhi by Dasharatha Sharma, a much respected historian at the Delhi University from the 1950s to 1970s, supports this view. “Had it been possible for the Tomaras to continue this anti-Ghaznavite policy, they might have occupied a very high place in our history. But for a people with limited resources, and fighting all the time against their neighbours, it was no easy task,” writes Sharma.

The journey from Lal Kot to Lal Qila has several other myths and legends strewn within it. As most will agree, highlighting one does not take away from the truth of others.