Hinge book review: Pointers on how to remain mentally healthy

In her book, Hinge, Vandana Kohli advocates a dynamic stability in our lives. She quotes a letter Albert Einstein wrote to his son in 1930, comparing living to riding a bicycle. To keep your balance, you must keep moving. Although she says that such balance is the norm and does not require enormous reserves of strength and will power to maintain, mental imbalance in our society is becoming increasingly prevalent. Hinge is a thesis on why this is so, and how you can regain emotional wellness in your life.

The book is divided into three sections: Normal, Unhinge and Hinge. In the first section, she talks about various norms in society that impact our wellbeing. The second part delineates the reasons you might come mentally unhinged, resulting in anger, personality and bipolar disorders, depression, inability to focus and scattered thoughts, among other things. The third part offers an antidote to the above problems and propounds ways in which you can lead a healthy and centred life.

The book lies at the intersection of science and spirituality. The cited surveys, empirical data and expert inputs in the first half give way in the second to a greater emphasis on Hindu philosophical thought and ancient wisdom that she has drawn from personally. Much of this is practical advice that can be implemented.

For example, in the section on how to remain centred and avoid extremes in your life, she talks about moderating our emotions. Such as recalling the kindness or encouragement a colleague might have offered previously, even if her actions irk us now. Separating an offence from the offender. Keeping our options open to incorporating others’ point of view while selecting what works for us. Reconciling perspectives to look at the big picture as well as the specific details. “The centre thus tempers conflict,” she writes. “It makes our responses stable. Stable emotions allow us to adapt continuously. Because we aren’t consumed by the flux of the extremes within, our attention is accessible for us to do other things.”

What adds heft to the book is the numerous case studies she has peppered it with. Whether it is DP who tried to forcefully mould his daughter-in-law to his ideas or Maya who felt suffocated by intense familial scrutiny or Dee who bears the emotional scars of her father’s abusive behaviour, the case studies not just make the book more interesting, but also help place our own problems within the spectrum of those faced by others. We might all be broken in our own ways, but then, we are not alone in our brokenness, Kohli seems to imply. And there is always the hope of healing. The light at the end of the tunnel might be closer than we think it is. 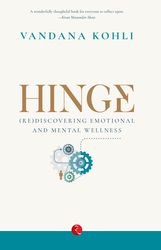