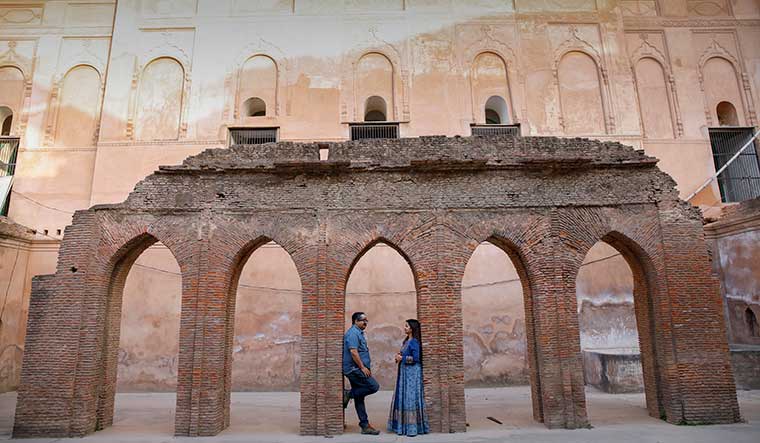 Kiss of life: Syed Mohammed Haider Rizvi, a lawyer, and his wife Sanobar, in front of the restored Sibtainabad Imambara in Lucknow | Pawan Kumar

In a tightly packed neighbourhood of narrow lanes and narrower homes in Lucknow’s Talkatora lies the tomb of Begum Akhtar—the queen of ghazals. For more than 37 years after her death, most residents of the area were clueless about the final resting place of that singer with a luminous voice. To them, it was just a dark, tin-roofed mausoleum best bulldozed to make some space.

In 2010, Shanti Hiranandani, one of Akhtar’s best-known disciples, who addressed her as ‘ammi’, voiced her distress at the condition of her ustad’s grave. Hiranandani, then past 70, was afraid that the grave might fall into further disrepair after her time.

A restoration effort was launched by Lucknow-based Sanatkada, a space for arts and crafts, co-founded by social activist Madhavi Kuckreja. In response to Hiranandani’s request to then prime minister Manmohan Singh, the ministry of culture granted Rs5 lakh for the project. A couple more came from donations—but none from Lucknow’s own residents.

“I have never understood the reason for that,” said Kuckreja, whose next project is Lucknow Bioscope—a museum of the city’s culture.

Sanatkada, itself, is housed in Qaiserbagh—a heritage zone, where no alterations that take away from the original spirit of the space are permitted. Yet, the municipal authorities have painted tree trunks bubble gum pink and bright blue.

For Akhtar’s tomb, the restoration team had just one clue—that the singer wanted to rest beneath the skies. Thus, the tin roof had to go. The tombs of Akhtar, and her mother, were covered in marble with inlay work. A fan was fitted to permit her admirers to pay their tributes in comfort during the summer months. Hamid Ali, a handyman and the immediate neighbour of the tomb, now ensures the site’s upkeep. And, every year on her death anniversary, renowned singers such as Shubha Mudgal perform for a small group (around 40 people) which can fit into the space.

Wajahat Habibullah (sitting), with his son Amar and daughter-in-law Jyotsna in front of the restored Habibullah Estate | Pawan Kumar

Access to the grave is still difficult. The administration’s sole contribution has been a small signage to mark its presence. In a city of numerous world-renowned artists and writers; and monuments that are marvels of science and beauty—such neglect is difficult to understand.

Said Yogesh Praveen, an author, “When I ask officials why they do not take a greater interest in preserving heritage, they tell me that from 10am to 5pm, their biggest task is to save their jobs.” Praveen, who is a specialist on Awadh culture, died on April 12.

Vipul B. Varshney, an architect and convenor of the Lucknow chapter of Indian National Trust for Art and Cultural Heritage, said preservation of heritage required “both political and administrative will”. A couple of years ago, Varshney compiled a 1,000-page document of 175 heritage monuments in Lucknow and handed it over to the administration for action. She has not heard about it since.

“Heritage conservation has to be built into town planning. Yes, this will mean that certain infrastructure [like flyovers] will not be permitted to be built around protected areas, but in many cities of the world, the old and the new exist happily,” said Varshney.

Why that does not happen in India could in large parts be attributed to a collusion between the rich lobby of builders (or developers as they are called) and political parties.

According to the Archaeological Survey of India, an ancient monument is “any structure, erection or monument, or any tumulus or place of interment, or any cave, rock-sculpture, inscription or monolith which is of historical, archaeological or artistic interest and which has been in existence for not less than 100 years….”

Tomb of Akhtar before restoration.

Syed Mohammed Haider Rizvi, a lawyer, stumbled into the role of the restorer of one such monument—the Sibtainabad Imambara (a place of prayer and mourning especially during the month of Moharram) by chance in 2008. In a city of many imambaras, Sibtainabad, was an abused gem hidden in plain sight. It lay behind an imposing darwaza (gateway) laced with a tangle of electric wires, in the heart of Hazratganj—one of Lucknow’s busiest markets. The lawyer was chosen by the Shia Waqf Board to be a trustee of the committee tasked with restoration and care of the monument. Haider (the name Rizvi goes by), a student of history, discovered that the monument served as a car garage and a furniture storehouse, among other things. This, despite the fact that in 1919 the monument—the construction of which was initiated by Amjad Ali Shah, the fourth king of Awadh—had been declared protected by the lieutenant governor of the United Provinces of Agra and Oudh (now Uttar Pradesh).

Haider’s first step was to hunt for information. He was stumped by its paucity. He asked the ASI what it had done for the protection of the monument, and the Lucknow Development Authority how it had laid claim to the monument and collected rent from houses that surrounded it.

“It then hit me that this would become a lost monument,” said Haider.

Haider, and his wife Sanobar, also a lawyer, filed 15 applications under the Right to Information Act. The latter took it upon herself to document the imambara’s glories in a book called Sibtainabad: Through the Lens of Time.

In that book is a quote that described the imambara “…The materials used… are bricks of the usual small Nawabi type and stucco; the interior is sumptuously decorated… in a variety of hues.” None of that was visible in 2008. There was a cracked ceiling through which water would gush in, bringing the neglected monument closer to ruin.

Under the guidance of the Shia cleric Kalbe Jawwad, and support from the imambara management committee, the constant follow-up by the Haiders elicited response from the ASI. Between 2008 and 2017, Rs2.11 crore was spent on its restoration. It caught the attention of Lucknowites like few monuments ever had.

The Haiders petitioned the High Court in 2013, asking that the ASI and other authorities be asked to locate lost heritage monuments, remove encroachments, demolish illegal constructions and the like. In 2018, the Sibtainabad Imambara became the state’s first monument to have its own set of by-laws under the Ancient Monuments and Archaeological Sites and Remains Act, 2010.

Haider, now designated caretaker of the Sibtainabad Imambara said, “The biggest challenge to preserving our rich heritage is that the state does not have heritage by-laws”.

Across this larger slice of history, is the erstwhile Delhi and London Bank—a property that is now the residence of the Habibullah family.

The family matriarch, Inam Fatima Habibullah (1883-1975) was a prominent social activist and a member of the Muslim League, who had vocally opposed the idea of separate electorates for Muslims. Her daughter, Tazeen Faridi, was a women’s rights activist of renown like her daughter-in-law Hamida Habibullah, a widely respected parliamentarian. Wajahat Habibullah, Hamida’s son, served as chairperson of the National Commission for Minorities and was the first chief information commissioner. His grandfather Sheikh Mohammad Habibullah was vice chancellor of the University of Lucknow (1938-41) when the likes of Shankar Dayal Sharma (the ninth president of India) were students. His father, Enaith, served as founder commandant of the National Defence Academy (1953-58) in Khadakvasla.

Said Wajahat Habibullah, “The original house remained of political and social importance until the passing of Sheikh Mohammed in 1948. It remained a social hub thereafter, but we had to wait for my mother to enter politics in the ‘60s for it to have political significance again”.

In 2011, his son Amar and daughter-in-law Jyotsna Kaur, with the approval of their grandmother Hamida—then the only resident—restored the crumbling facade of the older property. This predated the family’s living quarters, built in the 1930s.

“Except for replacing the roof—which was of Burma teak, we maintained the original look of the building,” said Jyotsna.

The restored space—which recasts most of the original bits of the building including the iron grills, gates and fireplaces—now forms Lucknow’s only high-end retail space housed in a heritage property. An open seating space for a café is shaded by trees—some of which are close to a century old. Spacious bathrooms still have centuries-old French tiles, while railway sleepers buttress the 22-foot-high ceilings.

Said Jytosna, “We wanted to retain the integrity and the strength of the space, so opted for brands which were high value and would match the grandeur of the building.” She hopes the couple’s sons, now aged 15 and 12, will appreciate that they live in a space that is not “matter of course” for everybody.

“You leave it behind for posterity,” said Jyotsna.

This act of saving the past for the future often falls in the hands of those who are not officially tasked with it. Saiyed Anwer Abbas, an engineer, now 82, has documented numerous structures of Lucknow.

He said, “Lost monuments are either completely destroyed, effaced or not looked after. It [the neglect] might be a matter of government policy as maintenance requires money. But to leave behind history is also to leave behind its lessons.”

And that is what Lucknow’s heritage warriors are battling against.