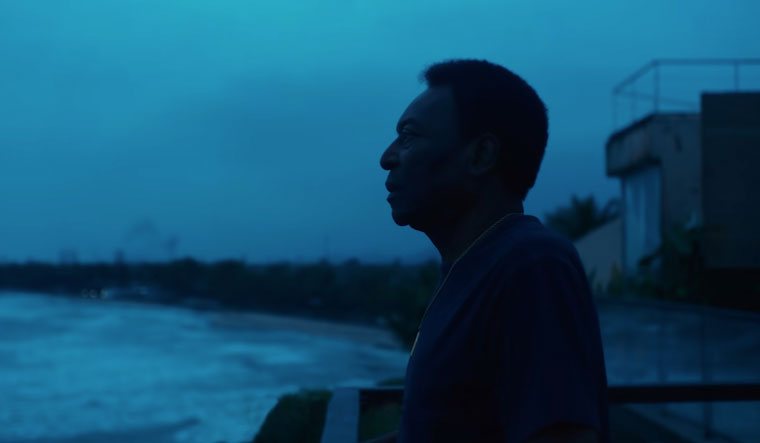 Much of Pele’s modern-day legacy is limited to his phenomenal achievements, be it the 1,279 career goals or the three FIFA World Cup victories. While these should prove sufficient to establish his greatness, some Brazilians look at him as the man who was silent in the face of oppression in his country.

A new Netflix documentary, Pele, goes beyond the legendary tales of his goalscoring prowess to paint a picture of a disturbed man in an equally disturbed society. Pele is now 80, needs walking assistance and is frequently hospitalised. In the twilight years of his life, he reveals what transpired over half a century ago.

The documentary is a straight-forward one; ordinary, compared with the mastery of Asif Kapadia in Maradona (2019). That has largely to do with the fact that Pele led a rather ordinary life—unlike the mercurial Argentine—and that there is limited footage available, given that his was a time before the television boom.

Pele benefits tremendously from an extensive interview with the man himself, but it is more than a hagiography. It is almost like a revisionist take on the golden era of Brazilian football.

There are a few startling revelations. His admission of infidelity is limited to a passing mention, and rightly so. What is shocking to learn is that his decision to play in his career-defining 1970 World Cup was a result of political pressure.

The 1960s was a dark period for Brazil. Following morale-boosting World Cup wins in 1958 and 1962, a military coup that overthrew the elected government in 1964 would cripple the nation for the next two decades. The ignominy of Brazil’s early exit in the 1966 World Cup made matters worse and Pele reveals he decided to never play in the tournament again.

For all the criticism that Pele remained neutral to the political developments, it was almost as though two realities existed simultaneously in Brazil. One of torture under dictator Emilio Medici, and another of joy provided by ‘King’ Pele with his local Santos team. Medici ensured the entertainment never stopped and insisted that Pele play in 1970. The footballer admits to being helpless in such an environment and “not understanding politics”.

No matter how famous Pele became, journalists testify that he was always mild-mannered and gracious with everyone. But, on the inside, Pele was a deeply emotional man. In 1958, he bawled on the field after the final. In 1970, overwhelmed by the weight of expectation, he cried in front of his teammates just before the final. And, he still tears up when he recollects that day. “At that moment, I didn’t want to be Pele,” he says.

Pele shows us that to Brazilians the footballer was truly a larger-than-life superman. It is also a reminder of the tightrope such supermen have to sometimes walk when forced to choose between condemning political oppression and protecting their own interests.