It was on a family holiday in Hiroshima that the morning bulletin on her phone brought Pallavi Aiyar the news of eight-year-old Asifa Bano’s gangrape.

In a benumbed world—an apt word to describe the aloofness that most people feel to the horrors in the newspaper—she found that her “body revolted’’.

“I felt winded, emptied of words, stripped of succour,’’ she writes. A Thousand Cranes for India: Reclaiming Plurality Amid Hatred, an anthology, is the result of this heaviness and despair. An anthology edited by Aiyar that aims to fight to reclaim her India.

Strangely, it was another girl, a victim in another tragedy in Hiroshima, Sadako Sasaki, that gave Aiyar the idea to fold “the depravities of the world’’ to transform it into a “weightless being of beauty’’. There is a legend in Japan that if you fold one thousand paper cranes your wishes will come true. Sadako was two when the atom bomb was dropped on her city in 1945. Sadako lived, but only to die later with leukaemia. As the cancer slowly hollowed her out, Sadako folded paper cranes in the hope for a prayer. She did not beat the cancer, but her cranes became immortal—the symbol of healing and hope. Each year school children and people fold them in solidarity.

Bringing together the best writers in India to use their words, Aiyar has chosen to fold away the assault on the idea of India into a crane—to offer resistance her way: with words.

The anthology has 23 pieces. Tishani Doshi, Annie Zaidi, Anjum Hasan, Sudeep Chakravarti, Shovon Chowdhury and Prajwal Parajuly are just some of the writers. Each writer uses the crane to create powerful pieces. Each piece is beautiful and some linger in your head for days. The crane flies across each piece as a motif—in the centre—or a metaphor, reinterpreted in different ways.

The anthology took over two years to be born. But Aiyar has managed to cram in something for everyone in it. It brings together different genres.

Like India’s diversity, the collection, too, has reportage, poetry, polemic. There have been many anthologies that deal with plurality, but there are few that have been as heartfelt. Jonathan Gil Harris writes about his mother Stella Freud and her Chinese chest. It lies in the sparse living room of their house in New Zealand, hiding the secrets of her mother’s childhood. Then, there is Samrat Choudhury’s piece that talks about friendship with Aziz, a Pakistani from Gilgit and their visit to Hiroshima. Filmmaker Natasha Badhwar, who travels with her daughter, writes about “depression that clings like a weight around my ankles, slowing me down, holding my back”.

Heart-warming as well as heart-breaking, the anthology is an antidote for anyone who felt helpless—there is a tribe, and for once it is not just on Twitter but in the comfort of black and white—but it is also very much a battle plan. These, then became the weapons to fight for her India as Aiyar writes. It is her army of words marching out in the world. The only way forward is hope.

Every bookshelf needs a battle plan. It is simple: gentleness, kindness and action. 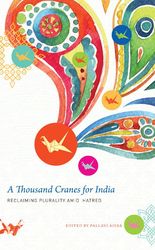 A Thousand Cranes for India: Reclaiming Plurality Amid Hatred