Queen to the fore 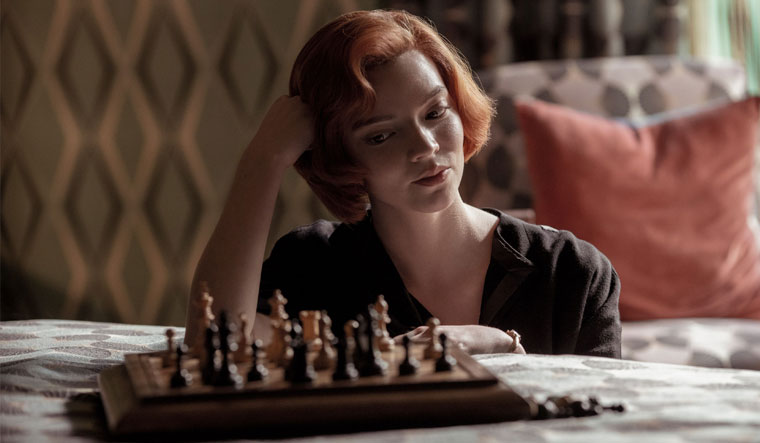 It is not every day that Garry Kasparov consults for a web series. That itself should evoke curiosity about The Queen’s Gambit, the seven-episode drama series on Netflix. The series is based on Walter Tevis’s eponymous novel published by Random House in 1983.

It is the story of how chess prodigy Beth Harmon—who was orphaned at nine and committed to the care of the state—literally played her way out of an orphanage’s basement to the biggest stage there is. En route to dizzying heights, Harmon (Anya Taylor-Joy) meets tranquillisers, alcohol, marijuana, lingerie and lovers. But, chess remains her biggest addiction; director Scott Frank makes that clear.

The series is in a way similar and dissimilar to chess. There is no slow easing into the game. The storytelling is racy, without compromising on the filmmaking. The attention to detail is such that all games in the series were picked by Bruce Pandolfini, veteran US chess player and coach. All the matches played between Harmon and others were taken from the history of chess; actors had to memorise games for the series. Chess is unforgiving, so are chess fans. Frank & Co have done well to remember that.

Chess is not a cinematic sport. So the appeal for the average Joe lies exclusively in the telling of the story. Like Mira Nair’s The Queen of Katwe (2016), which was more about Phiona Mutesi than chess itself. So, this optimum mix of life, chess, attention to detail and a spoonful of CG is what elevates The Queen’s Gambit from just another chess miniseries to one of the most successful Netflix Originals of 2020.

For example, there is this bit where a young Harmon starts playing chess in her mind at night. As she lies in her bed, a chessboard appears on the ceiling of the orphanage dormitory and shadowy pieces slither silently across the battlefield. You feel a prickle of fear, as if you were a helpless bystander in the corridors of power. It does feel like Game of Thrones for a moment. It is in fact that, is it not?

Set against the backdrop of the Cold War, The Queen’s Gambit has the familiar thread of US vs USSR. Yet, not everything is predictable. For the general public, the only woman superstar of chess is Judit Polgar. Yet, here we have a female protagonist beating the clinical Vasily Borgov (Marcin Dorocinski). The series also brings to the fore a black saviour, Jolene (Moses Ingram), Harmon’s friend from the orphanage, and highlights the rifts within families in America’s picture postcard suburbia.