Women are not programmed to question what they want: Musician-activist Kiran Gandhi 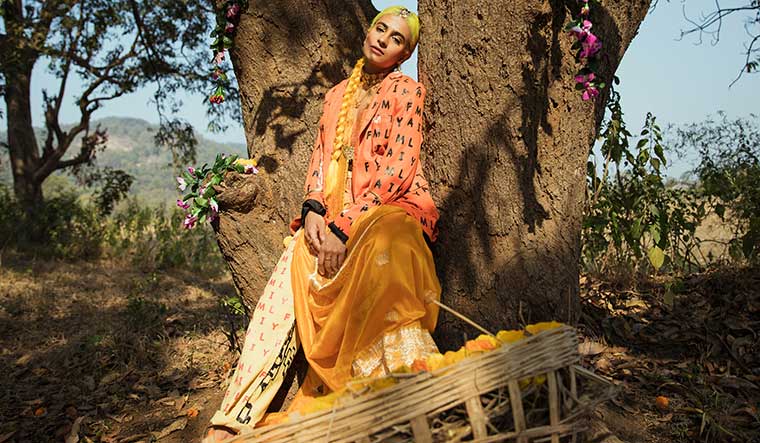 At the age of four, Kiran Gandhi remembers watching the Disney movie Aladdin (1992) and wondering why the impoverished Aladdin was the one on the magic carpet, saving everyone and living the best life. What about Jasmine? She was the princess who had everything going for her. Why was the focus not on her story? “Problematically, we always tell boys’ stories with three-dimensionality,” she says. “We tell girls’ stories in a very limited way where she either has to be saved, or is secondary to the main character. We never learn holistically about her journey.” Even as a child, Gandhi—an Indian-American electronic music producer, drummer, artist and activist now popular as Madame Gandhi—understood that it was a major problem in society.

“It was early on that my passion for gender [parity] started,” she says. This awareness developed with her growing interest in music. When she watched videos of songs she liked, she would feel upset about the sexualising of women in them. She wondered why men were not objectified in these videos. “I don’t have a problem with male fantasy, but I do have a problem with the fact that the majority of what we see is normalised misogyny,” she says. “And there is nothing to balance that. That is why in my music, I am constantly trying to combat these norms and re-depict the world I wish we lived in.”

She is speaking from her mother’s house in New York, close on the heels of the release of her latest music video—Waiting For Me. The video, shot in India in February, encapsulates everything that Gandhi talks about in the interview and as a TED speaker. It is directed by Misha Ghose and produced by Aastha Singh with Chalk and Cheese Films. The video features 10 women who act out their journeys of gender and bias.

“I knew that I wanted a female-led team,” says Gandhi, who has toured as the drummer for M.I.A and Thievery Corporation, and with Oprah Winfrey on her 2020 Vision Tour. “I think it is really important that we are telling our own stories. Otherwise, these jobs in production typically go to men…. It is not about reverse sexism. It is just about actively [countering] the inherent biases that exist in creative [and other] industries.”

The 10 girls, in dull grey school uniforms, robotically traipse through a building under construction. The tedium in the frame is broken by a spurt of florescent green ribbons and socks, symbolising the women’s closeted desires. 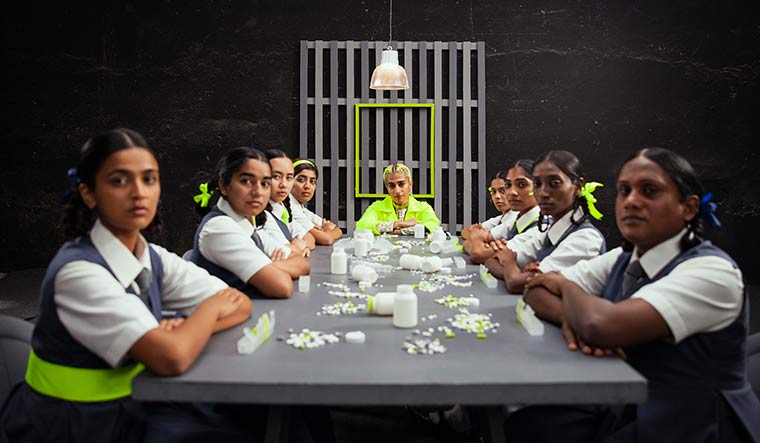 Dare to dream: Kiran Gandhi and the school girls in her music video Waiting For Me | Sajna Sivan

Gandhi studied at St Anne’s High School in Colaba, Mumbai, for three years from 1997 to 2000. “I actually loved my experience [there], dancing to different Bollywood songs,” she says. “Even then, I used to write so much poetry and take acting classes. I had a good time.” But she did feel limited by the rote learning and the lack of scope for imagination. In the music video, she celebrates the aspects of Indian culture that she truly loved, but also criticises the ones that she thinks are conformist. “Honestly, it is the culture of conformity around the world that I think is problematic,” she says.

After graduating in mathematics and gender studies from Georgetown University in Washington, D.C., she pursued an MBA from Harvard Business School. Of course, that taught her the basics of business and empowered her as an individual, but what it did the most was to help her question what she wanted. “That, honestly, we as women are not programmed to do,” she says.

The course also showed her how powerful patriarchy was, how we revere businessmen, and how we idolise the loudest voice in the room, instead of the most thoughtful one. It showed her how much work there was to do, the many problems there were, “and how I have felt unseen at times in those places when I would rather have preferred to feel like the voice that was most critically aware”. These feelings often reflect in her music. If Top Knot Turn Up aggressively attacks misogyny and the rules imposed on girls, See Me Thru is focused on queer femme.

Born to entrepreneur Vikram Gandhi and Meera Gandhi, the founder and CEO of The Giving Back Foundation, she is acutely aware of her privilege. In 2015, she famously ran the London Marathon without using a tampon or a sanitary napkin on the first day of her period to combat period stigma around the world. It sparked a global conversation about how we treat menstruation in various cultures.

“I think each of us has some degree of privilege, no matter who we are or where we are from,” she says. “Now, we have to acknowledge that privilege and include it to bring about social change. In my mind, I was in a privileged position and that is why I ran to combat global menstrual stigma. I knew that if I crossed the finish line, I would just do some laundry and be able to comment on global issues, whereas if I were in a more vulnerable position with less privilege, I might have got into life-threatening trouble for doing what I did.”

For a year after the free-bleeding run, she spoke about the notions around menstruation on various global platforms. “That is the reason we must be brave enough to acknowledge our privilege and do something with it,” says Gandhi. She says she will always focus on gender liberation “because that is my passion and that is where I feel my mission lies”.

Gandhi, who started out as a digital analyst with the record label Interscope Records, branched out into music and various other things later on. But after being a drummer her whole life, she found a stronger foothold in music with her EP, Voices, in 2016, followed by Visions last year. The last part of the trilogy, Vibrations, is now on the anvil. “I will always use my music and my public speaking as part of my mission to celebrate gender liberation,” she says. “Even if I show up for other causes, it is through the lens of gender.” She has been vociferously supporting the Black Lives Matter campaign “especially because it is a female-led movement and it is a queer female-led movement”.