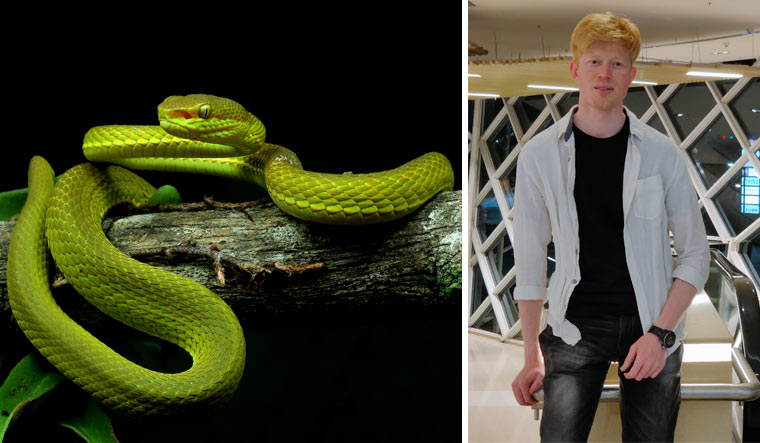 At last, Salazar Slytherin has a snake named after him. A stunningly beautiful green pit viper with an “orange to reddish stripe running from the lower border of the eye” to the tip of its tail. The Salazar Pit Viper (Trimeresurus salazar) was found in the lowlands of western Arunachal Pradesh by Zeeshan A. Mirza, Harshal S. Bhosale, Pushkar U. Phansalkar, Mandar Sawant, Gaurang G. Gowande and Harshil Patel.

“It was sort of a hat tip to J.K. Rowling for colouring my childhood,” said Mirza, lead writer of the paper that described the snake. “Childhood is a magical time in many ways, and she just made it more so for me and many others. People tend to think of scientists as nerds. We are not locked up in our labs forever! We live a normal life. And, Harry Potter is very much part of that life. I can still read all of the Potter books with the same amount of joy as I first read them.”

Author J.K. Rowling had imagined the fictional Slytherin as one of the four great wizards who founded the Hogwarts School of Witchcraft and Wizardry. In 2017, Rowling had tweeted that Slytherin’s first name came from the Portuguese dictator Antonio Salazar. In the early 1990s, she had taught English in Porto, Portugal, got married there and had her first daughter there as well.

One of Slytherin’s gifts was that he was a Parselmouth, a wizard who could talk to reptiles. He also established the namesake Slytherin House, with its coat of arms featuring an erect silver serpent against a field of green. For the record, Potter, too, was a Parselmouth.

Field biologists say that the morphology of green pit vipers makes it difficult to identify new species, especially in the field. Perhaps, one needs a touch of magic to do it. Mirza first got an inkling about this snake when a friend sent him the photo of a green pit viper from Pakke Tiger Reserve in Arunachal Pradesh’s East Kameng district. “I immediately felt that there was something different about this snake,” said Mirza.

So, the scientists set off on a 41-day expedition, which ended on August 5, 2019. “During the expedition, near Pakke Tiger Reserve, we collected two specimens of a green pit viper, which resembled T. septentrionalis (Northern white-lipped pit viper) and T. albolabris (White-lipped pit viper) in the number of dorsal scale rows and colouration,” Mirza wrote in the April issue of Zoosystematics and Evolution journal. The orange stripe was the only hint that these snakes could be new to science.

“Most green pit vipers are quite similar visually,” Mirza said. “Only the male Salazar’s pit vipers have the stripe. The females are virtually indistinguishable from other females, I would say. While the stripe’s colour is brilliant in young males, it tends to dull with age. Interestingly, the stripe disappears in preserved specimens.”

There was more magic waiting in the wings. This February, Mirza travelled through Europe, visiting natural history museums. At the Natural History Museum of Denmark, he was shown a list of specimens in storage and was thrilled to notice two specimens from Assam. When he was taken to the specimens, he felt a thrill—they were Salazar’s pit vipers, wrongly labelled as white-lipped pit vipers. “A Danish naturalist had collected these specimens from the region in the 1800s. As the region was called Assam in those days, the specimens got tagged thus. And the snake waited all these years for me,” quipped Mirza. “I also heard that two other papers just got rejected. They, too, were trying to describe this snake.”

Mirza feels that a common mistake made in taxonomy is to compare a specimen with a book description. “A book is a book, a starting point,” he said. “It was written by another human being. So, it is prone to errors or influenced by the conditions in which the writer viewed the specimen. One can only be sure when one is in the field with a live specimen and when supporting evidence like molecular data comes in.”

An Andheri boy, Mirza is pursuing a Master’s by research at the National Centre for Biological Sciences (NCBS) in Bengaluru. The NCBS is a part of the Tata Institute of Fundamental Research. Bhosale and Sawant are with the Bombay Natural History Society (BNHS). Phansalkar is studying at the Wildlife Institute of India, Dehradun. Gowande teaches at Pune’s Fergusson College and is pursuing a PhD at MES Abasaheb Garware College. Patel is a research fellow at the Veer Narmad South Gujarat University, Surat.

Salazar’s pit viper is the second new species of snake to come out of the 41-day expedition. The first one was described by Bhonsle, Gowande and Mirza. They found the non-venomous burrowing snake under fallen logs inside Tally Valley Wildlife Sanctuary, Arunachal Pradesh. It was named Trachischium apteii in honour of Dr Deepak Apte, marine biologist and director of BNHS. The description of a possible third new species is also in the pipeline.

With the Covid-19 pandemic sweeping the world, scientists are back in the limelight. And, Mirza is thrilled. “I have always felt why a sportsman or an actor should get all the adulation,” he said. “A scientist who brings you a new medicine is as much a rock star as any of them.”

The recent discovery of many new species in north-eastern India underlines the rich biodiversity of the region. It also shines the spotlight on potential infrastructure projects that threaten this Eden in the east. This year the Arunachal Pradesh government cleared a Rs2,500-crore project to build a 693km-long highway which will run through Pakke Tiger Reserve. And, last year, the Union government greenlit the Rs28,080-crore Dibang hydropower project in the state. When completed, it will be India’s largest hydropower project and the world’s tallest concrete gravity dam. It will also submerge 8,865 acres—much of it will be forests.