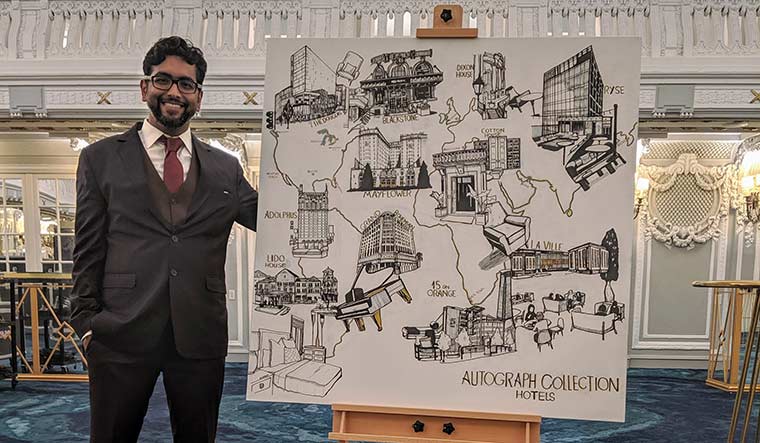 When Kolkata-born, US-based illustrator Nishant Jain sketches the city of Chicago, he might as well be reading aloud from Carl Sandburg’s poem on the midwestern metropolis: “Come and show me another city with lifted head singing so proud to be alive, and coarse and strong and cunning.”

On an Instagram entry, hash-tagged ‘art of isolation’, Jain brings alive the South Loop neighbourhood of Chicago. As a lockdown ritual there—started in early March—residents blast radio songs, and sing, dance and wave flashlights every evening at 8pm from their balconies. To Jain’s surprise, the tradition of singing and dancing continues to this day. The spirited response of his neighbours to Covid-19 has found an expression in his vivid sketches. In another Instagram post, Jain had surreptitiously drawn an ambulance under the same apartment building.

“In this city, you cannot run out of creative inspiration,”says Jain. “It is one of my life’s big missions to publish a big book of ‘Sneaky Art’made in Chicago, because I find every corner of this city worthy of art.”

Jain—who ditched his PhD course in neuroscience to become a writer-illustrator—has perfected a method of sketching that involves recording accidental revelations in unfamiliar sights and scenes. The 32-year-old calls his style of sketching as ‘Sneaky Art’, for the illustrator is unobtrusive in his ways of capturing the outstanding details in the ordinary. And the sneaky artist is gradually sneaking into the limelight. Some of his works have now found place in the iconic Blackstone Hotel in downtown Chicago. His works have also been published in newspapers including The Times in London. Jain was an official artist at the Jaipur Literature Festival’s international edition in Boulder last September, and his current projects include a number of private commissions across the US.

It was while living in an obscure part of the Midwest—Eau Claire, Wisconsin—that he shaped his signature style. His pen-and-ink sketches on Eau Claire resulted in a book titled Sneaky Art of Eau Claire. “I set about understanding this utterly foreign environment with my sketchbook,” says Jain. “I would sit in the parks, cafes and bars to observe people and their activities. Sneaky Art of Eau Claire was started as a way to continue my self-education, but soon evolved into a cathartic exercise.”

Jain started a stick-figure webcomic in the final semester of his bachelor’s degree at Manipal University. XKCD by Randall Munroe was the first webcomic that caught his attention apart from Wondermark and Hark, A Vagrant. He counts the works of graphic novelists Alan Moore and Jacques Tardi among his inspirations.

While lockdown has hampered his natural style of working, Jain has found ways around it. He draws live interviews and conversations from Twitter and Instagram. He teaches ink-art on social media. He has also started a free, work-from-home series where fans send him photos of their DIY set-ups in home quarantine. Physicians on after-work Zoom calls, people jostling for workspace between pets and kids, or the jerry-rigged workstation of a Wisconsin local radio host who records in the closet with clothes over her head to dampen outside sounds—all find their lambent likeness in Jain’s illustrations. Some have insisted on paying, but Jain is using his art as a healing tool. “For so many people, the home-office separation is sacred, so these times are especially stressful. I am glad I can give something to them that alleviates this.”