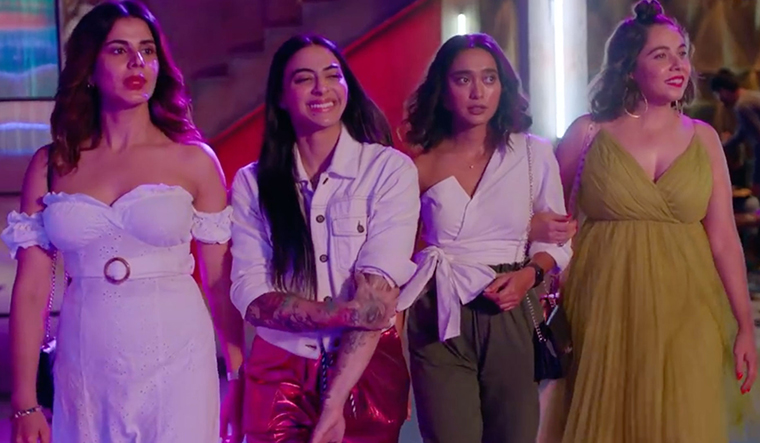 The first season of Four More Shots Please!—the home-grown version of Sex and the City—ended on a dramatic high. With a heavy dose of sex, alcohol, glamour and chaos, the show was messy in its closing. The ideal place to pick it up in the second season would have been when things are rosy again, so that the series could go back to its template of four city girls bonding over shots of fancy liquor.

It is not a surprise then that the second season begins with a desperate call for help from one of the women, which brings all of them together in Istanbul. The grind is the same—each has her own issues. There is the investigative journalist Damini (Sayani Gupta), who, after struggling for a while with a news start-up, is now writing a book on a judge’s sudden death. The two men who fight over her—Dr Warsi (Milind Soman) and the ultra-rich bartender Jeh Wadia (Prateik Babbar)—are good eye candy for sure, but nothing more. The rivalry between them culminates in a brawl which is amusing but pointless, not adding any depth to the story.

There is nothing much to surprise you in the story of Umang (Bani J) as well, a runaway rebel from Ludhiana who comes out as being bisexual in the first season. However, if the conversations about the LGBTQIA community in the first season sounded gimmicky, they have more authenticity in the second. A lesbian relationship between Umang and Samara (Lisa Ray) is treated in a nuanced way, and that is the good part.

Just like in the previous season, the most enjoyable and believable story is that of Anjana (Kirti Kulhari). She has to contend with gender bias at work while, as a recent divorcee, striving to be a good single mother. In the second season, she is more at peace with how things are. Kulhari’s subtle portrayal brings alive the insecurities of a single mother, and the vulnerability of opening yourself up to a new relationship. Samir Kochhar plays a delectable part opposite her, elevating her story arc.

However, the real surprise in the show this time is Maanvi Gagroo as Sidhi Patel. Her entry is loud, with oodles of uninhibited sex. But the evolution of her character over the 10 episodes is revelatory. She comes of age in the truest sense, realising the power of saying no, understanding the dichotomies of life and confronting difficult situations.

The show, in this season, has improved and shed its contrived outlook. But there is still a lot that is needed to make it more relatable. And perhaps it will be in the next season, if the cliff-hanger in the end is anything to go by.