Live coders who create music through computer codes are coming out 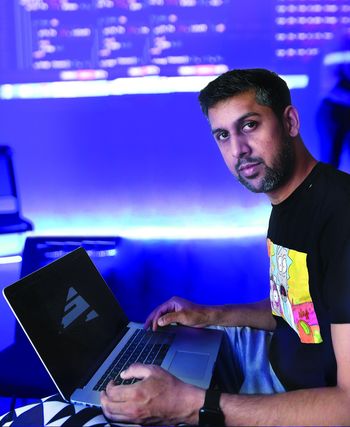 Codes and chords: Abhinay Khoparzi, one of the pioneers of the algorave movement in India | Imaging / Deni Lal Photo/ Janak Bhat

“What is an algorave?” asks Alex McLean, a global pioneer of the algorithmic dance culture, in a TED talk. “It is people making code live that produces music and visuals that you can dance to.” McLean created TidalCycles, a live coding software, while researching Indian tabla rhythms as a postgraduate student at Goldsmiths, University of London, in 2006. Since then, algoraves have snowballed from a niche musical movement to a massive underground phenomenon.

In his TED talk, McLean gives a demonstration. What he codes can be seen on a large projector screen onstage. He starts with a basic code that generates a repetitive electro beat. Then he modifies it—typing digits, brackets and figures that alter the simple rhythm into various permutations of techno, trance and other kinds of music. Algorithmic music is much like traditional electronic music, except that it has an unstructured, raw feel to it, what McLean describes as “messy” and “glitchy”. But the best part is the “creative feedback loop”, where the coder is able to tweak the music in real time by modifying the code according to the reaction of the audience.

“One of the problems with electronic music is that people do not really know what is going on in the machine,” says creative technologist Abhinay Khoparzi, one of the key people who introduced the algorave culture in India. “With live coding, we are ‘opening the box’, so to say, so that everyone can see what we are doing and how we are doing it.”

Live coding has been around for a while in the avant and art spaces in India, but algoraves—in which coding is done in a live setting and projected on large screens so that people can see how the music is being made—are relatively new. In 2018, when the Goethe-Institut in Mumbai was curating an exhibition titled Open Codes, trying to bring together live acts that used programming as an artform, Khoparzi got together with Mumbai-based artist and filmmaker Dhanya Pilo to form Algorave India—a collective of artists, programmers, designers and musicians who use creative coding techniques. That collaboration led to India’s first algorave event—Fat Finger Mayhem—in Mumbai. A few independent algorave events were later organised in Bengaluru, Delhi and Pune. The Facebook page of Algorave India, a kind of rallying point for the live coding community here, has nearly 250 members today.

One of McLean’s core philosophies, which has been the backbone of the algorave movement in the world, is to make it as open as possible. Most of the live coding software, like Sonic Pi, TidalCycles and Gibber, are open source and anyone can access them, a kind of “copyleft culture” that Khoparzi and most other live coders love. “We always show our work,” says Khoparzi. “After each performance, I put up my performance code online. Let other people reinterpret my work while I go and explore something else.”

Other than the music, there is also a visual component to live coding. You can use code to project the zippiest visuals that match the mood of the audience and complement the music. This is what Pilo specialises in. She says that with the musical, video and interactive elements of live coding in a dance setting, the possibilities are endless. “It is not like the traditional DJ/VJ kind of scene, but rather, more like an opera [where various instruments are made to harmonise],” she says. “Eight different speakers can produce eight different kinds of sounds. There are multiple projector screens, space acoustics and sensors that can make the light and audio react in different ways through machine learning.”

Many algoraves take place remotely, where you can sit in one place and perform in algorave concerts in another part of the world. Khoparzi, for example, is part of an intercontinental band called Supercontinent, with members from different parts of the world like Mexico, Canada and Israel. Mexico, according to him, has become quite the hub of the algorave culture. “In these cross-cultural collaborations, each of us can contribute code creating sounds from our specific culture, which can then be accessed by live coders from other cultures and integrated into their music,” says Khoparzi. He refers to a remote performance in which the lead live coder was coding while on a camping holiday. 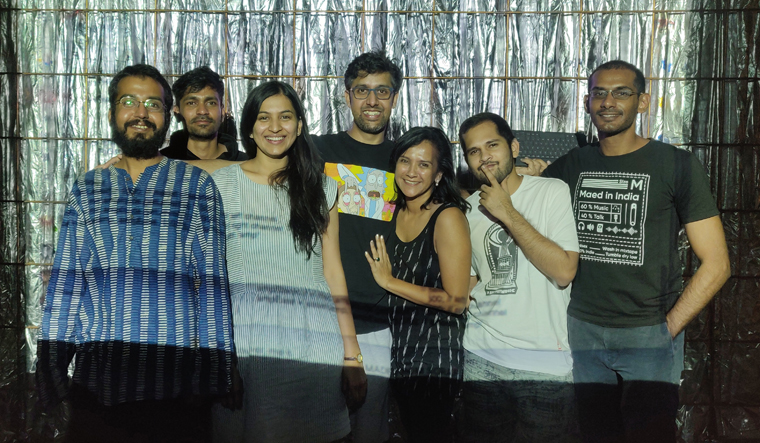 E-music for all: The Algorave India team at a music festival in Pune

Pilo was once part of a remote performance in which 17 visual artists across several continents simultaneously logged into live CCTV networks over 24 hours. The visuals were relayed to a website and displayed live at a European art gallery. Anyone anywhere could click on the link and watch the performance.

Another interesting characteristic of the live coding community in India is how egalitarian it is. “We want to make it as inclusive as possible, ensure that gender ratios are better than in the regular electronic music scene,” says Khoparzi. “With algorave, people get hung up on the word ‘rave’ and how that is connected to drug culture. It is not like that at all. Algoraves are just all kinds of people coming together to make fun things happen.”

That is one reason why the first all-women algorave was held last September in Delhi. One of the performers was Ambika Joshi or ‘Computational Mama’. She is a project manager for museums who turned to creative coding after she became pregnant two years ago. “That time, I made friends with a group of creative coders on Instagram,” she says. “I thought that algoraves would be wild and not my thing at all. But once I learnt how to create live-coded visuals, it all became very interesting.”

According to Khoparzi, eventually algorithmic rave culture will find its way into the mainstream, but coded music, in some form or the other, has always existed. It is simply a form of communication. In that way, live coding is not about creating a new genre of music. It is simply about stripping away the interfaces and exposing a kind of ancient, primitive beat that has always existed in time.