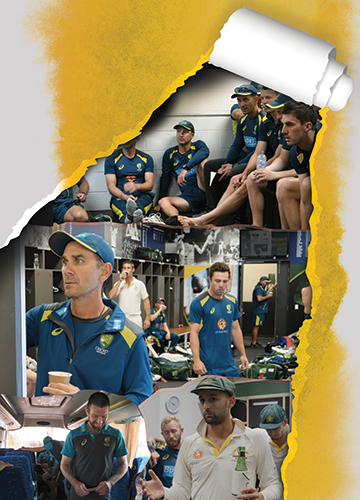 Alex Carey: “They don’t have Corona... They have light, Kingfisher light.”

Aaron Finch: “That’s probably what Maxie should drink, to be fair (laughs).”

Glenn Maxwell: “Unbelievable. He hasn’t said this many words all tour.”

Australia had just won their first game of the 2019 ODI tour to India, and captain Finch had, earlier in the day, hit 93 to arrest a horrific slump.

The team had had many demons to slay since the ball-tampering incident in South Africa, and this night was one of the bright spots in their journey to redemption. They were, at last, celebrating.

It is tough asking most cricket fans to root for the Baggy Greens. It is downright mad to ask this of the English. Yet, this is what The Test tries to do.

The Amazon Prime series starts in May 2018, when former opener Justin Langer was made head coach of the team in the aftermath of the sandpaper incident. A crew, given unfettered access, follows Langer’s men over the next 16 months, till the end of the Ashes series in England.

Australia have been the Goliath to many a David, which makes it strange, in a good way, to see them as the underdogs here. Especially in the scene where, in their first Test series after the ball tampering blot, the “mighty” Aussies celebrate a draw against Pakistan in the UAE.

The series, eight episodes long, is peppered with such moments. Be it the Australian players sitting in a bus, laughing along to abuse hurled at them by English fans, or the un-bleeped expletives they unleash while entering the dressing room after getting out. There are the standard tropes—dramatic music, slow motion, talking heads—but there is also an underlying earnestness to the endeavour.

The overarching aim of the series is to portray the Australians as a new unit.

And here was Langer, who, as a player, was part of a golden generation that rarely lost—and could never have been the subject of such a series—taking over a team that was looking for wins as much as respect.

In the absence of Steve Smith and David Warner, there is an increased focus on team building, and on recreating the image of the team. We are given glimpses into coaches’ meetings and dressing room talks, where we see this discussion happen.

Langer’s mantra is “No abuse, only banter”, and the series devotes a lot of time to try and soften the image of the Australian player. The era of the “beer-guzzling bully” seems to be done, and in focus is the bromance between Marcus Stoinis and Adam Zampa. They make and drink coffee together, hug and kiss each other on the cheek after a win and proudly proclaim their love for each other. There is also the cute student-mentor relationship between Smith and Marnus Labuschagne, for which the latter is playfully teased. For Indian fans, the highlights would be the episodes about the Test series win in Australia. From Langer calling Virat Kohli the greatest batsman he has ever seen, to captain Tim Paine asking his players to totally ignore him, there are juicy nuggets galore. There are also scenes where Langer talks about fans mobbing them in India, and even turning up as “fake room service” to ask for selfies.

There are lessons for the BCCI and Indian content creators, too. Cricket Australia, which has co-produced The Test, is known to use its media arm to good effect. It regularly puts out highlights and other content on its YouTube channel, the comment sections of which are filled by Indians.

Yet, India is yet to put out something like The Test. Yes, there has been Roar of the Lion on Hotstar and Cricket Fever: Mumbai Indians on Netflix, but these were, respectively, a love letter to M.S. Dhoni and the Chennai Super Kings, and an ode to the Mumbai IPL team. The element of national pride is the secret sauce that can elevate such offerings, especially in a country actively seeking reaffirmation of its greatness.

Overall, The Test is a public relations exercise done right. There are some issues, like Warner’s re-integration into the team not being fleshed out (there had to be tension there), but not enough to derail the watching experience. For instance, you cannot help but side with the Aussies when Smith, after being hit by a Jofra Archer bouncer in the Ashes, comes back out to bat, and is still booed.

Towards the end of the last episode, the Englishmen and the Aussies—“the colonisers” and “the convicts”—share beers and laughs in the changing room after the Ashes. It is a reminder, seemingly aimed at English fans, that sport is just sport and that the two rivals are just rivals. Not enemies.

P.S. Watch Crossing the Line, the SuperSport documentary on the ball-tampering incident, available on YouTube, before starting The Test.

THE TEST: A NEW ERA FOR AUSTRALIA’S TEAM