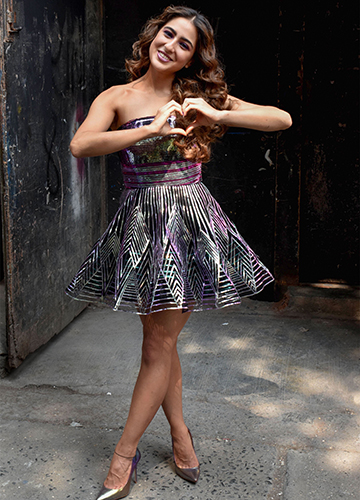 Sara Ali Khan might be only three films old, but she is no stranger to fame. She is the granddaughter of Mansoor Ali Khan, the ninth nawab of Pataudi, and the legendary Sharmila Tagore, and the daughter of veteran actors Saif Ali Khan and Amrita Singh. Whether it is going deep-sea diving in Maldives or leaving the airport in track-pants, everything the young starlet does seems to be sacred ground for her 18 million followers on Instagram. Here, she talks about her latest film, Love Aaj Kal, rumours of dating co-star Kartik Aaryan, and her journey in films so far.

A/ It is a relatable film which depicts how different love is today than it was earlier. I think women have changed and evolved. They have a voice now. They are more forthcoming about their desires, whether it is physical intimacy or financial independence. My character, Zoe, is trying to find a balance between love and her career. She is a single mother who has these dreams for herself. There is an inner Zoe who is a soft romantic and an outer one who is very pragmatic. The movie is all about her conflict.

Q/ There were rumours of an affair with your co-star, Kartik Aaryan.

I think he is a giving co-actor and I admire a lot of his work. If I am being honest, Sara Ali Khan and Kartik Aaryan did not interact on set. [Our characters] Veer and Zoe did. Imtiaz (Ali) sir is such a strong director and a visionary that he does not allow space for anything other than exactly what you are supposed to feel. It is one thing for a director to understand an emotion, and another for him to make you feel it.

Q/ Who has been the greatest influence in your life?

A/ My mother, who epitomises strength. She is my inspiration. If I can be one-tenth the person she is, and exude one-hundredth of her strength, I think I will be more than ok.

Q/ How has your journey so far been?

A/ About four years ago, when I was 96kg, I told my mother that I wanted to become an actor. I remember her looking at me and saying, “What are we going to do about it now?” I went to the gym. I did three crunches with a weight; I could not do more. I left the gym, came home and said I did not know if I could do this. Then I woke up the next day, went back and did four crunches. Then five and then six....

A lot of people told me that if I wanted to become an actor, I should try this thing called a grooming school. So one day, I went to a grooming class. I was told that when I was at a party, I should stand as if a thread is pulling me up. Your body language should be like that, I was told. I left politely because I realised it was not going to fly with me. My mom always knew that I would not confine myself to what was expected of me. In the industry, I decided to just be [myself], instead of this stereotypical person that I was [expected] to be. I think these are things people are enjoying, appreciating and celebrating.